This is a very old photo of a Prize Winning Pig. My Great Grandfather is the fearsome looking man standing at rear of the pig, & he bred the pig. My Grandmother looks to be about 10, & she is the 2nd from the left, with one of her sisters next to her, her youngest brother next, & her eldest brother on the right beside the two butchers, who are wearing the striped aprons. 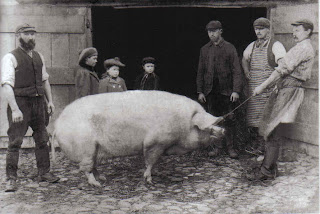 I have no idea how old the pig was, poor old thing. She is obviously female, & her breeding days must have been done. I cant bear to think she won a prize, only to be butchered.

My Grandmother kept the Prize, which was a Cruet set, which is pictured here.
She also kept the photograph, & now I have the original, which my son, as a child, once scribbled on, in crayon. He took it to be restored for me, & has had these photographs taken from the cleaned original.


This is the cruet set, which is silver plated nickel, & I would imagine the containers are cut glass. They gleam like crystal when the silver is polished.

I have always loved it, & when I was a child, I used to spend hours cleaning it, & polishing it, so my Grandmother gave it to me. I still love it, & I still enjoy cleaning the silver. 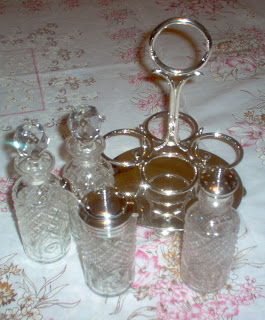 It is inscribed "Thorley's Special Prize" & my Grandmother seemed to feel that it was not the first prize. 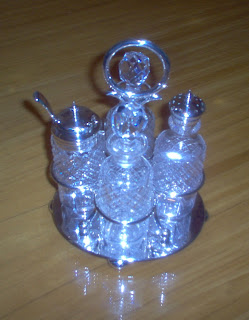 I have never used it, & I dont think my Grandmother ever used it either. But I have always found the story behind it intriguing, & have always kept both the photograph & the cruet set as 'family heirlooms'- much to GOM'S amusement. But even he, agrees it does look nice when it is polished & gleaming.

It comes apart for ease of cleaning, & the top is held onto the base with silver plated nuts to screw onto the legs of the container circles.

My Grandmother said her father was a very strict man, who didnt tolerate fools- or children, lightly. He was disinherited by his family, because he fell in love with one of the servant girls. He got her pregnant, so he was told if he married her, he would be cast out from the family. So he defied them and married his sweetheart anyway.
They lived in Yorkshire, & my great Grandfather must have leased or bought his own farm, & they went on to have 8 children. My Grandmother was the eldest girl, & she had twin sisters, another young sister and her four brothers. Apparently her father never got on very well with the eldest son, & he emigrated to New Zealand as soon as he was able. Why New Zealand, I dont know.
My Grandmother told us that when she was a young girl, she loved horse riding, & she used to ride along beside the train, trying to beat it. When her father found out she was punished severely.
She said he used to go to Market once a week, I think & he would drink too much ale, & he could be quite cruel when in his cups. ( I once heard him described as a bad tempered little Yorkshireman, as apparently he was not a tall man.) She said one day he fell from his cart on the way home from Market, & it snowed. If it hadnt been for his horse standing over him, protecting him, he would very likely have died in the snow. It must have made him 'see the light' as it were, as he never drank again, & didnt approve of anyone else drinking either.
My Great Grandmother suffered very badly from Arthritis, & so when the family Doctor advised a better climate could be found in New Zealand, they all moved there, but of course the climate was far from beneficial for the poor old lady. But I am sure she was happy to at last be reunited with her eldest son, who had established himself in NZ already.
One by one the off spring married, but one twin girl, Mary, contracted Polio when she was 18. She was engaged to a young man, but the engagement was broken when Mary became ill. She recovered, but one foot was left deformed, & she walked with a bad limp for the remainder of her life, & became the 'family nurse'. She nursed her mother until her death, then she was carer & nurse to the cantankerous old man, who my mother always told us was very grumpy & not nice to be around. When the old man died a cousin came & stayed with Mary, & he had been mustard gassed in the first world war, so he couldnt work, & suffered a great deal with his lungs.
He eventually died, & poor Mary was left all alone. It must have been very hard for her, after her life of sacrifice for everyone else. I remember her as a beautiful natured woman, with white hair, & very thin. She was always so kind, & we loved her, as kids. I also remember the cousin Harry, who was quite nice too, but he wheezed a lot, & I think he found it hard to speak for any length of time. They always kept a sheep in the yard of the house, to keep the grass down, & we were always warned to beware the 'sheep marbles' out on the grass.
I have been tagged for the Thinking Blogger award, by the lovely Julia, of Camille's Place, so I will have to have a think, wont I?

Your stories are always so interesting and this one is no exception. Keep them coming.

Laughed about the lawn-mowing sheep! We've often thought a few sheep would be a much more environmentally friendly lawnmower than the John Deere!

These are good stories, a slice of time and place that is rapidly receding in the rearview mirror.

One wonders how much of your great grandfather's temper was due to being in conflict with his family because of doing the right thing. It would have been so easy for him to turn his back on your great grandmother and leave her to deal with the consequences of her pregnancy, yet he didn't. I'm glad of that. It speaks well of him.

Poor Mary; I do hope the days of young women being expected to sacrifice themselves so as to be the family nurse are mostly behind us now.

I agree with you; the photo AND the cruet set are family heirlooms. If nothing else, they should be cherished in memory of the pig!

Meggie -- Nice to see the old photo . Our great grandfather had doubts and did query the parentage of his eldest son initially , -- I have a photo of the old fellow with our grandmother in later years -- he was very short - . being shorter than her . He was also very strong and fit and he lived until almost 95 . Mary knew him well and told me he was pretty mellow by the time she got to know him . The middle two sons both became Bacon Butchers, amongst other things they did and the youngest , Frank was a carpenter who died , tragically in the first World War of pnuemonia , after having been run over and crushed while fitting chains to an army truck in , I think , Eygpt . He was only 18 and I suspect our grandmothers favourite brother . She named our eldest uncle after him too.

Hi all,
J, I have so many stories, but I always think others will be bored witless reading them!
M, Sheep are great, they dont demand much, & are far less smelly than goats for keeping the grass at bay! They can be quite affectionate pets too, & very responsive to treats!
Tanya, I increasingly feel I should be a vegetarian, as I have grown to believe I should thank the poor animal that gave it's life for my carnivoressness, each time I eat the flesh of an animal. I cant help but think of it's life, -given for what, but greed.I find myself silently giving the animal's spirit a 'Thankyou', for it's life.
H, You are right, your memory is better than mine, & it was Egypt where the young & handsome Frank lost his life, from the crush wound. I feel our Grandmother never stopped grieving his death, as we dont, our loved ones.

Bored witless? It's fascinating to flesh out -- as it were -- a family tree, even someone else's. You are keeping a huge treasure for all those who will follow you. To have a clarity of one's heritage is beyond priceless.

I love your stories too :)

I can't get over the size of that pig, you know!

I just love the stories of our pasts what a treasure the cruet set is and the pig well "she was big!" ((smiles))

thank you for sharing that story I love the past and what they went through then.
lee-ann

another story that i enjoyed reading. I can't believe how big that pig was. I think i would have been too afraid to stand beside it.

a Great story Meggie.
I am never bored reading your stories..stories future generations would love read I'm sure
What a huge pig,

It is indeed lovely ... but who the hell enjoys polishing silverware ?!

You can come and polish mine if you like ;)

Your stories take me back to another time, and I enjoy every word. I remember my Gran having a cruet set like yours, a fixture on the dining table (before bottles of ketchup and brown sauce... lol).
At least the old man had married the girl, despite what his family said, good for him.
I have traced my family history on Dad's side to the early 1700's and dearly wish I had stories like this to go with the people I have disecovered.