I am going on a Road Trip, with my son.
We have decided to take the opportunity to visit some rellies, who live at the top of this State, New South Wales.
This is a trip that Gom and I had long planned to take, but somehow events conspired, and we did not take the journey.
Son and I are planning to be very flexible, and just take it all as it comes. We have no destination, apart from the rellies at some stage. We will see where time and tide take us.
I have always wanted to do a trip this way. Leisurely and slowly, with no rush or time limits. And no definite  destination.
Gom was a man of 'plans'- though he seldom let me know of his intentions, and calculations, before the journey was begun.
We would set sail, and he would then inform me that we would be at So & So by 5pm and heaven help us if we needed a comfort stop, or were dying of hunger, it was all go go, until we reached the destination, and we could wet ourselves or suffer dehydration and starvation.
Arrival as close to his estimation as possible, was what the trip was about.
At times this was almost alright. Howcver there were times when it was breathtakingly, clenchingly,  uncomfortable, in the case of the toilet breaks. Hunger would often  make both the children & I grumpy to the point of misery. To say nothing of thirst, once we had used our supply of beverages.
The most horrible of these regimented trips was a time when we were booked, for the 6pm sailing,  on the Inter Island Ferry, which sailed between Picton, in the South Island of New Zealand, and Wellington, on the North Island of New Zealand. This was a four hour trip, and not always pleasant, as Cook Straight can be notoriously rough.
We left Christchurch in plenty of time to make a visit to his daughter, who lived with her mother, not far from Picton. When we arrived, our daughter was not home, so off went Gom, hell bent for Picton.
The children and I were starving, as well as needing a comfort stop, but there was no stopping Gom. He was very reminiscent of Toad of Toad Hall, behind the wheel of the car.
We reached Picton around 1.30pm, and Gom became convinced he could get the car a berth on the 2pm sailing of the Ferry. I told him that was all very well, but our needs came first, and with 2 young hungry children, we needed to refuel. Gom, not to be thwarted, dropped us off in Picton township and motored off to the Ferry.
Imagine my horror, when once more, relieved and refuelled, we ran to the dock, to find it empty and no cars in sight and the Ferry about to sail.
The children panicked, cried and felt abandoned. I felt quite murderous thoughts, towards Gom.
A man appeared at the car ramp, and beckoned us to 'Come this way!'  'Has  father left you behind, haha?'
I spent most of that Ferry trip in aggrieved silence.
Thankfully, we spent that night in a Hotel in Wellington, but had Gom been alone, I am sure he would have begun the long drive up to Auckland immediately, upon driving off the Ferry.
**************
In other news, Beloved Brother has taken a Sky Dive.
I was rather horrified to learn he was to undertake this venture, and said to my Son that I have lost my sense of Adventure.
Son asked if BB was "adventurous", and I replied that I felt the word was "foolhardy". 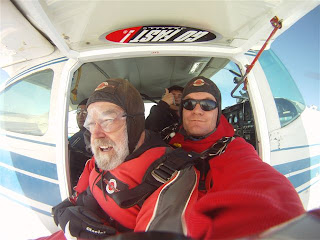 Here is BB about to leap from the plane, with his second born son, giving him the thumbs up, in the plane. Second Born's turn was to be next. 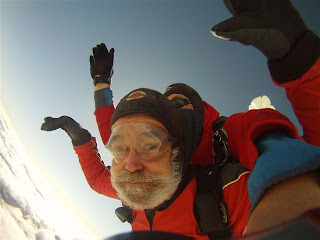 Here is BB flying. I wondered "Is this the face of terror?"
He tells me it was not, but remarked that the rush did strange things to his face and beard!
I told him I had visions of cheek flaps beating off his ears, but I can see they were well protected by the helmet! 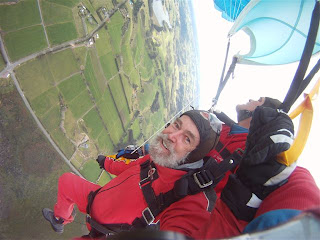 Here he is, in what he tells me is the magic part of it all, flying and soaring above the earth, with the panoramic view, and the wonderful feeling of weightless flying.
He did land safely, and says he would do it again, in spite of an initial exit, halted, due to a 'problem', and a landing to refuel before taking off again, for his actual jump!
Second Born says he will never jump again.
I wondered how the photos were taken, and BB tells me the tandem man has a camera strapped to his left wrist, hence the wonderful shots of all the action.
I do admire BB his bravery, (or foolhardiness.)
Of course, I am extremely glad he enjoyed it all, and landed safely back on land.
In other joyous news, he is to be a grandfather again, so he is looking forward to that, very much.

One of THOSE drawers.

Do you have one of those drawers?
You know the ones that contain anything and everything, and seems always to be overflowing.
Gom used to despair at ours. He would always suggest I rid the drawer of really essential items, such as a tin opener which only partially works. But, it does have a great bottle top remover!
Or, the egg slicer, that Gom insisted was seldom used, which would then, produce a flurry of boiled eggs to be sliced to use in salads and such. Or, the cheese slicer, which I doubt has ever actually been used, but then... one never knows when it might be needed.
There are the collection of non stick-surface-safe-utensils. Spoons, spatulas, fish slices, forks,  and tongs along with the vegetable peelers, with brushes and other pitting/gouging features. I will admit the vegie peelers don't seem to figure largely on the list of  'most used', but on the other hand, they are handy if we have visitors, who wish to peel or slice.
Being left handed, I am rather protective of my pet vegie peelers. They almost become rendered utterly useless if right handed people use them. My knife collection is sadly lacking in left handedness, due to the righties in the family using them all the time.
Then there are the seldom used Pizza slicers, the sandwich cutter, the knife sharpener, from my Grandmother's era,  which still works really well, for me at least.
There are the garlic presses, some of which are almost useless. The ladles, the whisks, the spoons for various purposes.
The Parmesan grater, which is almost more trouble than it is worth.
The really blunt kitchen scissors, which are really just large, useless,  'normal' scissors and should be discarded. 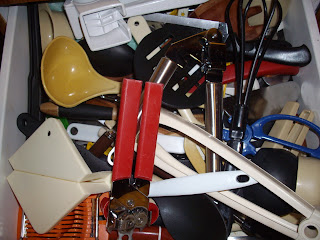 One of these days I WILL clear this drawer out, and discard the useless items.
It won't be today.
**************
I bought a chilli plant for my son B. He loves chilli, and this plant was named Bruce.
Bruce did remarkably well, for me, who has permanent brown thumbs. Bruce bore two lots of fruit, and they were nice and mild and provided son B with some tasty zing to his meals. 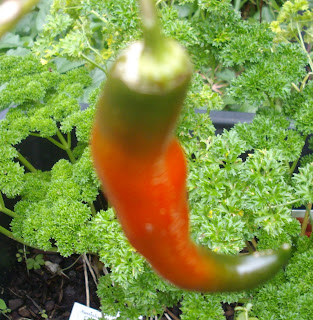 You can see, the last baby is rather deformed and late to ripen. However my brown thumbs have actully produced the Parsley in the same container, so I am pleased about that. 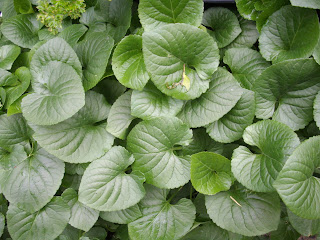 The violets continue to produce healthy looking leaves with much vigour, but nary a flower shall grace their parents. 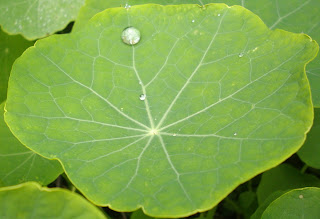 The Nasturtiums valiantly try to grow, and they produce gems of dew, and even have a few buds, which will no doubt flower in due course.
Unless, of course they are ripped out, in the course of a 'garden makeover', currently being undertaken by son B, with a little help from me.
***************
Small Grandson, who is growing up so quickly, it frightens me, informs us he loves classical music, and jazz is really his favourite, but he hates heavy metal rock, and loud guitar. What a sensible lad!
Ottmar Liebert, Duende del Amor.
Posted by Meggie at 8/06/2011 09:49:00 pm 20 comments:

It seems I am paralysed, which may seem like an insult, to people with physical disabilities.
My paralysis is, I think, in my mind.
I seem to have days where I can think, and can contemplate,  a life to be lived.
But then come the dark days, when rising from the coccoon of my bed seems terrifying, and I cannot see the point in even trying to pretend I am functioning.
I am not sure whether I should blog about this. It would seem, somehow to be, almost obscene. Other people seem to gather their wits, and carry on with their lives.
I could offer no judgement or comment on other's grief path. I suspect we all have to follow our own path in the healing, of a loss by death.
*************
We have had a birth in the family, which is to be celebrated, with much Joy. 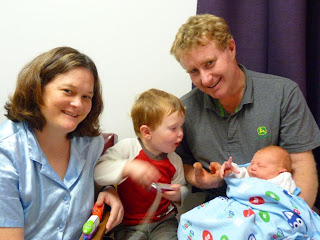 Mum, Dad, and proud Big Brother. We welcome, little Hayden to our wider family.
A daytrip to a soothing beach was pleasant diversion today.
We sat, and listened to the soft swash of the waves, on the small serene bay. We watched young children delight in the sheer joy of being alive, with parents who doted upon them,
The feel of the sand, and the sun, and parents adoration, seemed so full of joy and happy memories in the making.
Ah to be wealthy, and able to afford Real Estate, in that small but beautiful community.
Dreams are free.
New life is always a joy, and this little boy will bring enormous love, I am sure.
Don McLean: And I Love You So.