Gold comes in many guises.

I feel I have found golden treasure, and had not realised I had already found it, in a garden of my childhood.

It is the humble little Cape Gooseberry, as we called it in our youth. The little green lanterns would become brown and transparent, and we could see the beautiful golden berries within, ready to be eaten. 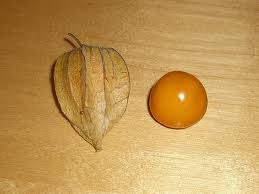 Here are some photos, taken/stolen from the internet Image files. I sincerely hope the people who own the photos are not offended at my usage of their images.

The Cape Gooseberries of childhood in New Zealand, are now 'Incaberries' living here in Australia. No one seems to have heard of them until now. How curious.

I discovered the 'Incaberries', in a beautiful beetroot, carrot, pinenut,  & coriander salad. I was amazed at the delicious flavour these mystery berries imparted. A wonderful sweet and sour flavour, so intriguing to the taste buds. They are touted as being a 'new' wonderfood, and beneficial for all sorts of healthy reasons.

So, of course, I Googled them and discovered that they were in fact, the berries we had loved as children.

I wonder Ali, if you read this, you will remember them? Or perhaps even still have a plant or two. As you are now living in the region where I grew up, I could not help but think you might know of these wonderful little berries.

I was intrigued to read they are a South American fruit, mostly grown at high altitudes. Of course, until I had the salad, I had never known they could be dried! We, as children gobbled them up as soon as they were ripe.

I reminded my beloved Brother of them, and he instantly remembered them with joy at the memory.
Now I am going to be wanting to source them, to use for my own salads.

More Gold was the sudden onset of gobbling Doule Chocolate Caramel Tim Tams. I have no idea what came over me, but before I knew it, I had eaten five in a row! Normally, I am not much of a chocolate eater, and can take it or leave it.
Gom was the chocolate lover.
Ah well, I guess I can now wear the Tim Tams as extra padding for the Winter.

In other, much less golden matters, I have been having some 'rounds'  with the local Council's garbage collection company. Two weeks ago, I booked a collection.
The week came and went, the garbage remained.

I rang to inquire what the problem was.
"Not a problem," said the SYT (Sweet Young Thing) "You are on a Wait list, and it will be collected in the next few days."

The days ticked past. Garbage remained.
Another call. Another assurance by another SYT that I was "Still on the waitlist."
Come the collection day, no disposal truck. No collection.

Many withdrawals had been made from our pile, but on the other hand quite a lot of deposits had been generously donated by other, swinish lazy folks.

A fair number of the scavengers had strewn rubbish over our lawn, and the street. I never object to anyone taking anything they can use. But please! Leave things tidy!
I spoke to a very pleasant man, who was collecting metal, who neatly repacked things after examination. I took him a further metal object to add to his collection. I do hope he uses some of the money he makes to buy himself some teeth for his head.

Mrs Nice Neighbour had booked a collection - after I had booked mine, as it happened. Imagine my horror last Friday, which is not the normal collection day,  when Mrs N N's garbage was collected, and the truck drove straight past our, by now disgusting, pile of 'stuff'.

I could not believe the truck drove straight past our lot. I had a laugh with Mrs N N about it, and we decided I am wearing a psychic "Kick Me" sign on my back, and we are both wearing psychic "Sh!t on Me" signs on our heads, since she had waited almost 2 weeks too.

The rest of the saga is too depressing for words. I have phoned the Council, who got a Garbage Comapny SYT to phone me today, with further assurance "Not a Problem"

(What is with this useless bloody phrase that the young keep trotting out, mindlessly.)  "Of course there is a problem!" I was practically bellowing, and since I was visiting a friend at the time, I frightened their various birds in the avairy, to say nothing of their cat, dozing on a seat. Their puppy had long since departed, I suppose fearing something might be deemed his fault.

We live on a corner block. Our actual road address has a 4 foot ditch on the side of the road. (In all the twelve years we have lived here, we have been assured by Council it will be paved and guttered, "Next year" Yes, next year, when the pigs fly over, I think to myself.)  Of course, our entry and 'frontage' are on the other street. SYT seized upon this as being the reason the garbage had not been collected. By then I was almost screaming.
"Surely the collctors can see it is not practical to place the garbage in the 4 foot ditch! Could they not use their brains to see the garbage as they drove past, and practically over it!!!"

We have had many collections in the past, without incident or problem. I am assured it will all be gone next Thursday. ???
In the meantime it will probably grow, as pickings are now very slim. None of the 'donations' seem to have been worth taking.
And our lawn is dying, but I suppose,  since it is mostly Bindii, that wont matter a great deal. GRRRR!

So, you may see, why I am looking for the Gold. Constantly.

An old favourite, Bread Truckin' down the Highway.

The Peaches of our Youth..

I stole the title for this post from an email my Beloved Brother sent me. We usually title our emails to each other, and some are hilarious, while others tell of darker matters.

In his email, BB was remarking that when we were young, the peaches, nectarines and plums all tasted magical, and their scent was so delicious, you were tempted to sink your teeth into the wonderful fruit.
We were lucky as we had a wonderful huge nectarine tree, and peach trees with both white and golden flesh.

And Tamarillo trees, and a wonderful huge passionfruit vine on an A frame trellis our Grandfather built. It was wonderful to sit under the vine, and indulge in the wonderful fruit in secret! Not that we were not allowed to eat the fruit, it was just the magic of hiding away, that was so appealing.

Now the fruit we buy is all uniform in size, lacks much in the way of aroma and the taste seems to have all but disappeared.

We try to buy Local, from a fruit shop that stocks the slightly spotted, or blemished,  and undersized fruit and vegetables, from local growers who can't send the produce to the Market. I can't really say the produce tastes better, though some potatoes and beans we purchased at a local farm gate were wonderful. I suspect they cost us more than a shop price, but the taste was worth the money.

Living in the past, some would say. Happy memories though, and the taste of the wonderful fruit seems to remain even after all these years.

I recieved a card, and some photos from  friends in Chrischurch New Zealand. The photos were of the friends' youngest son's wedding, and they were beautiful. I phoned them to say Thankyou for the card and the wonderful photos. These friends had been friends with Gom and I for a long time, and we had been with them when that youngest son was born.

'A' kept urging me to 'Come and stay! We will look after you, and you must think about living your life now'. I know the intentions of people are kind, and remarks such as this, are motivated by genuine caring. However after the phone call, I slipped into a deep depression, and realised I could never go back to Chch without Gom. It was his hometown, and I could not bear to see it alone, or indeed, in it's altered state.

I have many friends there who seem to have become accustomed to the continuing shakes and rolls. All have suffered damage to their homes, but they are still 'habitable'. All are promised repairs some time in the future. It must surely be unnerving to live in such uncertainty.

Such is the nature of my grief, I have patches where I think I am making progress, then find myself crying uncontrollably, and feeling so wretched. I dont know how other people make it through. I know this lovely lady, http://idlepersiflage.blogspot.com/ will understand how I am feeling, as she seems to have very similar feelings and experiences. (It is so long since I have blogged, I have forgotten how to link a site to a name only!)

I can hardly believe this year is underway.

I am desperately trying to regain some normalcy~ whatever that is, or will be, now.
I read other blogs, where the 'widow' (Odious word!) seems to be living on and enjoying life again. I suppose everyone is very different. I am trying various ways of coping with it all.