Life as a Cake Tin

Once upon a time, Cake tins were held in high esteem, and were reused over and over again.

Life as a cake tin was once quite a grand position to have. the cake tin being almost essential to life as we knew it. Cake  tins housed cakes. biscuits, shortbread, gingerbread, slices, all the good things.

At huge baking marathons, they would be used for the take- a- cake for the school cake sale day, or the School Fete. Of course the slightly inferior tins were used for those occasions. The Best tins would be kept at home for personal, and special use.

Pre Christmas, the tins would be filled with full rich Christmas cakes, with brandy added, and shut away to mature in dark cupboards, with DONT TOUCH!! warnings.

Short bread, and various other special biscuits and sweetmeats, would be stored in these tins, in readiness for the Special Day. Such things as Christmas Mince Pies would be stored away, usually in the same tin every year. I never understood Christmas Mince, and never will. I find it revolting.
Many tins were labelled underneath, with the name of the owner, so that they could be returned to the owner, after such things as Fair Day, Christening Day, Birthday, Engagement Party, sometimes for the small hasty discreet wedding when the bride was 'up the duff', and a quiet, discreet little marriage was deemed the best way to handle that little slip.

The joys of raiding the cake tins, while parents were off milking the cows, or coping with the hay making, and shearing time,  all that entailed lunches and  smokoes. Though surely if there were any stealing of cake or biscuits, baked specifically to feed the crews, there would be hell to pay and often very sore rumps. The humble jam sandwich was a much better after school snack option!

Sometimes the tins were used for less exciting objects, such as stamp collections - remember those?(Though I am sure the fanatical stamp collector would not regard that as a step down the ladder, for the humble cake tin.)
Or for button collections, ribbons, lace 'notions' which is really a word for bits and pieces and  oddments used for sewing or embroidery.

Perhaps, when they got really shabby, they would be used for nails, screws, corks, bottle tops, nuts bolts, small tools, or, bicycle patches, for those endless punctures on over full tyres.
Young boys would look forward to a 'Nanna cake tin' they were allowed to take for those endless treasures, such as bugs, pieces of string lumps of rubber, for making slings, to fire at each other in fun, or not always fun. Sling shots were apt to be banned, so they needed a good hiding place, so the 'Secrets' tin was a great hideaway from prying brothers or sisters.

AS time passed, and plastic became the new god for containers for all manner of items, inevitably cake containers, and the humble cake tin became old hat. The modern young wife wanted to have her kitchen containers to be matching. Green and cream was a popular colour scheme I think in those days of the '50s. Later came the glaring bright Burnt Orange, the Avocado, a sort of sickly green, also a mix of brights for various containers.
The very early plastic was looked upon with scorn. It smelt terrible, and no self respecting man was going to eat cakes from 'stinky poisonous plastic'. Perhaps they were right to beware!

As more time passed the plastic became slightly more refined, the horrible smell disappeared. Tupperware came to be, and every good housewife worth her salt had to have her Tupperware cake containers, and serving dishes, and all manner of other less noisy containers for her baking and cakes.

Children were actually quite delighted. It made sneaking cakes or biscuits a lot easier. The lids didn't clatter like tins!  Often the lids were much easier to remove too, which aided the stealth.

Nowadays it seems the cake/biscuit tin is very out of fashion. Any Op Shop houses plenty of orphan tins, which the retiring older generation have passed along. No place in small homes for such things. Always supposing someone could be bothered baking!

It seems a little sad somehow. My Son in Law gave me some delicious Shortbread for Xmas, and now that the tin is empty I suppose I should just throw it out, but I am thinking to repurpose it for storing batteries. You know those damn things you always fail to find when you need them. I am finding them in all sorts of strange places so I think a move to one location, will be a step forward. Plus the tin gets a new lease on life.

No pictures today. It has been such a dark grim day, it looked more like an English Winter day, than an Australian Winter day.

The term running on "E", dates back to the days when we lived in New Zealand. Invariably I was the one who drove the car to take the children to and from school, and to go to the nearest shopping Mall to get our groceries, etc.
Gom on the other hand, used the car for Hotel business, and other outings involving using the car. Therefore, it was agreed, he would be the one to see to the mechanical wellbeing of the car. Which included filling the car with petrol.

Imagine my wrath, when I would discover I was driving a car with a petrol indicator pointing to "E".

It would happen too often, and sometimes I ended up stranded, with children, on the road, with miles to walk to the nearest petrol station. Of course I would feel quite enraged.  Usually, I had to try to find a phone, to call Gom for rescue.
This was the days before mobile phones.

Well, you may say, why was I a slow learner? Why did I believe his faithful promises it would never happen again?  Why did I not check the petrol situation before I set out in the car? Well, I would reply, I was running a Restaurant in the Hotel, and would quite often be running a little late after the lunchtime clean up, to go and collect the children, so Gom's carelessness was the last thing on my mind. Plus there were no easily accessible petrol stations near our Hotel, which is why Gom agreed it was logical for him to fill the tank.

Often when we set out for long trips, Gom would suddenly discover, in the middle of nowhere, lo and behold! Somehow, we were once more 'running on E'! Many hours were wasted, while children and I waited for the return of Gom, after some trek into the distance to find some petrol.
When I would berate him for the fact he hadn't checked the petrol, he would blithely reply that he was sure we had enough to get to  our destination. "It is never empty when it says E!"

To say it was infuriating, is a huge understatement. I told all and sundry of Gom's habit, and it became a standing joke among our friends, that any life situation, when things were not going well, was a "Running on E" situation.

Much of my recent life has been running on E.

On to other topics.
This is a photo of Zane and Honey just owning the sofa, at my new home. 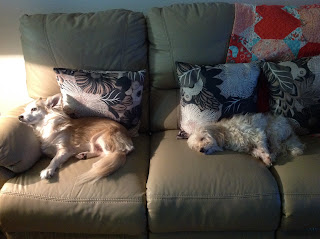 They seem to be happy enough leading happy lives, apart when I leave the house for any length of time. Zane has taught Honey how to howl and bark, which is odd, because they never did this, at the house. It is a real bother, because if I have to be out or away for any length of time, out of consideration for my neighbour, I need a baby...er dog sitter.

As I now have a date at last for my shoulder replacement, I am lucky enough to have a very good friend, who has offered to come and stay with the dogs for me. I am not sure how long I will be in Hospital, but it would seem overnight will be a tad too short.

I am booked to have the surgery on 10th September, which is rather close!
I am not sure whether to be happy or nervous.

This next photo is of Colin. He is my doorstop, used while I have the back door open. I did not make him, though I once upon a time would have. I decided he looks so sadly, I had to give him a name. 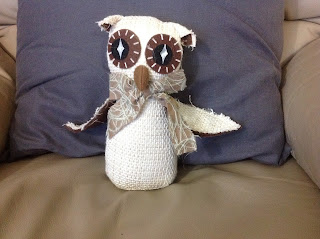 These are some tulips I bought myself.  They are over now, but they looked lovely while they lasted. I have been trying to get some pots in the courtyard area, to try to cheer the sad yard up. 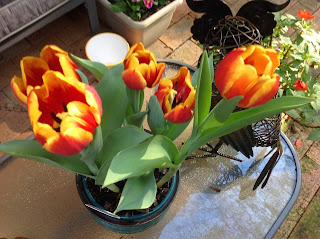 I also got some Polyanthus, which seem to last well, but as they have to be in a pot too, they are a bit sad looking at the moment. I have some herbs which seem happy, and some that are just bloody miserable looking!

The courtyard is a dismal failure at present. The sinkhole has still not been attended to, and the ugly bricks are all uneven, and now growing green. A maintenance man came to water blast the green away, as it is a danger, but when he saw the mess in the yard, he went away. Said he will be back once the damage has been repaired. Hah!

I am still waiting for the plumber to return and instal a new sink for me.

Some days I feel like screaming "Shut up! I came here to die in peace!"

Not really. Only kidding.

As a Postscript, I very sadly learned that my longterm Blog and Facebook friend Ann, of Ancient One's Place, has passed away. I send sympathy and respect for her loss, to her family, and many friends.