This is supposedly the Season of Good Cheer.
Not much that I have seen, would seem to bear this out.

I have not been out and about in the shops very much, but the grim faces and crabby people would suggest it is anything but the Season of Cheer.

I am still struggling with darkness, and have not posted because of this.
My dratted knee seems to be slow to heal, and the pain factor is something else again. I was convinced it had become infected again, and spent the best part of a day at the Hospital waiting for blood test results, and xrays, and an Orthopeadic Surgeon to give a verdict on the red, burning, swollen and bruised looking knee. When he finally came to inspect the knee, he decided it is not infected, but suspects there has been bleeding into the tissue, which has caused all the problems. Result of Warfarin.

I refuse to take it any more, and will take my chances on other 'dire' consequences. Haha. Have yet to tell my GP of my decision, but if the knee improves and heals perhaps I will reconsider.. 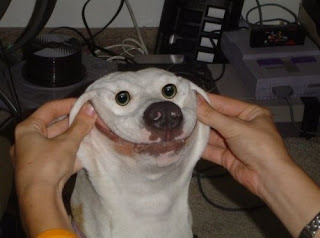 I suspect this is what a lot of peole should be doing!
Most of all, me! {Someone sent me this pic in an email, so I hope the photographer does not mind me using it here.}

A day at the Hospital is not for the fainthearted, and it is spent in an entirely different rhythm to life on the 'outside'.

I wisely took a book to read, having had experience with the ED when Gom had frequent visits. I never got the chance to read though, as I was seated outside the small 'office area' where an extremely motormouthed woman and her small child were waiting, along with other hapless victims. She was covered in tattoos, from head to toe,  and piercings, which she kept saying were not an indication of drug taking, which she kept assuring anyone who passed, she did not, would not, and will not ever take. I assume the weird hair and the caked makeup were not indicators either. She never shut up for the whole time- 2 1/2 hours!!- and we heard all about the rotten men in her life, the 4 children she now has, the fact that she is having another, and so on and so forth. All told in the most appalling grammar, and a grating loud voice. In the end I wanted to scream or leave, but could find no escape if I wanted a verdict on the dratted knee.

I did see several people I know, who came to say hello, and wish me well. Most of them staff who I have met either socially, or through my SIL, who works at the Hospital. He kept coming to check on me, and my son had delivered me, held my hand while I cried as the Dr took the blood, and returned later to collect me.

I do question the wisdom of having had the surgery so soon after Gom's passing. I seem to become very emotional, and can cry at the drop of a hat- to my horror. I am a coward, and my veins wont 'give' so having blood taken is a real ordeal.
Feeling unwell is a pain in the knee! 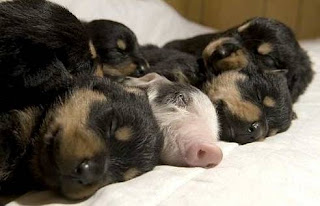 I just love this little pic, from the same email as Smile.

I wish everyone a pleasant and happy Season.
No music tonight, too tired.