I wonder how I missed September?

So long since I have been on here, I have forgotten everything I thought I once knew!

I seem to live a busy life, doing nothing. I know, that is impossible, but that seems to be what happens.
I spend a lot of time tripping about with my son, as he goes off to various clinics and appointments.
He is getting a new leg cast and should have it next week. The one he has now is very ungainly, and we are shocked at how primitive it all seems- it is the 21st Century for goodness sake.

His wonderful friends had a Benefit night for him, to raise funds to help him get a better leg. The System of public health is broke and broken, and even the technicians who make the legs agree, if there was more money, much better quality legs could be provided. One poor old man has broken his shoulder, because he cannot have a waterproof leg. He falls out of his shower. It is disgusting.

Son's friends came up from the City to share lunch with us, and present him with the cheque of a huge sum of $10,000+ raised by all his friends and well wishers. It was quite overwhelming for him, and an emotional time.

This pic below is of self, Son-in-law & daughter, then SG and Granddaughter. Son is peeping out over his sister's shoulder. He is sitting with some of his friends.


This pic is of Mrs N N & I. It was a beautiful day, and we sat out in the beer garden until it was time for lunch.

Here is Son, having his lunch. 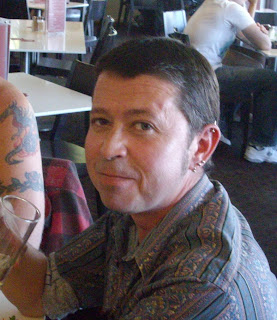 In other news, we have a new member of the family! He is a wonderful rescue dog, and he is definitely Son's dog. He is called Zane, and he has stolen everyone's hearts. He is supposedly a Corgi X Chihuahua, but who knows. All we know is, he is adorable, and follows Son about all day and sleeps on his bed. I go down to say hello, in the mornings, and Zane just lifts his head, then snuggles down into Son, as much as to say "You can go now, we are quite OK".

﻿Zane at his Master's Foot.

I had a kiln that I had used for my doll making, and I knew I could no longer lift heavy things, nor would I use it again. I decided to sell it. I listed it on a website and waited for months, with enquiries and scammers contacting from time to time.
I just had the feeling it would eventually go to the perfect owner.
And, Yes! it did. This beautiful lady came to see the kiln, and she bought it immediately. She told me she had lost out on several bids for kilns on eBay, and was so glad to find mine.
She makes the most beautiful glass beads, and she showed us some of her treasures. She had been to USA and had traded and bought beads, and lovely little glass trinkets.

She has a blog:  http://capricorndancer.wordpress.com
She also has an etsy shop ; http://www.etsy.com/shop/CapricornDancer

I fell in love with several of her beads and must go back to visit her shop.
I know the kiln has gone to the perfect home, and I am so happy.

I have had a foot problem, but I don't think there is anything to be done about it. A combination of arthritis and another problem, but I am very wary of any mention of surgery. They have decided they dont think it is malignant, so I can live with it.
No dancing the light fandango, but then, I never wanted to these days, anyway!

I can only wear flat shoes and have to be very careful of the fit. I don't mind though, as I once had and wore all the lovely shoes I wanted, and I am grateful, because some people never get that chance.

I must go and write some thankyou letters and reply to friends who wish to visit.
I am 'dog-sitting' Honey and Zane, as Son has taken SG off to the movies.