This seagull's persepective, might be quite different to what we see, when we look at him/her, with only one foot.
We tend to think, "Oh how tragic!"
But, perhaps the gull's perspective, would be, "Oh, How lucky I am to still be alive, and able to manage, with only one foot!" 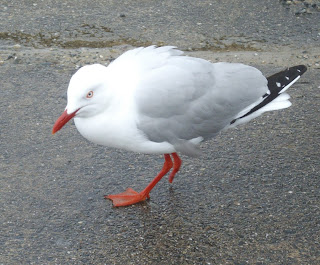 The bleak day notwithstanding, this gull made a good fist at fighting off other gulls, who might have competed for any scraps that could be forthcoming! 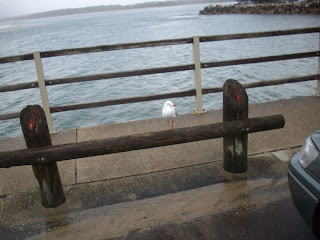 On our trip, we found some of these Sea Urchins, or Kina, as we called them in New Zealand. This is how they appear, when alive. They also appear to be very prickly, once they are 'deceased',  as they wash upon the shore. 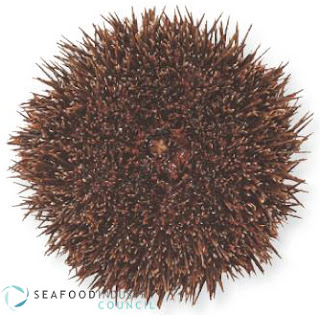 The action of the sea, sand, and the waves, gradually removes the spines from the wonderful delicate shells, that were once the home, and skeleton, for this creature.

We discovered many of these deceased creatures on one of the beaches we visited on our travels. My son decided he would like to keep some, as he loved the form and delicate structure of the now vacant homes. 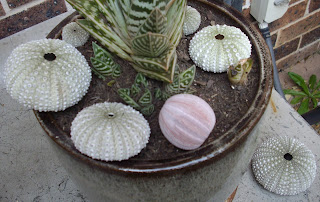 They are truly a work of Nature's  art, and the wonderful patterns are so lovely. 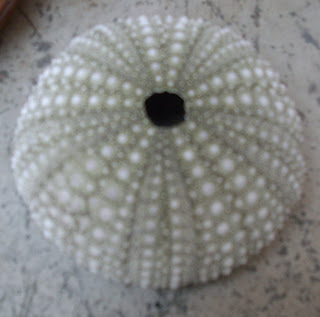 We collected these specimens, and though their former occupants were now deceased, some of them still had the remants of the former tennants, so to speak. Some still had the remnants of the spines, and so we were a little wary of collecting them.
Thence commenced the journey of getting the deceased creatures'  homes, to our home!
We enclosed them in a plastic bag, but soon realised this would not be enough to prevent the all-prevailing stench, of the remains of the prior tennants of these homes.﻿
So, on our first night accomodation after we collected the creatures, Son decided to stash them in a handy Skip, in the Hotel car park.
Next moring he retrieved the offensive package, and set off to purchase zip lock bags, in which to seal the creatures. Several layers of zip lock bags later, we set off for our next destination-all odour seemingly contained.
Thence followed a nightly routine, where son placed the package in the local accommodation's skip, or garbahe bin,  and then he retrieved it each morning, and added another layer of zip lock, and restashed it in our boot.
Imagine our horror, one morning, when we heard a leaf mulcher being vigourously applied to the current Motel's yard! Son sped off to retrieve the package, before the leaf/mulch/deposits were emptied into the skip!
As you can see, we did get them home safely, and Son spent some time cleaning them, and ensuring they are now odour-free.
****
A small story, for opinions, or persepective..
A small boy was deemed by his teacher, to be "Annoying".
The teacher told the child he was so annoying, he needed to go and 'annoy the door', in his class. This was in front of the other pupils, who had apparently also declared the small student to be 'annoying'.
The small boy duly went to the door, and 'annoyed the door' in a manner he thought appropriate.
However, the teacher decided he was not so much 'annoying' the door, as 'having a conversation,  with the door', so he told the small boy to "Go outside, and annoy the pole".
I found this story so sad, and so wrong on many levels.
Am I wrong in this evaluation?
Is it a matter of "perspective"?
I confess there was a certain admiration for the small boy for 'running with it'. On the other hand, what sort of message does it send to the small boy, and his peers within the classroom?
Opinions would be welcome.
Chris Isaak Two Hearts.
My first choice was 'I Wonder', but it did not play, and I could not find another version.

How strange to think that time can pass so slowly, yet at the same time, seem to flash past before the eye can blink.

Our trip was truncated, due to many reasons.

Sadly, I did not find myself able to relax and enjoy it all.
Much of the journey was tinged with sadness, as I recalled being in many of the locations with Gom.
We were rather impressed with much of the highway.
It has been extensively upgraded since I last travelled that way, with Gom. 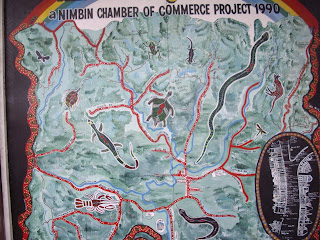 We visited the "Hippy Village" of Nimbin.
It is a very interesting place, with obviously great significance to the local Aboriginal peoples.
My personal views were, perhaps, not flattering to the influence of other,  later,  peoples. 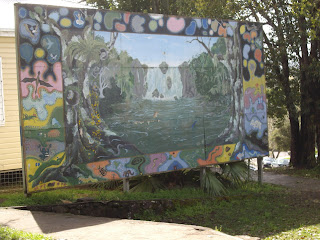 I felt it had a tired, sad, faded and jaded appearance, and time would not seem to have dealt kindly with much of the idyllic thoughts and plans from previous years.
It all seemed a little contrived now, to my eye. But who am I to judge, or even pass much comment.

We could only find 'Backpacker' accomodation in the area, and it was mostly of the rudimentary type.
As I said, I am too bl**dy old to be traipsing down some corridor, in my raggedy night attire,  in search of a toilet, in the middle of the night. Or even a shower, in the cold light of day.

We found a 'Bates Motel' some miles out of town. It was very isolated, and we were the only guests. Strange noises,  and leaking dripping taps,  did nothing to comfort us, and in the night it poured torrential rain with no letup. I kept telling myself the owners dog, Molly, looked very comforting, and well cared for, and thus reassured myself Molly's owner could not be a mass murderer, or even a ghoul!
It was ridiculously cheap, and having an ensuite was a highlight, in spite of the dripping waters. 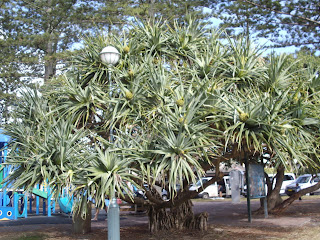 Byron Bay is ever an engaging destination, and the day we visited, it was almost sunny. We largely had wet, and somewhat cold, and miserable weather for much of our trip.
I must say, my son's driving skills leave nothing to be desired in the face of hideous wet roads, and almost monsoonal deluges. 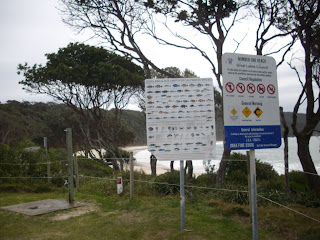 I was delighted to see this Bag Limit for fishing at a Beach we visited. How lovely to think there were enough fish to require limits.
Of course the down side was the thought that man has been so greedy, as to require 'bag limits'. I think this beach was Flynn's Beach and close to Port Macquarie.

We did spend some strange nights in some 'interesting' accomodation. Not all to be recommended, but most to be discussed and (later), laughed about. 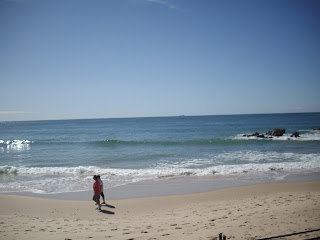 There were some sunny patches, and some beaches were sure to be delightful in the full heat and shine of Summer. 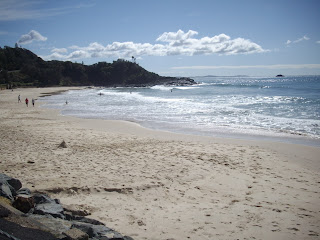 Hardy and enthusiastic surfers seemed to be out in most of the beaches we stopped off to visit. 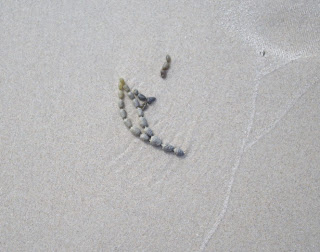 This beach we loved, spent some time walking up the sand, which seemed to be almost pristine, and recenly washed. I never fail to enjoy the salt wash line of the surf, and the little kelp seeds, on the sand. 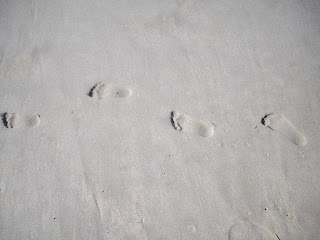 A small child had left these little footprints in the pristine sand. They somehow made me sad. 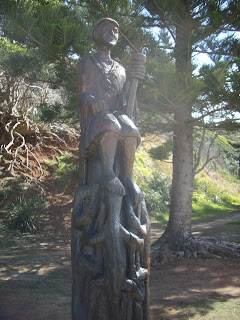 This is a carved statue of someone called Henry, who lived and loved on this beach. I have forgotten the name of the beach. 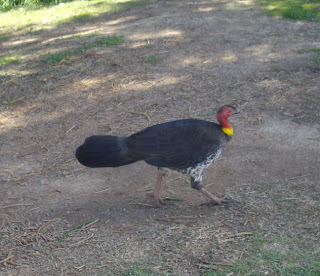 This is a Bush Turkey, which apparently Henry used to call his 'Chooks' and he fed them, when he was alive. It seemed he patrolled the beach, and kept it clean and tidy.


Upon my return home, I was greeted with a letter, advising me I had a re-call for my recent mammogram.
I was not worried, as I had had a biopsy and extensive investigation last year, for a minor condition.

When I attended the re-call Clinic, I  noticed a Jigsaw on the table in the waiting room. We were six women waiting for the tests, and the news, and some were more nervous than others.
I was struck how comforting women can be to each other, when a crisis demands.

We talked and laughed among ourselves and the Jigsaw remained untouched, but I kept remembering how Gom and I had loved to do Jigsaws together, when he could still see.

I was the second to be told all was well, and so I hope the other ladies all had positive outcomes, from the tests.
When I came home, I found a Jigsaw that Gom had never attempted, and I set about doing it by myself.

I found it engaging in a sort of numbing fashion, and I did enjoy the way it gobbled up my thoughts. A good friend came to visit and placed some pieces, and, inspired, went home to get a puzzle out to work on for herself. 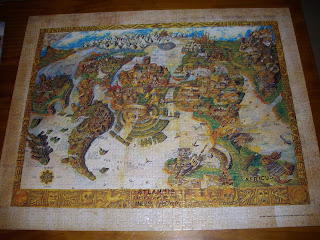 I did finish the puzzle and here is the proof!
I did a further simple, smaller jigsaw, but feel I might take a break, as they say.