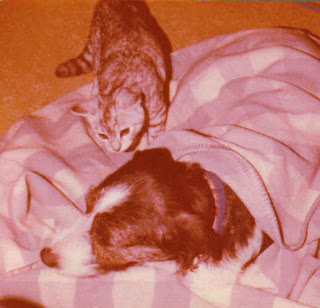 'Roast Pussy', checking Fern out, after her speying operation. 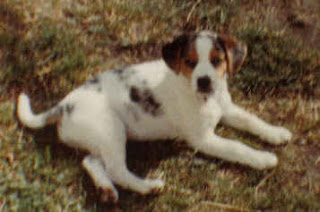 Aslan, who was a handsome, welladjusted, & wellbehaved cat. 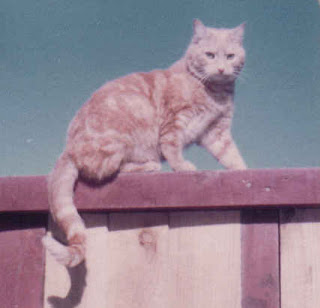 My daughter has a very soft heart. She has always had one, it seems.

When I used to take her to our small local Supermarket, shopping for groceries, when she was about 3, she used to love to 'help' with the shopping. And occasionally she would 'get lost' in another aisle. Her little voice could be heard calling "Mummy, I do love you!" The staff would smile. They had got to know her.

I dont remember her having tantrums- perhaps time has made me absent minded. I can still remember SB's tantrums! He once put his head through a glass door, in a rage. Luckily he didnt damage anything but the glass as it broke.

DJ was one to love her family above others. And she loved animals. We had a cat called Taffy, & he went missing for 3 days, & when he came home he was wounded beyond healing, & had to be put to sleep. DJ was very upset, as we all were.

When we moved into the inner city Hotel, we couldnt have pets. It wouldnt have been fair to keep them inside with no outdoor area at all for them.

But once we bought our Country Hotel, we had 2 dogs, & a kitten, which was a 'rescue' kitten. She had been badly abused by a little girl, & she was rather a vicious animal. She wouldnt allow cuddles of any sort. Even our dogs were very wary of her. Her name was Missy, but we couldnt seem to train her to stop piddling indoors. And we started calling her Roast Pussy. As I kept threatening her, that if she didnt behave, I would roast her in the coal range!
We eventually had to accept she would never be 'sane'. The vet recommended she be put to sleep. So we reluctantly had her put down, & we quickly got a replacement, who was a lovely natured cat, the kids called Aslan. They were reading the Lion the Witch & the Wardrobe at the time.
Of course when we came over here to live, we found new homes for our cat, & the dogs. Though we wanted to keep Katie, & did intend bringing her over, after we bought a house, but our friend who had 'adopted' her in the meantime, didnt want to part with her, so we let her stay.
DJ, with her soft heart, would walk home with dogs tagging along.
"They just followed me home, Mum"
They got returned to the point they had started following!
Then she came home with a kitten. 'Perhaps you can keep him.' we said. So she took him for a walk, & some boys scared him, & he shot off & she never found him.
Various animals & people would come to our place, often 'lost' in some way.
One Friday night DJ brought a boy home. He had been sleeping in the railway stations.
"Come home with me," she said, "My Mum will give you a bed."
And so I did.
And we had Brett for almost a fortnight before he returned to his 'foster home'. He was a nice boy, & we offered to keep him, if he would'nt return to his latest foster home. (But we didnt tell him, just told his 'case worker', who came out to visit us, & told us the story of Brett's life.
He was 14 when DJ met him. He had lived in 15 different homes. He had lived with his mother briefly. His father briefly. He had been with grandparents, with defacto grandparents. It didnt seem possible the number of relationships the poor boy had tried to form, only to have them ripped apart- I wondered how he had survived.
His mother would come in & out of his life, promising him everything- then she would vanish, & just leave him bereft again, with lies & broken promises for memories. But he told me he loved his mother best of all, & was happiest when he was with her. He had suffered some physical abuse from his father- he put a razor blade through the boy's nose, to 'teach him not to smoke'. I cried over some of the stories he told me, but never in front of him.
We met his foster parents- they seemed rather an odd couple to us. The 'mother' told me she was an 'undemonstrative person', who 'cant give physical affection'. She had a 3 year old daughter of her own. We couldnt imagine why they had wanted a foster child. She couldnt hug Brett, which I found really sad. He loved a nice warm cuddle.
Eventually he went 'home' with them. But he regularly came to stay with us. He would turn up at my shop, asking 'Can I stay the night/weekend, at your place?". We always made him welcome. 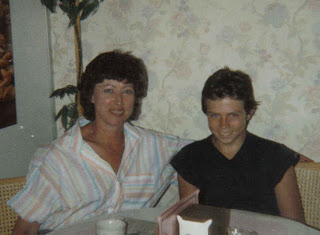 Brett with Meggie at the Shop.

Even after we moved into another Hotel to live, he still came to visit us now & then. I often think of him, & wonder how his life went, & where he is today. I would love to think he had his own family now, & is settled. His case worker explained to us, that children like Brett, get to be nomads, of sorts, & they find it increasingly difficult to settle down, or make lasting relationships.
Which is not surprising, if we think of how many times he had been let down, so badly.
DJ still has a soft heart, & works with people who really need her soft heart. I think she has finally found her vocation in life. She has her own children, & a dog, who is loved dearly.

Hi Meggie - another lovely story today - with a touch of sadness for Brett - we can only hope he grew up to be happy & has a lovely family of his own - but I don't like the odds - bit like your cat Roast who was mistreated & never seemed to get over it. Loved the clouds also - there are often wonderful shapes in them -animals & babies seem to dominate in my sightings.

Meggie, A truly sad story about Brett. My heart breaks for kids like him. Maybe the little bit of stability you offered him helped him to see what could be possible.

Hi Meggie Thank you for sharing this sad story on Brett's life I truly hope he is leading a good family life and 1 day may pop in and see you again. Take care Big ((HUGS))

You certainly did a good turn to Brett. We temorarily housed lots of lost types, not through fostering, but through my husband dragging them home. I like to think it helps even if it's only temporary.

I'm with Joyce: whatever happened to Brett, he at least had a few extra happy memories because of your family's warmth and welcome.

Karma is a wheel, and your kindness and open-heartedness will come back to you threefold, I have no doubts.

Aslan, in that picture, REALLY LOOKS like an Aslan, doesn't he?

Poor boy. He was lucky you chanced into his life. I'm sure your kindness made a lasting impression. Such a nice looking boy too.Shame on people who bring children into the world and then don't take care of them.

What a touching story, but it sounds like you have a soft heart, too. The apple doesn't fall far from the tree - your daughter had a good teacher. And, I too, hope that Brett is living a good life.

Hey, I love the new look of your BLOG, I had to leave and come back because I didn't think it was yours.

The story of Brett seems to touch other people as much as it touched us.
He was an honest boy, which was something good, seeing he had had such a terrible time in his life.

Thankyou for the kind words about my new-look blog too, I am very happy with it. Looks a bit more modern, & clean.

Meggie I am sure your comments are true you never know perhaps He would have had a family and settled down to a life of happiness.......we will all live in hope that it is true.