"May the LORD watch between you and me when we are absent one from the other." 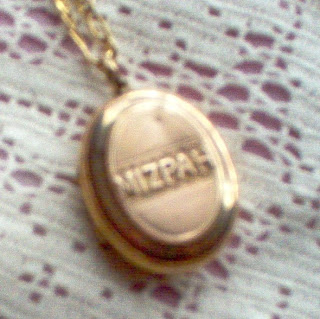 This is a family heirloom locket, which has been handed on down to me. The word "Mizpah" was a fashionable thing in the era when my Great Great Grandmother, gave this locket to my Great Grandfather, who was her first born son. 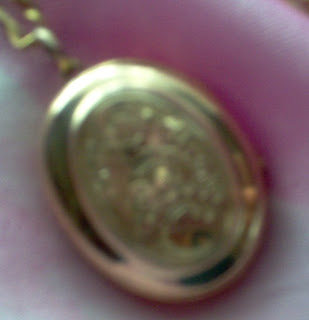 This blurry pic- sorry about the quality, I couldnt get clear pics- shows the beautiful engraving on the other side of the locket. 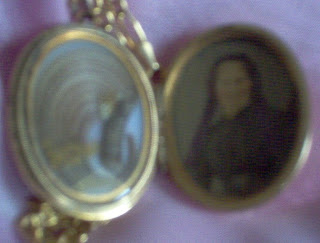 And this even blurrier image is of the open locket, with a photo of the old lady, with a lock of her hair on the other side, which had been carefully curled around a fine gold wire, on which there were seed pearls threaded, through the lock of hair.

My Grandmother was given the locket by her father, & she gave it to my mother. Apparently it was fashionable in the time when the locket was made, for mothers to give their sons such items of jewellry. My Grandmother told us that her father was somewhat disgusted, & never wore it himself.


Which seems a little sad to think about, now that I am a mother myself, & know how precious my children are to me.

And this is the story of a 'heinous crime'. (Though it was never referred to in quite that manner!)

When I was little, I 'got my hands on' the locket. Apparently I broke the catch & so my mother had to take the locket to a jeweller for repair.

My mother swore they had opened the piece which contained the hair, she thought to see how it was done, & when she got the locket back, the gold wire had been broken,& the seed pearls had all fallen off the wire.

I was always told the story of what had happened to the locket, & my mother was always so accusatory, about this.

It made me miserable every time she told someone the story. It made me feel so guilty for years.

I cringed & curled to think I had been guilty of such destruction of a beautiful item. And cringed even more, because it had meant to so much, to the mother who had given it. I was sure she would have hated me!

I dont feel guilt about it now, but it has made me miserable for years.

Whenever one of my children 'got their hands on' something & damaged it, or broke it, I always blamed myself for being careless enough to leave it where they could gain access to it. And I always made sure they never felt guilty about it too!

I know my mother didn't realise how badly she made me feel. And I suppose there was a part of her, that felt so bad, & so guilty for allowing that to happen, that she wanted to 'blame' someone else, so she wouldnt have to feel so bad.

I remember I finally flared up at my mother when I heard her telling one of my nieces about the locket. And she was genuinely startled at my fierce reaction.

I have never worn the locket, but I often look at it, & wonder about my Great great Grandmother. I wonder about DNA as I look at the grey hair, so carefully coiled in the little window.

I wonder if she mourned the fact that her son took his family, & emigrated to New Zealand. I suppose she did. She never saw him again.

Isn't it odd how families can be like that? My mother had the same thing in her family -- her father's family didn't like her mother, therefore, they were never treated as well as the other grandchildren. That just seems so odd to me! I'm glad you no longer feel guilty about the necklace -- I agree with you, when my children broke something I blamed myself.

The story attached to the locket makes it so much more interesting and appealing. Make sure that you write it down and put it with the locket (leaving out the part about the damage).

My MIL has often hurt my eldest with thoughtless comments - older people can really hurt the younger generations if they say things thoughtlessly - especially as the youngsters look up to them so. Mind you there's always instances of things said deliberately in spite too. Yes please on the thick vegetable soup Meggie - the weather here has turned distinctly cold on top of all the ghastly rain we've had - Typical! Glastonbury this weekend and now Wimbledon - always rains!!! you'd think it was February!

That was an interesting story.
It made me think how I have been made implicitly responsible for every aspect of my brother's ill fortune, because he ran into a tree when chasing me and got concussed.
I wish I had a treasure like that locket, you have saved some intriguing mementos.

Love the sentiment at the beginning--esp as my dear sister has gone home. Sorry you were made to feel so bad for just being a curious child. Maybe psychology has made us more sensitive to the effects on others of what we say? Or maybe some people stomp on others feelings without a care....

It's a fact of life that kids and jewellery do not mix. My own daughter left a watch of mine in the garden when she was about six and it was never seen again, but luckily it wasn't valuable. I myself saw a piece of curved copper wire on the kitchen table and happily uncurled it - it was my Mum's gold sleeper earring!

Too bad you were made to carry the guilt of that for so long. Still it adds to the story of the locket I suppose. My mother in law always blamed someone else when anything was broken , it was never her. She had a some amazing stories about how her things were damaged, because others were jealous of her... silly woman..
She's gone now, and it's sad this is the main thing I recall about her.
xo

Hi Meggie,
I too have a MIZPAH. Mine is a ring and the word MIZPAH is in different coloured gold. It was given to my GG-Grandmother as 'sort of' engagement ring when my GG-Grandfather went on a voyage.
I must get it out and wear it. I was only thinking about it a couple of days ago. I have never seen a locket with MIZPAH on. I'm sure it is very rare.

Good for you for standing up for yourself regarding the locket. Little kids usually don't mean any harm, they just get into mischief now and then. That's how you know they're healthy!

The locket is beautiful and quite the heirloom, seed pearls or not. The stories make it even more interesting.

Your locket is lovely.

My sister and I were discussing the hair picture and she reminded me that sometimes locks of hair were put in the family Bible along with pressed flowers from funerals, etc.