There are times when I wish I had a panoramic camera, so I could capture the complete panoramic views we are often afforded here, in our hillside house.

I also, often wish I had a tape to switch on, for the little gems I hear, when out & about.

The following photos will document the storm we watched develop, build, then erupt, with the aftermath of relative serenity that followed.

So begins the build-up. Deceptive blues, light clouds... a lot like life, really. 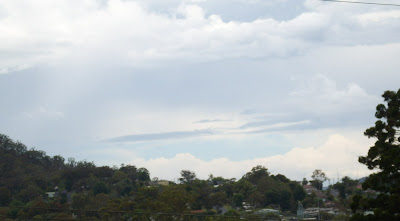 Nothing is ever as it seems, is it? 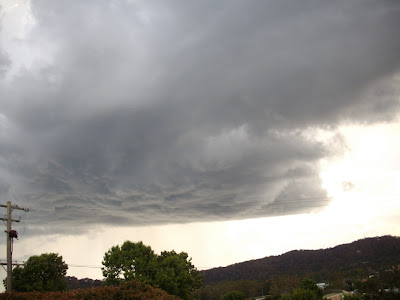 The huge cloud banks, slightly to the left of the clear blue 'gap'. 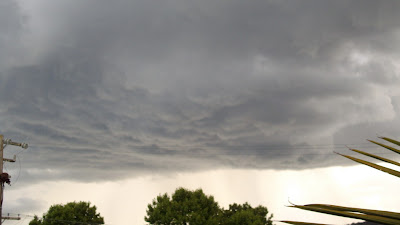 Could that be rain clouds forming? So billowy? 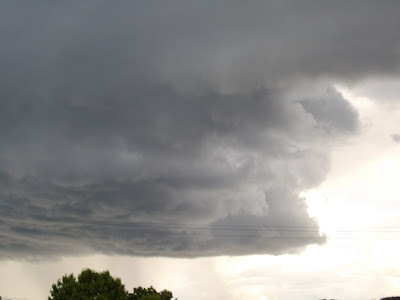 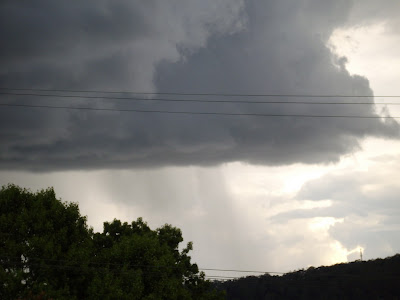 Look West. What a change of face! 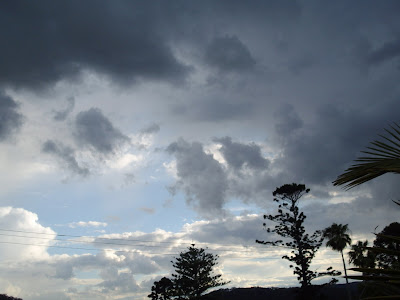 My goodness! All is forgiven! The face of forgivness? 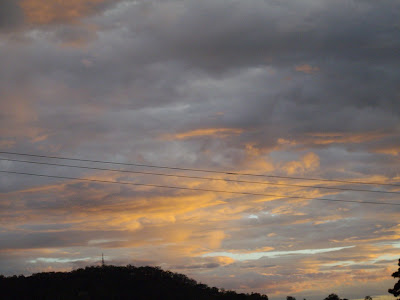 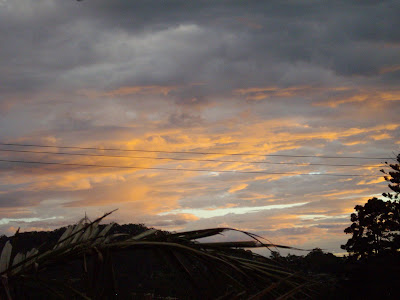 Life is more likely about windows of opportunity.
Windows for the future, which may, or may not, be so immediate. 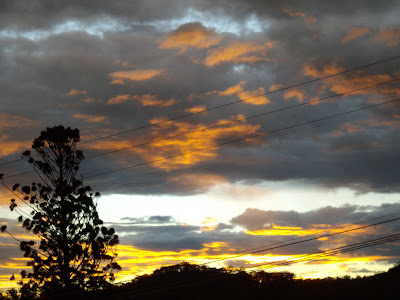 Look to the gold? Look, for the gaps, the windows...

Don't trust it all too literally. Deception abounds. 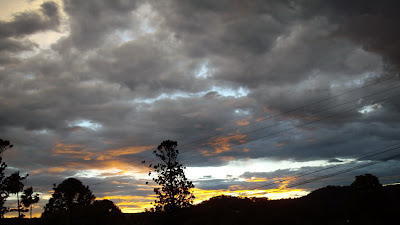 Those flashes of gold. Not stable.
Offering promises for the morrow. When blue skies & fresh air, with sunshine, will be the order of the day. 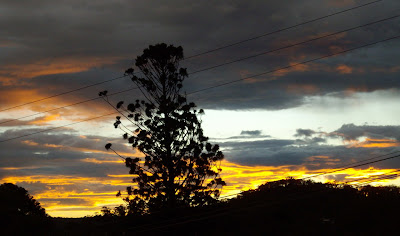 These wide vistas of the cloudscapes colour my days & evenings.

I see many paralells to life, in these clouds. I think too much!

Sitting in the hairdresser's waiting chair.

"After I finish cutting this young man's hair, you are next!"
"Thankyou, I will wait."

As I sit, enthralled to hear the tale drawn out, from the client. Conversation, as the haircut proceeds.

"I am a Housepainter"

"Do you do delicate work?"

"No. I have a young girl I employ. She is patient, very neat, careful. She has a baby. She had back pains, a sore back. She went to see her Doctor, who told her she was having a baby!"

"Did she know she was pregnant? Did you know?"

"NO! She is a chubby girl- you know, quite big, so you couldn't see it. She said she had no idea. She was shocked. She had it 2 weeks later!"

"She didn't KNOW?? How can this be? Did you believe her?"

"Well yes, but I dont know whether to believe her or not!"

I can no longer sit quietly. I have to pipe up.


"I beieve her. It is entirely possible"

The men stare at me, in disbelief.

"It is entirely possible."

I explain to them both, that if the girl is plump, she may not menstruate regularly. Or even at all. I explain that is it entirely possible the girl had no knowledge of her pregnancy.

I am struck at how little men seem to know about women, & their bodily functions.

When recounting the story to a male friend later, he told me "Men don't want to know!" I believe him. Even in this day & age, I believe him.

Further discussion ensues about the fathering of said child. Another, promiscuous, man, Bob, is employed by the House painter. Bob has impregnated 2 other women, neither of them his wife.

The Housepainter asks the girl if 'Bob' is the father of her child?

She laughs in his face, & informs him it is "Some bloke up in North Queensland."

I ponder this after hearing further details of her living arrangements & her studio/house sharing partner. Who is her father.

She had kept the baby.

It never gets boring, going to the hairdresser.

Now I have found one I like, I can relax, & just enjoy the entertainment!


Paul Simon, You Can Call Me Al.

One of the mums at school didn't know she was pregnant. She literally went to the loo, and gave birth :-O We were all in total shock about the situation. It wasn't like she'd never been pregnant before - this was her third child. So yes - it CAN happen. x

Wow. You get quite a story when you visit your hairdresser!

oooh, what juicy tales are told at your hairdressers!

Meggie, in relation to GOM's need for an urgent specialist appt - speak to your GP about the wait. GPs are their patients' advocates, and sometimes we are required to intervene on our patient's behalf. We can sometimes 'wangle' an earlier appt. (I am not afraid to beg if necessary ;-) )

Hmmm....maybe I should start going to the hairdresser instead of cutting my own hear. It sounds like a hoot!

I envy you that splendid storm as we need rain ASAP.

And Jellyhead is right. SWMBO said the same thing: have your doctor intervene with the specialist and emphasize the urgency.

Meggie - just love those photos!! I love a good storm, the highlight of my Christmas this year will be going to brisbane to catch up with the in-laws and have a few of those thunder and lightning storms.

I'm trying to find a new hairdresser actually, mine has hung up her scissors to manage the salon instead...shame reeally cos she had a couple of "swingers" who used to frequent the place and I'll miss those stories.

Ah yes, you get the best dirt at the hairdressers. Beautiful photos Meggie!

Such nice photos. I don't know that I've ever seen that gold streak in our sky.. but I will pay more attention to see.

My hairdresser is a Christian married to the Pastor of a church. I've never heard her say a word about any one. She tells us about what they did at church and talks about her grandchildren.

My husband is the one who comes home with the dirt.. he gets it from the barber shop..LOL

Beautiful pictures of clouds, I loved them! It's very possible to still have, er, your monthlies and be pregnant. I know of two people that it's happened to and they were quite far along before they realized that they were pregnant. In fact one kept getting tested and they were telling her it was merely psychological! Very weird.

Beautiful photo's Meggie, I love the rain drops on the plants, totally magical.

I like finding parallels to our lives in natural phenomena too - your pictures do it wonderfully well!

Wonderful wonderful photos Meggie, I loved this post! So good to read of life's parallels
Kimx

Those photos are gorgeous. The sky looks amazing, I love the way they fl=ollow a storyline of their own.

Gosh every colour of the rainbow - I mean cloud.

I knew someone who went into labour pushing a car, and that was the first she knew of being pregnant, and she was a bright girl, not overweight, very worldly. Still strikes me as weird though, and I'm a woman.

Nothing like a good storm at the beach, in my comfy and warm camper.

Thanks for the summer storm and for the green and blooming garden shots! It's getting several shades of brown here and this is just the begining, so those shots are a real treat for the eye:)
Back in Nebraska, so legend has it..a farmer and an old maid married late in life had no idea they were expecting, and when she delivered he was in town so she called a neighbor who delivered the baby. When they hunted down the farmer to give him the news..he said very definately.."We can't have a baby! We have no baby clothes!"
I don't suppose that poor girl had any baby clothes either..

Beautiful pictures!!! Incredible clouds.
How come I never get such entertainment at the hairdresser????

Nature and life are always interesting and changing.
People are somewhat amazing. I love hearing the stories.
Your clouds and sunset are lovely.
Thanks,
Sherry

I'm getting downright rude. I zipped by a couple of days ago, enjoyed your post, then zipped away again.

Good for you for enlightening the men about female bodily functions. I'm grateful to have a husband who is matter-of-fact about such things.

You do come up with the best stories!

I always love the little conversations you portrait. My niece had the same. She was told she couldn't get any kids She wasn't overweight but just never menstruated. Than suddenly she wa told you get a baby in a month.
That was quite a shock She got another child after that

Thanks for your comment on DG Meggie. I seem to have gone off blogging for some reason, probably taken on a bit too much. I am just a little bit longer in the tooth than you! But I have enjoyed catching up with your blog. I love your sky photos with the gold and have enjoyed all your posts. Maybe you were the inspiration I needed to get back to blogging?