Batman, and other Impersonations.

Yesterday, Gom took it upon himself to impersonate Batman.

Either that, or he was returning to childhood, with the belief that he could fly.

In fact, he 'flew' head first down our stairs.

To land, spread-eagled,  face down, at the bottom.

On the cold, hard, ceramic tiles, of our entryway, inside the front door.

I had been begging him not to attempt vacuuming our floors. We had been out, and had locked Leo, our dog,  outdoors, to avoid him beating up his 'sister', Honey, our other dog. Honey is smaller and older and not aggressive. When Leo gets overexcited, he is apt to attack Honey, lest she get more attention than he.

It rained hard, and long yesterday morning, with the result that Leo had panicked *slightly*- read, massively,- and came indoors covered to his ears in black mud, where he had tried to dig his way out of the garden, to escape the rain.

He was a sodden, muddy mess. Carpets were muddied, as was our clothing, when he greeted us with such relief, at our homecoming and opening of the door to 'inside haven'.

I proceeded to bath his sorry hide, curly coat,  and tried my best to dry him off, but he is a stubborn dog, and hair dryers are not his favourite items in life. Nor are clippers, scissors, or toenail trimmers.
He was having none of that, though fluffy curls did land on the floor, and attempts were made to tidy his woolly coat.

Gom decided, since he is somewhat inadequate at the bathing process, he needed to vacuum. I told him to leave it, I would deal with it all later.

Have you ever tried to 'tell' a Leo or a Gom, anything. It is like shouting at thunder. Totally ineffective.

I went out to the kitchen to have my lunch. I had heard the vacuum in the bedrooms.
I had seen the exhausted Gom, resting. I felt it safe to lunch in peace.

As I rinsed my lunch plate, I heard sickening thumps and thuds.
My stomach turned a full somersault. I felt like my chest would burst.

I rushed out, to see the spreadeagled figure of Gom lying on the tiles. At the foot of the stairs.
My first thought was that he was dead.
My second was that he must have broken something.
I raced down the stairs, amidst cords and bits of vacuum cleaner.
His legs moved.
He raised his head.
Blood poured forth.
Leo rushed in to lick the blood.

Truly, the stuff of nightmares!!

Gom spoke to me. Telling me he was ok,  but looking like a monster from hell. Blood streaming down his nose, his glasses ruined, on the floor.
His forehead bleeding where contact with the tiles had occured.
His nose hideously bruised, but, incredibly,  unbroken!

Incredibly, he has no broken bones. No seemingly lasting effects from his 'flight of fancy'.

After the initial horror of it all, we have tried to laugh. I can't begin to tell of the horror I felt when I first saw him. I must have a strong heart, because I did not have a heart attack. Or a stroke. Or faint.

We have tried to make jokes about it all. Very hard, in light of how I felt, when I saw the 'body' at the foot of the stairs.

But OMG did my body shake in terror!

I rang our daughter, for some support, in spite of rantings to the effect I was not to 'tell' anyone.


I truly hate this disease, that has robbed me of the husband I had.

I hate the changes to his personality, that are part of it all.
I know there are worse diseases. I should be grateful he does not have dementia, or Alzheimers like his mother.
But there are parts of this disease that manifest in similar manner. The sudden rages, over nothing.
The hideous stubbornness.  The irrational outbursts.
I struggle to keep a mind, and a sense of reason.

Morty provides some much needed relief. I love his little body, his sleek fur, & his ready purr. 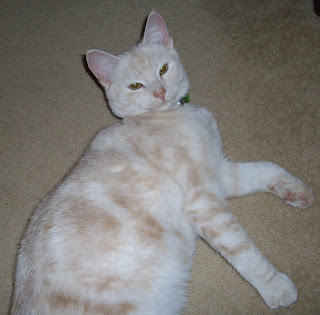 I also love his disdain, and refusal to acknowledge current worries.!

Morty continues to keep me somewhat sane.
Today our Daughter came to visit her wounded father.
What an odd man he can be.
He craves the visits, yet acts distant.
Another mainfiestation of his 'condition'.

Oh Meggie what a day you had! My thoughts are with you and I'm so glad you have little Morty to keep you sane! Cats are wonderful creatures aren't thy?!

Goodness me! It's terrifying to read about it, I can't begin to imagine how terrifying it was for both of you.

Oh Meggie, I can't even begin to imagine how you must have felt. Still feel. Thank heavens he is ok, if a little dented. I know what you mean about losing the person they used to be once - it is so hard, and incredibly sad at times. Hugs from England for you.

Dear Meggie, how awful for you both. All the little things, and the big ones too, that happen, bit by bit, or suddenly, the dramas, the wondering what will happen next, and whether you can cope. It is no joke at all. Mourning the loss of the man you had is so sad - and it is something I do, too.
I am so glad you have your lovely cat. Morty looks so beautiful.

My heart was in my mouth just reading about GOM's fall. Could have been a lot worse but sounds bad enough as it is - hope you are both okay now.

I can only imagine how horrifying that must have been. Getting older is even less fun than I thought it would be. I am impressed that you can look on the bright side and see that it could have been worse. Hang in there.

Oh, ouch! That had to be a terribly frightening experience for both of you. Thank goodness, GOM was not hurt more than he was. But I bet he'll be aching today.

Just a bit of blood and broken glasses? Amazing. And horrifying.

It seems to trite to say that you can only take one day at a time. And it is just as trite to count and hug your blessings. But both are true nontheless.

Oh my heart was in my mouth too meggie.

Hugs to you and many fortifying cups of tea. I don't know if our husbands share the same disease but my word it can be trying (more than that but I will respect your blog space by not cursing here!!)

OMG Meggie, how awful for both of you.
I was hoping as I read it that the end result wouldn't be too bad, (since you began with references to Batman, I thought things must be okay.)
Men have to be their own worst enemies. I hope this taught him a lesson.
hugs
xx

Oh Meggie, what an awful situation for you! I think it must be the age, compounded by the stubborn nature of men. My father in law had a very similar accident two weeks ago, and never told any of us. He's spent two weeks sleeping in his recliner chair because bed was too painful on his back, and is finally thinking about seeing a doctor, because he "thought he'd be better by now". I had a little rant to hubby last night about how much damage he could have caused by not seeking treatment before.

Men can be maddening, even when they don't have a medical excuse! My thoughts are with you, Meggie.

Meggie, you are just amazing!
GOM's illness and his flying down the stairs is more than most could cope with. And yet....you write about it with such witty words and such heart.
I am so glad you have Morty.

Hugs for you Meg. I don't know what to say!

What a fright that must have been! I can't imagine how terrifying it must have been for that few seconds.
Beautiful pictures of Morty. He looks like a wonderful companion kitty.

Oh goodness Meggie, what next! I hope Gom is none the worse for his adventure, and I hope you are too. Make sure you look after yourself. Just as well you have Morty to help make you feel sane.

OH Meggie- I hope you have stopped to take a relaxed breath- What a fright you must have had...
Pets can be so much fun but they do get themselves into scrapes.
Glad that your daughter was able to come and visit-
I will keep my eye out for something to make you laugh and send it on to you- Something funny always makes me feel better.
Hugs,
Anna

Gosh Meggie -- I'm so sorry to hear about GOM and his accident. I hope he's not too bruised. I've missed you while I've been gone -- how fun to catch up with the your posts. I'm so excited to see that you have a new kitty -- good for you!!!

My goodness. You had me laughing and then in shock, all within the first paragraph. I'm so glad the GOM came out of the situation in one piece, but what a horrid shock for you!

I think illnesses which affect the person's personality must be some of the hardest to bear up under. So hard, sometimes, to tell what is real and what is "merely" a manifestation of the condition.

Glad you've got Morty to keep you from going mad. I can imagine your horror at seeing GOM lying at the foot of the stairs. And I can empathize with your sorrow over losing the "old" GOM to his illness. Glad, too, that you have this place to spill out the hard times. You have plenty of people pulling for you.

Blimey! So glad to hear that the only injury was a blood nose, it could have been so much worse.

Oh, Meggie, thinking of you!

Wow, I can imagine how scared you were. So sorry that Gom fell down the stairs, but so glad he wasn't hurt more than he was. I'm glad your daughter lives close and could come. You needed her support. Our daughters can be such a blessing to us. And since mine is a nurse her father appreciates her talking with him when he's worried about something going on with him... Meggie, take care of yourself whenever you can find a few minutes for you...We will uphold you in prayer to help you stay strong. Just know that all of us who read your blog love you and GOM. (((hugs)))

Oh dear! Am glad you're all ok. What a nightmare, we have stairs at our place and I know I wouldn't cope well with seeing The Stud lying at the bottom of them in those circumstances.
That Morty is so cute, I just love ginger cats.

Oh dear. I do hope your GOM will heal quickly. Keep a close watch on him the next few days. So glad that you are enjoying Morty. I love seeing him on your blog sidebar!

Dear Lady - i am so very sorry to hear of this accident, and your fear - what must you be dealing with almost every moment?

(I have been out of town and late with my blog-checking. )