Amidst the tides and swirls of grief, I try to take time to see the rainbows.
This one came across the Valley, where we live on the hill. 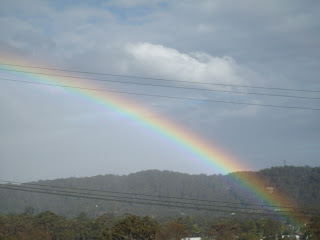 It really was spectacularly bright and glowing. I wondered about the preponderance of rainbows we have had lately, across the Valley.
We saw a bight one the day after Gom passed away, after the thunderstorms, which had raged for the whole weekend while he was dying. I told my children, perhaps it was Gom, trying to tell us not to be sad.

We have had one of the wettest Julys ever, with the wettest day in 23 years. We have also had the coldest July day, for 8 years.
My heart has been frozen for many of these days, and some days it is an effort to just get out of bed. 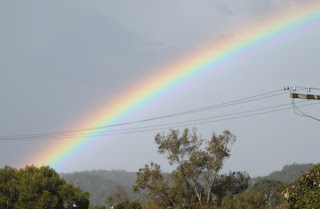 I have discovered grief has Tides. Some are Seventh Wave tides, and some are just too overwhelming to name. They sweep over me when I least expect them, and there is no predicting how each day will be, or where the tide level will take me.
My Nice Neighbour, who has also lost her husband has taken me to the beach, on a glorious sunny day. We walked up part of the Skillion which is above the sea, at the end of the beach.
I saw a fisherman catch a fish, on the rocks far below, and I could tell, it was too small to keep. He looked up as if the say. "I will not keep this one." and he released it back into the water. I felt strangely comforted at the sight.


Mrs N N and I went out for lunch today together, and we consoled each other and laughed together about some of things we feel and notice.
There are bizarre things that strike the mind, when least expected.
The Undertakers, who came to take Gom, wore the most ridiculous striped trousers, with odd waistcoats.
We decided they looked like the Circus Band Members, and half expected them to bring out their trombones!
We asked each other why they would dress in such strange clothes. We finally decided it was to give family something to laugh about, at a time when everything was too ghastly to be fully realised, and stunned numbness was the predominant feeling.
My health checks have been completed, and it seems my heart is fine... well,  physically, so I am told, and I have the pictures to prove it.
There are ridiculous things happen, such as, after cancelling Gom's credit card, and having to watch it being cut up ~ which was very confronting, somehow~ I get two letters in the mail 2 weeks later, with  new Credit Cards, one for each of us, in shiny mint condition. I just cut those up myself.
Perhaps once all the Legals are tidied up, and sorted out, I might take a trip to my homeland, to stay with family.

I am making no plans or decisions.

Hi Meggie
I can't tell you how pleased I was to see that you are blogging again.
There's nothing I can say to explain how I felt about the last blog, suffice to say that I was so upset, and me over the other side of the world. That's how effective blogs are......
Anyway, so pleased you are okay.
My sister-in-law had exactly the same problem with credit cards etc.
Keep well Meggie and know that someone over the pond is always thinking of you and wishing you lots of love and happiness.
Hugs
Briony
x

I have been thinking of you and was glad to see you had posted. Am also so glad you have your nice neighbour to share with.

That's exactly right Meggie - one day at a time.

Mary said...
This comment has been removed by the author.
9:46 pm

I send you spiritual and emotional floaties. Hang on to whatever you can. Things like rainbows do give comfort.

Welcome back, Meggie, and at least you know how sad we all are for you.

Just yesterday as I was sewing my thoughts were of you and I was wondering in my mind how you are doing. Having never experienced this kind of loss, I can not imagine what you are going through. I send you thoughts over the miles and wish you many better days to come, days that will bring comfort, and joy, and peace, in the midst of your great and painful loss. Hugs too.

I wish I could be there to give you a shoulder, an ear and a hug. Glad you are blogging again. I hope that is helpful too.

So good to find you blogging this morning. I'm so glad you have N N. I have read that no important decisions should be made until at least a year after the death of a spouse. I'm so glad for the good news of your health issues. I loved the rainbow pictures. They are a reminder of GOD's promise. ~ann XXOO

Lovely to see you blogging again Meggie. Glad to know you have a nice neighbour who knows what you are going through and that you can help each other through this horrible time. So very pleased to know that your heart is still in one piece even though it feels broken at least that will be one worry you can tick off the list! I am so glad that you are beginning to feel able to see the funny side of things even if it is something as bizarre as the outfits of the undertakers - take your "fun" wherever you can find it. Take care of yourself and make no major life-changing decisions during the next few months as I gather it is best to leave such things for a while. However a trip to visit your family would surely be a good thing. I seem to have waffled on - sorry but please know that you continue to be in my thoughts and prayers.

Meggie,-I am so glad,-as everyone else is,-that you are blogging again. I think of you daily, and believe it or not, I try to think like you, and be more at peace with things. Please know that every day will be different and hard,(I watched my mom go thru this with my father, and it's devastating in ways no one can imagine,) and she is now going thru it a second time,.....just know you are in my heart and thoughts, and I wish I could do more to help you, and be there for you.Keep writing/blogging, it helps. The only other thing I can say is 'thank you' for sharing yourself with us, you help me in ways you will never know.

Now Meggie you should have taken that nice new credit card and charged a luxurious, long vacation on it. Then when they came to collect, you could say "Oh, I know nothing about that. I canceled that account a long time ago!"

Was thinking ooutou yesterday...sending you warm thoughts, and hoping you find another rainbow soon.

Lots of lovely rainbows, aren't they just so beautiful? There is always something hopeful about a rainbow; it means the storm has gone away and calm weather is ahead. Perhaps that is a metaphor for some of your life. Good to hear you and your Nice Neighbour have each other. And good to hear about your chuckle with the clothes!

*sending hugs that enfold you in love---I'm so glad to hear that your heart is PHYSICALLY okay. I wish I were nearer to you ... Hugs and love to you and Honey.

I loved the story about the undertaker's clothes- GOM would have found the humor in his clothes too I am sure.
I think its a beautiful post you've written.
We have had some terrific storms here this summer and our poor dog Dusty is terrified of the things. She does not know what to make of them and runs to hide at the first opportunity. Sometimes she tries to hide herself under our pillows even when our heads are on them.
Sending you a big cyber hug, dear friend,
Regards,
Anna

Thank goodness time passes... it takes with it some of the awfulness with each day that goes by. I am so glad to find you posting again. Like angelsroy, your free treats have often lifted me out of myself. As long as you can still see the humor in things (our undertakers dress similarly!), feel gratefulness when things do go right (rainbows and returned fish), and have someone to share your heartaches and joys with (NN), you'll be okay. Hope your okay days increase with time.

"One day at a time" seems wise.

It's so good to see a post from you.

Oh Meggie i so feel for you my dear - it is the hardest seat to sit in - you so need a hug, but the person who could give that hug, well their absence is the reason for the need for the hug. It will get better but it will take time - everyone is different and for each the time scale is different but be warned even when it does seem to be easing the strangest things will come to remind you again - i'm sending many many hugs and good wishes from the other side of the world and I hope that soon the numbness will fade and the remembering will become less painful (((hugs)))

I've been thinking of you Meggie. It does seem so ridiculous, the amount of bureaucracy our society makes a grieving family go through. But how nice that he sent you a rainbow xx

I think of you so often, dear, and say a little prayer for you. As I am watching my friend Patti and wishing there was more I could do for her, I think about you. Some days she seems to have it all together, and some days I can tell she is not ready for Paul to go. Today is not a good day.
I am happy to know that you have someone to talk to. My heart hurts for you as you travel this rough road.

You been in my thoughts Meggie, and I wondered how you were doing. I'm praying you find the 'peace in the valley' after the time of dark shadows.
A very long time ago(in college) I read a poem that had the line "...you have to live through the time where everything hurts". I've come to realize that it applies to most aspects of life. A visit home sounds perfect to me. Sending hugs, Finn

Dear Meggie,
I am so sad to read the sad news...It's been a while since i last visited..I'm finding it hard to write how I'm feeling right now as tears well in my eyes and a lump in my throat..
Prayers that you will find peace in the knowledge that GOM is at peace now..look for the rainbows.
Hugs Julia ♥