I have been lying  trying to convince myself that all these excess parts on me, are given to me  with a purpose. They are added lest I lose my appetite and need the reserves to live on. At this rate I could not eat for another year or so, and I would still not be skeletal!
It would not be so bad, if only gravity did not intervene and drag things down to inconvenient locations.

Not that I want to be skeletal~ I once told my very thin mother that Grandmothers are supposed to be squashy and plump, not thin and small like she was. I was not unkind, and we laughed. One of my nephews once told her that her skin was too big for her!

I tell myself I have recovered from the loss of my Mother, but of course that is another lie. Just as I lie about recovering from the loss of Gom. I wake most nights in a panic, wondering where he is, ...then I remember, he is gone forever. 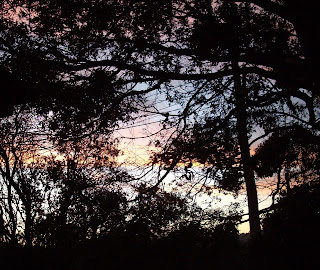 Sunset, through the Lily Pily. I wish I had a camera with a stronger lens, but I could not really justify the expense.
I treated myself to a Tablet, and I lied to myself that I really needed it. I did not, of course, but am I glad I indulged! I get so much pleasure from being able to sit up in bed, and read my 'mail'. It is another form of lying, because I tell myself I do not need to get up, and start the computer to catch up with news and friends. I can procrastinate, and remain in bed a lot later. 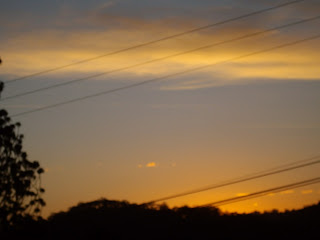 This golden view contained the most brilliant gold 'chunks' that looked almost like symbols. I lied to myself that they were a message for hope for the future, for me. I was frustrated when the camera failed to record how brilliant and unusual they were. 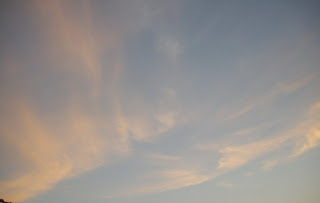 I lie to myself when I go out shopping for groceries, and I buy beautiful fresh vegies, and then never quite get around to using them all. I read my many recipe books, and I promise myself I will try to make some of the best dishes. I lie. I am told this is quite common, and a Health Nurse told my brother she has given up on fresh veg now, and just relies on frozen or tinned. I know of friends who do the same, but I never thought it would happen to me, living in such a privileged country and circumstance, where the fresh produce is so readily available~ if not always affordable!
My Grandmother used to say, "The road to Hell is paved with Good Intentions" Yes, I pave mine daily! 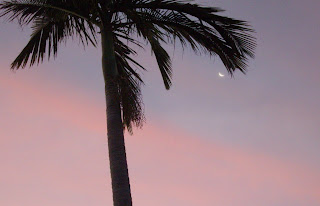 Last night this crescent moon intrigued me, lying under the palm. My grandfather used to say a crescent moon on it's back meant bad weather. I suspect that might have been a lie of sorts, too.

I am not a gambler by nature, but Gom used to love to have his little flutters on horses, pokie machines and Lotto and Keno. I never bother, but yesterday I lied to myself when out with my family for lunch at a Club. I convinced myself I would win on Keno. I did, but it was less than I had invested, so that was another lie! It made me smile though, as I thought of Gom, and how happy he would have been to see me trying. I had a dream that I won a fair amount of money, and so hope springs eternal I gues.

I have that lying problem, too -- including being able to last through a famine. Nice to see you on here! Thanks for finding me and commenting. :)

I have that "good intentions" line down pat. That lying problem bothers me too. Just shows we're not perfect...

I loved your pics of the sunsets and your skyline.

Liars we all are ...even the most truthful of us; especially to ourselves. The saying, "The truth will set you free." only applies to God's truth which has the power of hope.

Still, I think you do not lie to Morty, Honey or Zane. Their trusting eyes burns through any will to lie. :)

It's not lying it's encouragement in some cases at least! Lovely photos.

I lie to myself all the time. "Tomorrow will be different, I will get up before 10 o'clock, I will eat properly, I will go for a walk, I will do some housework" Then, lying in bed at night I realise I have done none of those things.
But hopefully, there's always tomorrow. When I don't do these things I used to feel guilt, because I raised to do the 'right thing'. Who is to say what is right for me? That was then and this is now, and I try to do what gives me peace and a modicum of happiness.
It's not that I have given up, more that I have decided to please myself.
I think it might be more fun to age disgracefully..!!

Sheila said...
This comment has been removed by the author.
2:39 am

Sometimes we have to tell ourselves those little white lies just to get by. A little hope and encouragement for the darker moments. I prefer to think of them as hopes and wishes rather than lies. Sometimes it's all in the semantics!

How strange Meggie - over here in England we always say that a crescent moon laid on its back like that forecasts a dry spell as it's holding all the water in it. Don't beat yourself up about fibbing - indulge yourself my lovely and be gentle on yourself. As for the waking up and panicking about GOM not being there it will diminish I promise you but I can't tell you when as we're all different but when I was widowed my doctor referred me to a bereavement counsellor - I visited her with great scepticism but she helped me enormously as I could rage about the unfairness of everything without upsetting someone who was also hurting and have a bloody good bawl without feeling like people were sick of hearing me, she gave me the strength to cope and move on to accepting a different viewpoint - give it a try what do you have to lose and it may help xxx

Love that song!!
We had a firey sunset the other night too - very orange, something not too common here really.