I am thinking since GOM retired, our roles have reversed somewhat.

I kindly remind him of the days when he blithely left all the mess, & never gave it a second thought.

It is like a red rag to a bull! I was WORKING too, as it happened, but apparently that didnt count. GRRRRR!

But now that my arthritis & slight disabilities keep me in some pain, he is very good about vacuuming, so I have to roll with some of his punches, I guess. I have harped on about his obsession with the pantry, but I have decided to concede that point to him...he can have it. As long as I can still find my ingredients to prepare meals. Which I quite often can't- but he can usually tell me where he has put it.

And, to give him his due, he is good about grilling some chops, for us, or steak for himself, & making a nice salad to go with, if I am not feeling up to it, or busy with the sewing.

Another reversal we seem to have reached is the body temperature. He was always warm, had warm hands, warm feet. And he was very kind about letting me put my frozen feet onto his toasty ones. I was a thin smoker in those days, & circulation was compromised I suppose.

Now I am a somewhat chubby nonsmoker, & my hands & feet are mostly quite warm. GOM is still a somewhat chubby man, but now his feet & hands are quite often cold. I will hold his hand, but I draw the line about the feet!

And, I have started a new project! I could just spend all day sewing, & he wont mind. He even suggested some meals so that we can have 2 sittings from the one dish. He never used to like casseroles much, but has discovered he really likes them now, so it does make life a bit easier. Especially if I get on a roll with the sewing.

Mary kindly posted a PDF file for the pattern for a Spider Web quilt. I was impressed with her nice version, (check it out!) so decided to give it a go. Of course the first thing I did was make a mistake! O well, I managed to learn from it, & now it seems to be moving along, without hitches, & promises to be quite a nice quick project, which is what I need, after my 'quilting block'. 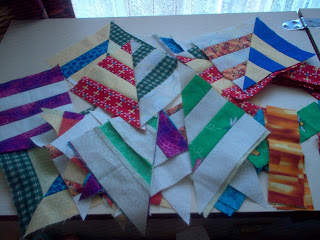 As my stash is just made for scrap quilts, it is an ideal pattern, with quick results... providing I dont make more mistakes, haha. I rather wish I had gone for the total scrap look of Mary's quilt, but never mind, at least it has got me moving again!

It's nice to have help around the house even if it's not always done the way you would yourself. The blocks are looking good.
I always enjoy seeing other peoples' fabric scraps.

I love your GOM stories! And it looks like you have a great start on your piecing. The colors look great!

I had to laugh at the body temperature differential! Mr J and I have to have our own doona - his of lighter materials than mine as he is a furnace. I think it also has something to do with the fact that I like to role myself up in mine during the night, like I'm in a cocoon! He'd wake up with no doona - he is warm but not that warm ;-)

I can see some slow role reversal occurring at times on the home front. Glad the 'block' is over and the sewing machine is humming again, it's good for the soul. Can't wait to see your webs all together...

So what mistake did you make? I made a couple cutting errors but since the blocks were sashed it didn't really matter in the end.

Oh, I wish I could make one of those!
I dont even have a sewing machine, but being an obsessive hoarder i would immeditely make it my business to collect 5 tonnes of fabric bits, were I to take up quilting. Looks hard. It wil look so nice when you are finished.

Re the GOM, my goodness, anyone who tidies the pantry is more than welcome in my house anyday. Mine is full of spiders.(They catch the pantry moths.)

J, I love looking at other peoples fabrics too.
TAnna, I wish I had gone the more scrappy version.
N, It is a worry, maybe he needs his heart checked.
Mrs G, I am playing with the combinations now.
Mary, I cut one block on the wrong angle!
F, I am a hoarder too! I have to keep trying to tame it down to a smaller mountain.

Your blocks look great. You mean housework continues to be an issue after all those years? Sh*t! My husband does housework, which would be nice, only he thinks I should do it all, and you should see the look on his face as he does it, it is not a smile. I would rather he did nothing and didn't hassle me. I mean I have always been messy, he always knew that.