It is now over fourteen years since my mother died. I find that very hard to believe.

I cried, at the mention, or thought of her, for five years after her passing.

There are times when I still miss her desperately.

I can remember her telling me the same thing, about her mother.

I guess, we never, ever, get over the loss or our mother, if we had a close relationship.

My Beloved Brother has just had a series of surgeries. Not related. But one of those 'patches' ~ or 'batches'~ which seem to attack us from time to time.

He is recovering, well, from his second surgery, which was less serious than the first.

He mentioned that he keeps 'smelling' our mother with him. In his vehicle. In his house, in the Hospital, both before, & after his surgery.

I know what he means, & I too 'smell' our mother in times of stress. Or even, in times of relaxed contemplation.

After our Mother had died, & I had returned to my home in Australia, I was driven, you might say, to plant growing things.

I was beyond the age to have babies.

I longed for a baby to cuddle. I would wish my children would produce more grandbabies, for me to cuddle, & confirm, the continuity of life.

I am told this is not unusual.

It is all about the primitive urge to produce life, to keep on living.

Reproduction. Such a Primitve urge. We really have little control over ourselves, if we think about it.

The Human Condition, seems bound to want to reproduce.

I planted pots with lots of plants. I grew from branches of wonderful plants existing in the garden. I had lovely success, & I rescued plants from 'Death Row'.

This Brunfelsia was one such rescue. I took it from a seedling in our rented garden. 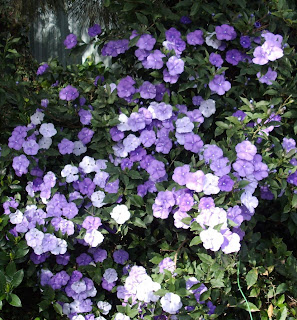 I look at it now, beside this Strelitzia, which we bought, & planted, when it was very very small. How proud it seems now. 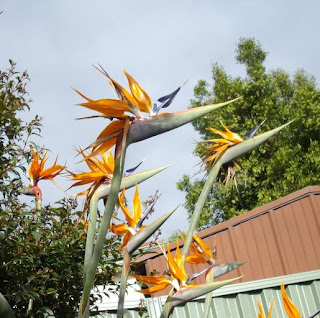 This strange & slightly Magical plant is flourishing in our garden. I cannot find the name of it, though I have searched the Internet. It is a very pretty pale pink & I love it for living in spite of me!! 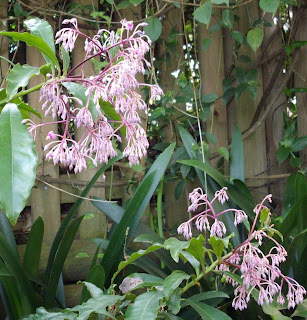 Here it is beside another Brunfelsia, which a kind neighbour gave us, when we were redesigning our garden bank. 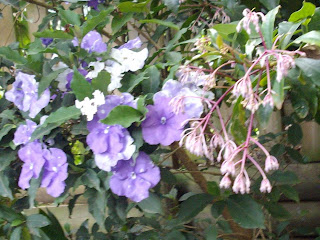 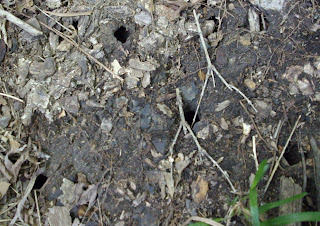 I really have no idea what these next plants are. I bought them at a Garage sale, & they have continued to live on the bank, in the shade of the Grevillea, & various other trees.
The slugs seem to adore them, so they never get very large, or vigorous! 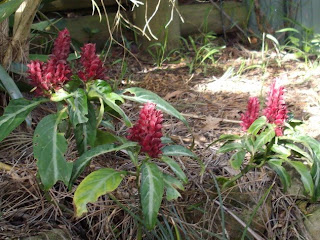 I suspect that death, will always awaken an urge to live on, & we will contine to follow that urge throughout the ages.

Labels: Brother., Joan Baez, Life has many surprises. Are we really dead. Mother, Luba the Baroness

I do so know what you mean about losing one's mother. Last week would have been my mother's birthday and I decided to go to the crematorium since we now live near enough to do so. It was a waste of time for me though as she definitely isn't there but with me wherever I am! Like you I still sometimes want to tell her something, think that she would be interested to know such and such and in times of need I can still "feel" her with me. I have no grandchildren and haven't yet felt a need for any more babies to cuddle but I know what you mean about life going on.

Your garden looks so very different from ours - the plants are so strange and lovely to our English eyes. You certainly have created something there which will carry on!

Yes, we do so want life to go on. As I age I am more and more conscious of this, and feel sad when people die without ever having had children. My mother died 36 years ago, before all her children had reached adulthood, and I regret deeply that she died before we reached the stage of having those shared experiences which lead to deeper understanding and more mature love. You sound as though you had that wonderful gift.

I feel the exact same way about my Mom who died Dec. 18, 1996. I'm always scratching around outside or with pots, planting things :), and I once told her that I thought I had gotten my love of flowers and plants from her. :) Your plants are just gorgeous, Meggie! Hugs to Honey and Leo. :)

My mom is still here and she treasures all her little great-grands and her one great, great, grand (another on the way). She loves to get pictures of them... she will sit and look and look at the babies.. My mother is 84. Still lives alone and takes care of her own house. She says it takes her longer to do things, but with my sister's and brother's help, things get done... She is excited to see some little goblins show up for trick or treat...

Meggie,
I still have my mother( she is 73) and I love her with all my heart. She is a real gem- this week I called her when I felt under the weather_ I am fighting off this flu bug and winning I think) but it was my mom whose voice I wanted to hear. She sent me a cheer me up card that she made that arrived in yesterday's mail.
However, I do miss my grandmother in the ways that you talked about and sometimes I feel like her voice is with me- guiding me and loving me when I need that special kind of comfort.
Lovely flowers- it is a bit dreary outside today but we do not have snow or freezing rain that is happening around the province today.
I am off to the basement to cull the junk from boxes and get rid of stuff that we no longer use or need.
Lovely post, Meggie.
Warmest regards,
Anna

Your plants are so varied and gorgeous Meggie! I'm so sorry about your mother -- I'm lucky that mine is still here. The urge to create is an interesting thing, isn't it? Good post, as always Meggie!

Hugs to you at this time. Wish I was closer in miles.

Love your flowers...and yes, I still miss my mom after more than 30 years she has been gone. That hole in our hearts is never really filled. Kindred hearts...

Sorry to hear Meggie Hope you brother gets well soon. My mother is still doing well. I talk to her every sunday night through MSN and see her on the camera. Couldn't imagen her being not there.
My father died 11 years ago but very sometimes I feel his presence.
I think we somehow stay connected to them
Your flowers are gorgeous. Send you lots of hugs Arohanui, marja

How interesting that you smell your mother at times - with me it's my dad and his omnipresent cigarettes. He smoked all my growing up years. No one has ever smoked in my car or my cottage but there are times when I smell cigarette smoke so strongly when I am thinking of my dad that I am overcome!

That's funny, the year my father died I became very busy and creative, and especially started growing things, which I never had before. I had a tiny little yard to the reneted flat I had and I planted all kinds of things.

And when my eldest brother, who's rather taken the place of my parents I suppose, was diagnosed with prostate cancer, it was one of the only times I've really felt any tug about not having kids. Fortunately he has recovered well, and I got over the kids thing pretty quickly!

My grief about my mum is complex, still working itself out after 14 years, it's been the same length of time for me, I realise...

Your mother must have been very proud at the way you turned out. You're quite a person.

All these flowers are a great gift for your mom memories.
ciao ciao