Could be April Downpours!

I can scarcely believe it is April. I had a much loved Aunt, whose birthday was in April, and my Grandmother named her Lorna April. She was never known by either of those names, but I always felt April was a pretty name. I loved her dearly, and after my mother died, she became my surrogate mother in a sense, because she was always there for me, and we shared some wonderful laughs over the years, until her death. I still miss her greatly. 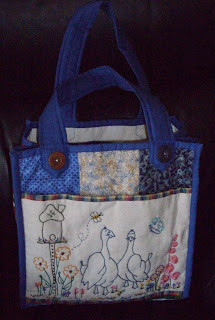 Every now and then, I try to remind myself, that before my whole world changed forever, I used to be a quiltmaker, patchworker, embroiderer. This is a photo of a bag I made some years ago, and have only recently begun to use. I am amazed at how much it can hold!
I have forgotten the name of the designer, and I apologise to whoever it is. I changed several things on the embroidered panel, but much of it is the same. I loved making it, and wish I still had the mojo. 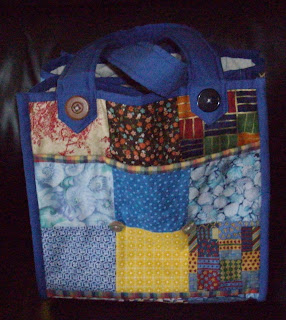 This second picture is of the back of the bag. It has handy side pockets, and an inner pocket of large dimensions. It can hold an amazing amount of 'stuff'.

I have been attending a course, run by a lovely Psychologist,  designed to help Cancer sufferers, and their Carers, (and taking this bag along). I have found the course immensely helpful and grounding. In my moments of panic, I can think about what I have been learning, and try to put it into practice.
I so admire the young women battling their personal battles. And, indeed the older sufferers, who are dealing with Cancer.
I am sure I would not so so well. Of course, I also believe we have no real idea of how we would cope with any event, until we experience it personally.
As a carer, I have difficulties of a different nature, and of course, there are dark days when I feel I am drowning in panic and terror.

Easter seemed to bring it's own demons, and as Easter is the Anniversary of my Grandmother's death, I always find it hard.

When Gom & I were younger, we would host a party on "Black Friday" as we called it. ( As my GP said, he has never understood why it would be called "Good Friday", since the story goes they hung the poor chap for an agonizing death.)

The weather kept nice for the campers over the weekend, but yesterday turned into the day from Hell, as far as the weather goes. Pouring rain, cold temperatures. Today is another horror day. I awoke in the wee hours, remembering I had forgotten to put out the rubbish bins. Since it was raining, I was reluctant to rise from my warm bed.
However, once I heard a truck rumble up the street, I dug myself out, put on a jacket and sandals- yes silly choice I know! I stumbled downstairs and out into the dark. To discover my neighbour was out doing the same as me. We had both forgotten the night before. Luckily we were in time, and so the bins are now empty again. 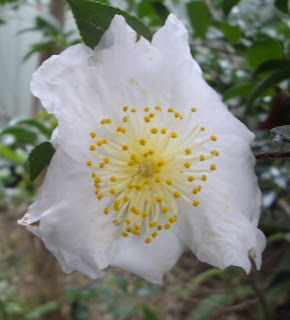 This is a pic of my first camelia opening up. I am  not expecting many flowers this year, since the camelias had a somewhat balding haircut earlier. 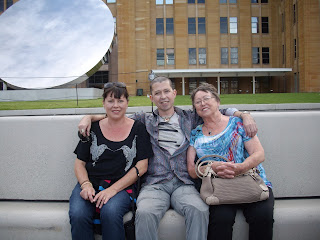 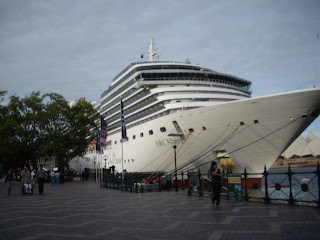 This is a huge cruise ship which was docked at the Quay, and we were told it was on a 99 day cruise. I wished I could go on a cruise. 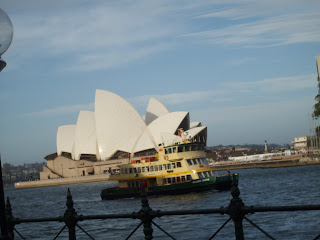 This is the Opera House, behind a ferry that crosses to Manly. I tried to get another photo of the Opera house without the Ferry, but it was blurred.

Recent days have been hard, Brett is becoming weaker, and seems to eat little. There are days when he doesn't get out of bed.
Some of his wonderful friends came to visit him over Easter, and took him out for lunch, but he was very tired when he came home, though admitted it was great to see his friends.
I feel it makes him sadder, to think of all he has lost, and is about to lose.

I was not really a fan of Nick Cave, so didn't go to the concert, but there are one or two of his songs I do like, and I was going to suggest one, for my song for the post.
However, I cant remember any titles of the songs I do like.
So, I will just leave it at Nick Cave.

Thoughts and hugs with you.
Not a great Nick Cave fan but I did love the use the Sydney Opera House made of "The Ship Song". (It should come up on YouTube)

That's a lovely bag you once made Meg. Glad it is now being of use to you. I hope your outing with your 2 did you good?
You are having all the rain and we are getting very little at all.It is unimaginably tough on you and Brett but you must be there for him. Chin up. Pretty camellia!

Meg, Now that you mention it, I do like the Ship Song. I must look at YouTube to see if I can find a clip.
Brett said they felt sorry for the children in the concert, as they had long boring spells, with no part to play.

Ali, I did love the stay in the City, seeing Brett so happy, and he and his sister enjoyed the concert and meeting Nick. Not being a fan really, I did not go to the concert, but was happy that Brett had the chance to meet Nick.

What a beautiful picture. You have a very goodlooking family. I'm so happy for you that you had a good day, but so sad for you in your current situation.

What a pretty bag, and that it is so useful is a bonus. Lovely that you enjoyed some time away with your children, making memories ♥
I have recently learned that a long time blog friend, who confided in me, [and does not visit here] has terminal cancer. Also my SIL from whom we were estranged is in palliative care. Both barely 60 years old. The dreaded disease seems to be all around us.
I'm glad you are taking steps to cope, with these classes. I think of you often and the challenges you have faced in recent times. Hang in there.
♥

How nice for you all to be able to get out.