I call this pic, which I shamelessly stole from some email or other, my "familiar" my friendly Crow, telling the Cosmic Clown, who keeps attacking us, that he damn well better watch out! 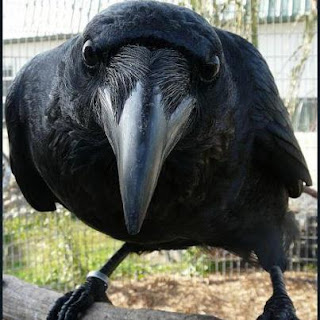 Recently, we were having a clear out of various unwanted pieces of furniture. I had a lounge suite, which though still very comfortable, had been relegated down to the garage, because it was surplus to our needs after we bought a new leather lounge suite.
After Gom died, I was trying to downsize the massive pile of 'things' he had stacked in the garage, and the old lounge suite was one such item. Because it was still very comfortable, and of sturdy good quality, I washed all the covers and advertised it 'Free' on a website.
Next day I recieved a phone call, asking if the lounge suite was still available. "Yes". "Great" said the person whose gender I knew not, from the voice calling, "can we come and collect it?"
"Please do". I asked my daughter to come and help me with getting it out of the garage, as my son was, by then, disabled.
There came a knocking on the door, and I opened up to see a smallish, somewhat, 'mufflered' person, and a very thin woman standing expectantly at the door.
"Oh, Where is the strong man?" I stupidly said, then thought, that is being sexist, so I next said, "Oh, are you it?"   I cringed and died a little!!
I had expected to see some burly man to load the suite. I felt so stupid after blurting out those words.

My daughter nearly died laughing later, every time she thought about how flustered I became.
The first 'person' at the door, was a woman by figure, under the layers, but she had a very strong beard, in that the stubble was quite thick, and dark. We could not work out if he /she was being a man or woman. There was a man in the vehicle, but he seemed to be disabled also, ie, incapable of helping with the furniture. Anyway they decided they liked the lounge & chairs, so we helped load them in the their rather clapped, and battered,  old station wagon.
They left, with the vehicle positively bulging with pieces of lounge suite, and we were left to wonder and ponder.
Then, to our horror, we found one of the corner seat cushions (shaped, so useless for anything else) from the sofa was left behind! I should explain here, that the cushions,  and the back,  and arm pieces all detached from the suite, so there were a lot of pieces and cushions to deal to.
I felt awful, as the lost cushion was no good to us. I duly tried phoning back the number I thought was the enquiry number, on my mobile phone, explained why I was calling, but was told it was a wrong number.??? So we never did find out who they were, or what they thought about the missing cushion. Perhaps they felt that was the reason the suite was free.
I felt awful, as I would never sell, or give away something that was missing a piece or defective in any way. Unless I made it clear whatever the defect may be. I have put our old mower out on the berm, and it has been taken away, by a nice polite man who asked could he have it? I replied please do, we are having a cleanup. We are fortunate here, we can have six household rubbish, or garden waste, Council collections a year. It is so helpful, and if 'pickers' come along to take stuff, they are welcome to it.

This is a picture of me, holding Zane, my son's gorgeous dog. He is such a treasure, and we are so glad we got to rescue him. We can not imagine how anyone could have parted with him, he is so affectionate, and devoted to my son. It was like they were made for each other. He is Corgi/Chihuahua cross, and is just such an obedient clever little boy. We all love him, ...even Honey seems to be quite fond of him.

I have been thinking of bizarre things, as I am often wont to do.
I see those, "Who would you like to invite to dinner, from the departed in history?" questions.

My take on that would be, "Who, from history, would you most like to slap?"
I posed the question on facebook, and got a couple of laughs. We all agree, the choice is just so wide, there would be many candidates I could think of. Henry the Eighth being one, for being such a pig to his wives. (which really is an insult to pigs, because they are gentle creatures, and far more intelligent I would imagine.)
Or Idi Amin, for being an inhuman monster.
As to the living.... well, there are one or two, who spring to mind, and Kim Hung Dung is one of them.

I dreamed it was the end of the world, because Kim Ill sicko had pushed 'the' button. I was amazed at how quickly the cloud reached us, and I was also amazed at how calm I was.
Of course I think none of us can really know how we would react to anything, until it happened to us.

I have been on an Aeroplane that was struck by lightning, and it shuddered and bucked in the sky. I just felt really calm, and was amazed at a normally, very efficient, capable friend, who just panicked. She shook violently, and could not stop shaking for the remainder of the flight. I calmly ate my meal and was not the least bothered. Gom remarked that I had not even grabbed his hand!
I am more afraid travelling in a car, than I am in a plane.

Today my lovely daughter, and my granddaughter took me out to a wonderful peaceful Bamboo Buddha garden nursery, and cafe. It was so beautiful, I would like to return. We then went to have a meal at our local pub, and it is always pleasant and very convivial. We met a friend, and his son, and had a chat. Such a nice outing.

*****************
I recently treated myself to a Tablet. I have had such pleasure using it to read blogs, facebook, mail and various interests,on the internet,  from the comfort of my bed, or lounge chair. How lazy I feel, how priveleged. How guilty, when I think of the poverty that abounds in the world.
I am sure my Grandmother, who loved gadgets and new technology, would have loved it all!

*****************
My daily horrors and fears threaten to overwhelm me. My son is getting weaker, and is frequently drowsy with drugs for his pain.
If I stop to dwell on it, I just go into blind panic and terror.Distractions can be music and mindless TV.
I find I am too frozen to read books now, or do my beloved patchwork.
I wonder if I will ever recover.


Sheryl Crow, Every Day is a Winding Road.

That's a great picture of a very beady-eyed crow! Can't help wondering about your lounge suite's new owners ever missed that cushion.

My dear dear Meggie, these last few posts have been wonderful to read, no matter how you were feeling when you put 'pen to paper'. I have dearly missed you posting, your humor, your 'rants', your 'you'. I rarely have a day pass that I don't think of you and the horror that you must be living in right now---how skewed your world must seem---but I hope you know that there are those of us who have never 'met face to face' that care deeply for you and send you hugs of love and light. Love your bag---one day you will find yourself drawn to the fabric scraps and you will find solace and peace amongst them, once again. I adore the picture of you and that darling little dog!!! You look wonderful. Hugs, my dear friend.

Now I laughed out loud at times during this post. You have to keep writing. Luv n hugs..

I've been away, from home and often from a computer, but am delighted to find some new postings here. I can only imagine the anguish you and your son face every day but am heartened to see you can still find beauty around you. xo

I'm glad your son has such a lovely dog Meggie! Humans could learn a lot about unconditional love and devotion from our four legged friends....I admire your courage. I'd be a basket case in your shoes. Hugs from FL.

I've been attending Friday luncheons of old media types for a few weeks. Yesterday one of my old colleagues said he had drunk so much coffee at the last one that he had he shakes. But, he said, it made brushing his teeth easier!