A Gun to the Head & other Trivial Events

When GOM was the Licensee of a Hotel in Western Sydney, & we had to move into said Hotel, & it was a very different experience to having Hotels in NZ.

Just as many 'characters', locals, & for GOM, just as much enjoyment, & just as many laughs. I was caring for AAG at that stage, & so was not about in Bars, but did occasionally do the upstairs cleaning, & preparation of meals for Accountants when they came each month, & other various tasks.

There were permanant residents, who had their oddities. Luckily for us, a long term tennant died just before we moved in, so we were spared that.

There was a mischievous old woman, who was very lonely, & seemed to have no relations, & few friends. She would hide things from the staff, & do all sorts of odd things which could be infuriating. Such as go out leaving her taps turned on, in her basin in her room, with the plug in it. Resultant overflow flooded the Office downstairs, ruined 3 carpets, plus numerous items on the office desk. Denied all knowledge of the taps being turned on- of course. Like a child, & so alone it was easy to feel sorry for her, but then she would do something outrageously nasty, & it was difficult to be civil. She has remained there through several changes of managers, & owners, & as far as I know she is still in residence She told me she once broke her leg when the floorboards gave way under her! The Hotel was a fairly old building with horrible old concrete floors downstairs, in the kitchen & laundry rooms, & creaky, uneven, old floorboards upstairs, & shabby living for the Management- which is often the case. But as least we did have our own little kitchen, which had been tacked onto the roof, in a little extension.

There was an alarm system in the Hotel, which was connected to the local police station. When we first moved into the flat, our son, who had moved home again, after a stint flatting, wondered what the heck the small square thing was on the wall of his bedroom, so he examined it. Next thing there were police with guns out, flooding through the bars, & our Asst Manager was mystified! It turned out the strange square thing, was a panic button! Previous manager hadn't bothered to let us know about it.
That is when we found out there was another in the passage in our flat, & another in the office downstairs.

The office was a cramped smelly little room, partially under the stairs. It had a big old safe in the corner, & a window with 'peephole' glass for 'spying' out into the bar. The window didnt line up with the only space for the office desk, so it was a bit useless, really. There was always a nasty odour in the Office, & investigations never seemed to find the source of the smell. I remember once a local plumber, removed some floor boards, to find water lying under them. I was horrified, & suspected it must be sewage, judging by the stench. I almost died when he dipped his finger into the liquid & TASTED it, declaring, "No that is not sewage".

In the mornings GOM would go into the office & sort the day's Banking, & attend to other 'office' things. One of GOM's friends, (we can call him S, for Shocked) was husband to a woman who ran the Snack Bar, & he would often come in early to clean the Grill for his wife.

On the morning in question he had come into the office to talk to GOM. Suddenly there was a gun pointing at GOM's head, & a voice said "Give me the Money!" GOM thought it was a joke of some sort, till he looked at the gun. Gunman then pointed the gun at S & told them both to lie on the floor. As the office was very small & cramped that was no easy feat! Then the gunman ordered GOM to open the safe, which was closed, & had to be opened with a slow combination lock. Gunman was pretty hyped up, & kept snarling at GOM to hurry, & S said all he could thnk about was 'If he shoots GOM, I will be covered in his blood!', as he was lying under GOM, as he struggled to get the safe open. Then, after GOM got the money out the Gunman demanded their wallets. GOM didnt use one then, & S was on compo, & told the Gunman, so he just grabbed the money & ran out of the place. GOM hit the panic button, - & Gunman had known about it, as he had threatened & poked GOM on the head with the gun, telling him not to touch it.

Then as they waited for police to arrive GOM rang upstairs to tell me what had just happened. He seemed so calm, & he didnt suffer any after effects. His mate S did though, & I was flabbergasted to find there was no type of counselling available for him, & even the police coundnt offer any advice about where to get some. It took months for S to recover from that episode, but it has not affected GOM & he laughs about it now, as another of lifes 'free treats'.
The Gunman was never caught, though he dropped his hat on the office desk, & both GOM & S gave good descriptions.
We did hear rumours that it was known to police who he was, but that was all.


As to this next pic, I got it in an email & laughed, & thought thank goodness it was just the tiolet paper that SG used for his 'dressup'!!
The joys of small children. 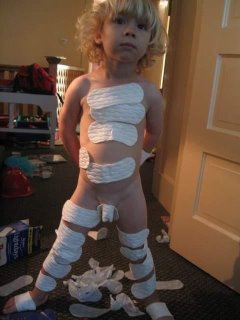 And this little pic is of Maybelle, a small porcelian doll among my babies. 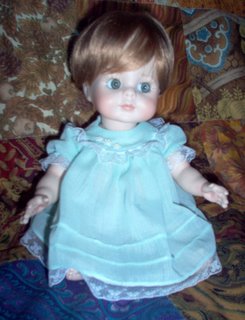 Hi, I found you on My Float's blog so I thought I would come and have a read. How enjoyable your stories are! And I just love that picture of the boy, he really has himself covered there. Be reading you!

I love the dressup! You have nice quilts too, there may be a picture of some on my blog one day if I ever get back to my sewing.
Thanks for visiting me. We have lived in Christchurch for over twenty years, but I grew up in Wellington.

Hi everyone. Thanks for comments as usual.

It does sound incredible, but it is true!
Not much fun at the time, but good for laughs later- & indeed it was a Wild West tale, as it was Western Sydney!

Never saw a gun in our lives in NZ, except for the duck shooting, deer hunting type- rifles all!

What a tale. Amazing that it had no difficult effects on GOM, and sorry that it had on S.

Your story is amazing! I can't believe there was no counselling for S, I know I would have been completely traumatised. It's also very weird that they weren't able to catch the gunman. Wouldn't police have a usual suspects list, particularly since he'd clearly hit that hotel before if he knew where the panic button was?

I love the pic of panty liner boy. Hilarious! My son loves throwing my tampons all over the flat. I'm learning to hide things!