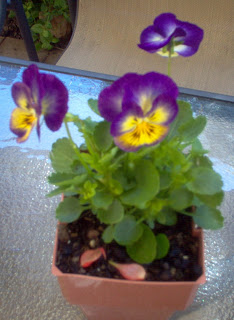 First of all, we have SG here for the morning. We also had him last evening for a couple of hours. We have been to *Bunnings this morning.


SG, "O Yay! I love going to Bunnings!" It is true. We have taken him with us before, & he sees enchantment whereever he looks. But his favourite place in the whole shop is the garden section, with all the plants.


He wanted to buy some flowers for his mother. He was adamant. We looked at the plants in the pots. He declared several to be "Perfect for my mum!" In the end he chose the one above. He was so happy & proud to bring it home in a little box.

Now, he tells me he wants to plant it in our garden, & "Mum can come & visit it!" Not for long, with my brown thumbs!

The house is finished, all painted. Looks much improved. Now GOM is painting the screen door. I am not sure why he is doing it, but I daren't ask.

He seemed to have some sort of 'brain snap' earlier this morning. He came rampaging into my little sanctuary. Started pulling papers about, ranting about, why dont I tidy it up. "It is bloody disgusting!"

"I want to have a room all to myself!" ( I will spare everyone the various retorts that sprung to mind... suffice to say 'padded', & 'locked', amongst vairous other things, came into it.)

I fired back, he has the double garage, & I am almost too scared to set foot in it. Wouldnt matter if I did, as he has everything cunningly stashed so as to be inaccessible, & invisible.


His head, by now was beginning to look like a 'target', to my eye.
I told him to get out, in more or less polite terms. I thought blue expletives, but SG was present. He was rather startled. He wondered what came over GOM.

Gom started ranting about the Hug of bears, which is, perhaps, getting a little out of hand. So I finally cracked & roared back at him.

How dare he. When he has been an untidy pig for the whole of our marriage. His clothes lay strewn about, his shoes discarded for days, socks tossed off & left. Occasionally I would 'go on strike' & leave them there...till I couldnt stand it any longer.


Huff vibes were positively dancing off his shoulders! He quivered in rage. Perhaps I was beginning to look like his target!

He stomped off out. SG asked if we were still going to Bunnings.
"Yes" snapped GOM, "And you'd better ask the old grouch if she wants to come too".

The soothing sights in Bunnings seemed to calm GOM down. He even became quite pleasant again.

And they say women are unpredictable. Sheesh!

I have concluded his new found fetishes for the pantry & his idea of 'tidy' must be his way of coping with his loss of a job- well he is 70, so he knew he couldnt work forever, but I suspect he had hoped he could. It his little power play for control.

It does come rather hard, after being the 'boss' of the house so speak. For all those years I could be responsible for it, & basically he didnt give a rats. But now he is seeking for new balance I suppose. And, being a Leo, & a natural 'leader' & being used to being 'Boss', I guess it is hard.

These are rocky times. Most of the time though, he is fairly placid, if a little obsessed over the pantry.

And in spite of 'dark thoughts' we have never come to blows.
Just the odd verbal stoush.

Hmmm... too much togetherness not always a good thing.

I hate it when Fixit nags me about sorting out stuff. I'll do it when I'm good and ready. (Maybe)

You know ... I think you've hit the nail on the head. Speaking as a know-it-all virtual stranger who lives several thousand miles away, it sounds like your husband may have a touch of the malady that post-retirement men are prone to. Some of them identify very strongly with their jobs or haven't built too many interests outside their jobs, and they're not sure what to do with themselves once they retire. Thus, the compulsive tidying of the pantry and grumpiness and fiddling around with painting screen doors and such.

What he needs, I think, is to be useful. Everyone needs that, it's just that we women have more things than our jobs to let us know that we're useful. Are there any activities or groups he could carefully be encouraged to join? Volunteering at the library and teaching kids how to read, or something in his specific field of expertise?

Or I suppose you could simply paint a target on his head and let nature take its course ... Bunnings is bound to paint.

"Bunnings is bound to HAVE paint" is what I meant.

togetherness in old age is a good thing....... provided you go a little deaf. The Scot is deaf and I am developing Selective Hearing. Oh and I do mumble to myself a lot. And when really mad at him I sing. He hates that.
Looks like one of them weeks Meggie but at least you have us who understand. aubirdwoman

SG, my senitments exactly! It is my small domain, to keep as I wish. My brother & I always laugh, as our grandmother was from Yorkshire. We have been told of the stubbornness of Yorkshire people, - you know... dont tell me not to step in dog shit! I will if I want!
Yes, Tanya, I know that is what he needs, to be wanted & useful, but it can be a little hard to pander to an ego 24/7.
Sheila, he is deaf! He now has hearing aids after many trying years of denying he was in fact deaf. Now it seems to be his glasses. He wont get more, he has a thousand excuses why he cant read or see, certain things. Of course the fact that his mother & an Aunt got Alzheimers looms large in both our minds at times.

We love Bunnings here - it was one of the Master's first words ;)

Sorry about the disharmony :(

I think you're right to suspect the need for control of something, anything. I remember my FIL going through similar outbursts after he retired and feeling so sad for my MIL who was often the target, but you know... she never really seemed to let it bother her. That always amazed me.

I think he is suffering from RHS (retired husband syndrome), mine will be retired in a couple of years, but he spends most of his spare time in the garage 'making things' Sounds good, but he likes to have them in the house..!
While it sounds good, and might auger well for his retirement, I have visions of the place looking like somewhere the seven dwarfs might live within 12 months..
Snow White I ain't..wicked witch ? ...I may be..!
I had a friend who actually took a job for the first time in her married life, when her husband retired...LOL

This post made me think of something I wrote down from one of Anne Tyler's books......."women may find marriage useful during that little childbearing phase. But...as the years go by, they need their husbands less and less while their husbands need them more and more. Men expect all that listening and marvelling and yes darling---aren't you amazing; those balanced meals and clean sheets and waxed floors; and then the blood pressure monitoring and the low sodium diet and the hand holding when they retire and can't think what to do with themselves....."

I'm not quite that cynical, but it made me laugh nonetheless. I can SO see it in my in-laws! And in us? Of course not! Marriage being a give and take alliance, you give more one year, you take more the next. And so it goes. At least you have a pal to grow old with.....

Even when GB takes an unexpected day off .... I resent it. Whats HE doing in my space???

I'm sorry. And no, of course you shouldn't have to.

Maybe what he needs is a shed? SG seems to have his heart in the right place, bless him.

Hi all, I probably sounded more bitter yesterday than I intended. Most of the time, the garage is GOM's 'shed'. We dont have space for a real shed. And he has never really had hobbies- his work was his hobby. He has mostly indulged all my hobbies, & I am careful to thank him for that. He just has an off day now & then, like we all tend to.
Sorry Tanya, I was not 'snapping at you'. I know the wisdom of your words are true. Sometimes it is hard to see over the sides of the trench of S**T I feel I am wallowing in. Life is not all beer & skittles, but neither is it all s**t & sludge!

I love Bunnings too Meggie! Lovely to see SG showing an interest in plants already, that will probably last him his whole life!

You're too funny -- sounds like our house! TheManoftheHouse is always whining that he "wants a room of his own." Reminds me of that old saying: "My husband said he needed more space, so I locked him outside." ;-)