Perhaps it is the onset of winter. Or the wet weather, we have had almost continuously, for a week. Grey skies, damp feeling, gloomy news.

I have heard some very sad stories of people who are alone, so to speak. They have no family, & if they have a partner, & that partner dies, they have to go into a Home. It must be so hard to keep the will to live in those circumstances.

One poor woman had no clothes at all, to pack, when she had to go into a Home. Her partner had cared for her for years, with help from Community based Services to shower her. She lived in her nighty & slippers. It was all she owned.

I am not sure why her story affected me so deeply. She will be the tip of the iceberg I guess.

Another story affects friends. They are to be 'relocated' they know not where. They ~being the State Housing Service or whatever their name is this weekk~ are taking the house, bulldozing it, so the land can be used to erect 10 or so units. Small boxes of neurosis ridden people, would seem to be the indicated end result, if some of the recent, similar, projects are anything to go on.

It seems obscene to those of us who know how well loved that house has been for 30 years. They have improved it, at their own cost. They have kept it like a model showhome in a magazine.

We have been told the Retirement age is being increased, to 67, rather than 65, as it has been. The theory is less strain on Government coffers for Pensions.

Now they are trying to sell the idea that it will be better for everyone. "Use it or Lose it" 'they' say. A fit body houses a fit mind.

From my grim observations of my Mother in Law's horrible slow painful death from Alzheimers, all a fit body does, is prolong the death. She was one of the fittest women I ever knew. She rode her bicycle everywhere. She never suffered from high blood pressure or any other 'old age' related disease or illness. She smoked cigarettes, for as long as she could remember how to. She ate, probably far too much, chocolate, but it never seemed to have any ill affects on her health.

A temple to a lost mind, which meant she was a long time dying, even though her mind had long since left.

It took years, for her body to die, because it was so fit, I would suspect.

Who are 'they' kidding, when they say fitness keeps the mind active. Bah!

Those who have gone before.
A Great Grandmother's headstone.
Goodness knows where her husband is buried, but it is not with her last resting place. 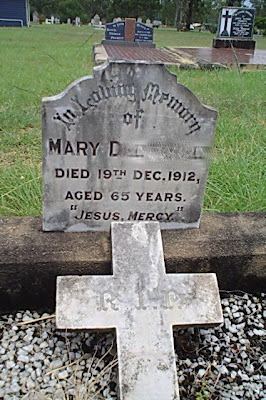 Here, more Greats gone before. Including a son who died when young, & another, who was not so young. 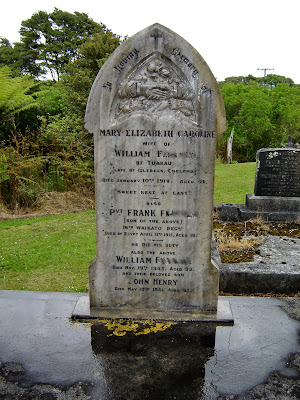 My father, who died in the night. It seems sad, to think he had had 2 wives, & 8 children, yet he died alone. 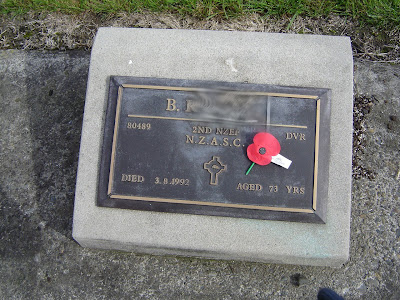 My Mother's parents, with plaques for our mother & an Uncle, who were cremated.
Our mother died surrounded by all who meant the most to her. With her death I became an orphan. I was glad to be there, but it did not make her death any easier to bear. 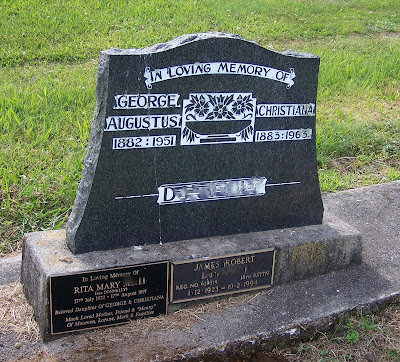 I have long had a love of cemetaries. They always seem so calm & peaceful to me. It does seem a shame, that they will become a thing of the past.

I have no desire to be buried. I want to be cremated, as my mother was.

A somewhat morbid post. I have tried to be more positive.

Connie Francis, My Heart Has a Mind of it's Own.

We are all sleeping in too!

Cemeteries are wonderful for photography.

I hope you regain your impetus soon.

Good grief, Meggie, I hope my somewhat morbid post didn't bring this on, yet I fear it did. Fear not - we all will pass from this earth but in...our...own...sweet...time!

I keep reminding my mother that she is suppose to make it to 101... if she does she beats all her sisters and brothers... she had one sister make it to 100 and another 99yrs+... I hope she can make it... She is still in relative good health... does her own cooking and cleaning... and I am telling myself the same thing... never give up... keep on living... As my sister says, As long as you keep on breathing, you keep on getting that SS check... Really and truly though, I am quite satisfied with my life so far and whenever GOD decides for me I will be ready to go... I will trust HIM forever...

Good Lord, meggie: stay away from the cemetery!
No other place would serve to make you glum.

(Though I did a major project at Rookwood in Art School and I managed to see a ghost, which was actually quite entertaining.)


Don't worry, I am sure you will never be left with only your nighty and slippers, though that is one of the most awful things I have ever heard, because you will always have people aound for you. And you would never STAND for that anyway.

They're doing the same with the retirement age over here too Meggie - I'm just gone 49 and Nigel will join me in November (he's my toy boy!) I reckon by the time it comes for us to retire we'll have to work until we're at least 70, if not 72 or 75 - perish the thought! When we started our family we had our finances all sorted out to both finish at 57, three children to put through University, a larger house with a longer mortgage and most importantly lost financial investments like failing endowment mortgages have changed that picture considerably. Sometimes I think it would be a great idea to sell up and head off round the world in a camper van and sod the responsibilities :o) I'd never persuade Nigel he's far too conventional

We all need to reflect on topics like this from time to time or else we are unprepared. Thanks for sharing.

I have had death on my mind a lot recently. This month was the two year anniversary of my mom's death and nine years for my father. My MIL also died this past month so both my husband and me are orphans. I held my mother in my arms the night she died but being in a coma I don't know if she knew. Death in the end is a solitary endeavour and maybe it's better that way...ciao

Wonder what is going on with the sleeping in business. My wife and I have been taking long naps during the days that I am not working and I have slept over 3 hours on several ocassions. Must be something going on.

Every stone on the cemeterie has a storie to tell. I don't like to go there I get the shivers.
I think something simular is happening here with retirement age. By the time we are old you can't retire anymore I think
It all will bring some dificult times for people

Cemeteries are places for introspection - and every headstone tells a story, sometimes by the details omitted as by those stated. We've been sleeping in too, it's the colder darker mornings. And we have been enjoying it too!

I didn't find your post morbid. Death is a part of life, after all, just like birth. We cross a certain point and it becomes difficult to ignore it.

I'm very sorry about your friends losing their beloved home and being displaced. It's a cruel thing that's being done.

Re: fit body/unfit mind, my grandmother was quite the opposite. Sharp as a tack until the day she died, yet her body let her down, little by little. Before her last trip to the hospital, she pointed at a certain dress and said "I want to be buried in that."

I hope that I and everyone I know will be sharp and healthy until our time comes, then we'll pass quietly in our sleep!