A Character from the Past.


This old school photo was taken in 1951, I think. It was taken outside the block of classrooms, which were known as the Primmers Block. The huge windows opened by sliding open, & on the hot summer afternoons, were a welcome sourse of fresh air, into the smelly stuffy hot rooms.

I can remember the name of every child in this photo. I am not sure if that is a good thing or a bad thing?

I remember when I was growing up, I loved to listen to stories being told, around the family table, on occasions when my Grandmother's 'children' all came 'home' for Christmases, or just to visit.

I loved to quietly sit, & 'earwig' on the adults' conversations, the jokes & the laughter. If I was very quiet & still I would not always be told to go off outside to play.

My Grandfather used to thrill us with stories of Bunyips, which is a mythical swamp monster, who supposedly lives in swamps, or watery areas, in Australia. My Grandfather was an "Aussie" & so we were always excited to hear his stories, living in New Zealand, as we did, & having none of the animals that Australia had. Or indeed, mythical swamp monsters. Though, the Maori believe the Taniwha is a form of monster demon or swamp dwelling creature.

Our Grandfather did frighten us as children, with his tales of snakes. My brother & I both remember being rather frightened of toilets for years, in case a snake came up out of the bowels of one. For a time we lived in an old farmhouse, complete with old outdoor "Dunny" & a huge creeper grew over the shack, & it was a source of terror for my young mind.
There was a huge Chinese Lantern shrub, with orange flowers, & I can remember tasting the nectar in the flowers. Also a patch of Cape Gooseberries, & they were delicious, & fascinating in their little brown cases.

A lot of my memories of living in that farmhouse, involve huge fruit trees, as there was a large orchard beside the house. There were plum, apple, pear & peach trees. And there was a large area with Datura trees, which we called Trumpet Lily trees.

My brother was almost 4 full years younger than I, & so I suppose he was off sleeping in the hazy afternoons, when I can remember spending a lot of time playing with the Trumpet Lillies. I played with the flowers, & took a teaset with me. I dont remember what exactly I played at, but the perfume, & those flowers are very vivid memories. My mother had a little old blue enamel teaset, which she used to let me play with sometimes, & I would play away by myself.

The year I turned 5, which was the normal age for starting school, was a year in which Polio was raging through the country, so all Kindergartens & schools were closed for about a year. Consequently, I didnt attend any sort of preschool, nor did I begin school until I was 6 years old.

I remember being somewhat terrified of being away from my family for the long days, & as we lived on the farm some distance from the School, I had to catch a school bus, which was also a scary affair. They were very long days, & I would be so tired at the end of each day.

There was a very nice family, who owned the farm, & they had a son, who was attending the School, & he very kindly 'took me under his wing'. He would see that I got on the bus safely, & would come to my aid if he thought I might get bullied at school. His name was Stan, & he seemed almost like an adult to me.

I remember the block of Infant classes, that were in a row, beginning with Primer One Two, Three & Four. Older children were discouraged from coming in the vicinity of the 'Primmers', as we were called. The photo at the top of this post has the block of classes behind us.
I think the thing I most disliked about being in the Primers, was the fact that we had to have a nap, or lie down every afternoon. This involved the unrolling of stinky woven coir (? I think) mats, of the type that some people used in their kitchens. I hated them, they smelt vaguely of vomit & dirt, & possibly urine. We had no pillows to rest our heads upon, & were expected to just lie there on those awful freindless, smelly mats.
I remember some children in the first frightened year of school, would wet themselves, possibly with fright, from the orgress teachers. I can never remember those mats getting cleaned in any way, so no doubt they were rife with germs & bodily fluids, including dribbled saliva. I was always surprised that children actually slept on them. I was far too rigid with discomfort & distaste, & am sure I never looked like drifting off.
There was disgusting milk, delivered to the school in crates. It came in clear glass bottles with horrible cardboard tops. We would all have to line up, & were handed this disgusting drink at morning tea time. It always made me vomit, & my mother wrote me a note to excuse me from having to have it. I have since been told that the cardboard smell & taste it seemed to have, was caused by the actual milk spoiling. I believe that, as it sat out in the heat of the morning.
Enough of those shuddery memories!
Sorry to bore you with the Clivea, but it is so pretty to me, & yesterday I discovered it has a very nice perfume! It is actually quite a lot creamier in colour than is indicated by the photos. 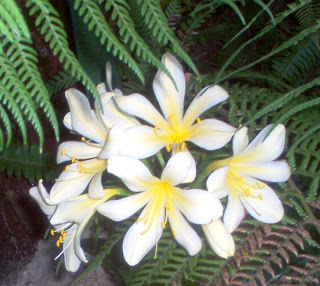 They are very expensive here, too, & quite rare as yet. We were lucky a very kind neighbour gave us this one. 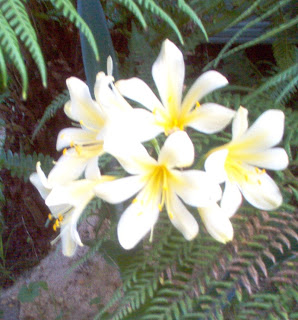 It is Labour Day here in NSW today, so the traffic is quite quiet, though yesterday, it was thick & fast- tourists I guess.
The weather has been very kind for touristy visitors, & I am sure the Footy fans had a nice feast over the weekend, as there have been 2 Grand Finals for them to watch.
NSW will be rather upset, as Melbourne stole in & won the League Grand final.
Not that I care, & I only know about it by accident really! Haha.
I am happy to report I never saw one minute of any of it!
Enjoy your new week.
Simon & Garfunkel, The Dangling Conversation.

What a wonderful memories. It must be great for children to grow up in a farm yard. Esspecially in NZ.
I worked for a while in several kindergarten and in some off them they still let the children have a nap on a mat on the floor. Very different from Holland. I also had to get used to uniforms.

Your school was quite different from mine. I started at a one-room school with 15 kids, half of whom were related to me. I think it was much easier.

I remember the milk being delivered in little cartons - and you can imagine how warm it got in Brisbane. Disgusting ( and I love milk).

but not as rotten as a dead rat in the car boot!

Meggie, I have a picture almost identical to that one, taken of me in kindergarten. I should dig it out and post it. It's so much fun hearing about idential childhood experiences, in a country on the other side of the world from where I grew up. I almost felt as if I was there with you.

BTW, I am never going to feel safe on a toilet seat again! Ha...!

Sweet and bad memories. You've done a good job of capturing the contrast that is life.

What interesting memories. Reading your post brings back my own memories of starting school, and of long days playing by myself in the garden.

Goodness , Meggie , I can remember most of the names in your photo too -- but mainly only the surnames as I went to school with all these ones younger brothers and sisters ! I think the photo may be pre 1951 also ? Perhaps .
I loved the school milk , drunk early in the morning while it was still cold and indeed was a Milk Monitor and so was privileged to get to drink an extra bottle sometimes HaHa
I have no memories of the trumpet lillies , but can remember playing with amazing spinning tops at that property ?
I am going to go and dig out my old photos now too .

What a wonderful (and not-so-wonderful) collection of memories, Meggie. I remember the pan toilet with all its cobwebs.

You did well to remember all the children's names. I went to my High School's 50th anniversary earlier this year. In my mind I can picture all of the children who were there during my time, and remember their names, yet when I looked at photos at the anniversary, I couldn't put a name to any of those in the photos.

I hope you are keeping all of these wonderful stories, either on disc or printing them out. Your family need them, if not now, certainly in the future.

I have class photo of my 2nd grade class and I can remember every child's name, too. Seems like a waste of brain space to me now. Ha! The Clivea is spectacular.

It is amazing what we can remember about our schooldays! I remember the smell and taste of school milk, it was disgusting. You seemed to have had a great time growing up on a farm. (My daughter went through a phase of worrying that ET was going to come up out of the toilet!!!)
Kim x

Different country,but your early school days are very reminiscent of mine. I too can remember the names of all the kids in my first grade class. Well, they say the earlies memories are the last to go.

oh, yuk, I was on the tail end of that ghastly milk business...I think the ideology behind it was quite noble, just that suburban Sydney weather generally is not kind to milk!
Only had to drink it a year ot two.

I was teaching year 5 the other week. I made them all come and gather round me "on the mat" even though there was NO MAT! ha ha. I just wanted to bring my mat experience full circle. Then we talked about what the word contemporary meant, and how a kiln cooks clay. Fun!

Wow. They closed the schools for a year?! I can't imagine them doing that now....

I don't remember milk, but we had to line up for a spoonful of very fishy cod liver oil when I was in kindergarten. Every day!

The clivia is beautiful..I'm begining to think white floweers are the loveliest of all.

Loved your stories of school. I don't have a class picture but I probably could not name them all. Every now and then our little town paper will print a class picture and I never remember all the names. I fear that my memory is not keeping up. So many things I forget now. Gotta make lists!! I always lived "in the country" and had to ride the school buses. The town children were the "popular" group. Now so many of the people I know that live in town or in subdivisions come here and say "you have your own little piece of heaven out here." LOL

Just catching up with you Meggie. I'm happy to see you're not GOW today and the rat incident is over! LOL.