We have had the 'Cool Dude' here for a goodly portion of the day. "Take my photo Nan," he said. "I will wear my Shades!" 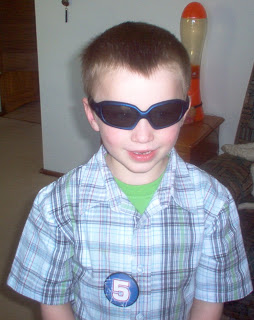 He also wore his #5 Spiderman Badge off his Birthday Card.
Sorry for the lava lamp, which looks strangely penile in the background.
I used to poke fun of people who took photos, seemingly unaware of the background. I have been guilty of more than 1 faux pas concerning background effects. I try to monitor the background scenery, but sometimes the moment escapes, if you dont sieze them.
The 'Cool Dude' is a man of very strange dietry habits. He was thanking me for his red jelly I had taken down for his birthday. He mentioned the fact that he "really really like Green Jellies Nan!"
As it happened I had made him a green jelly early this morning, thinking it could be a surprise addition to lunch for him. I duly produced the jelly, he decided which plate he would like to eat it from. He rejected it, on the grounds that he thought it was not jelly.
"Are you sure it is not green slime Nanna?" So I showed him the packet, which he had been getting out of the pantry cupboard, regularly telling me he needed it to be made up.
"Are you sure it is not green snot?"
He remained unconvinced, & so the jelly was rejected. Never mind, it so happens Gom likes green jelly!
When he went home, his mother said he was demanding " Nutella* sandwich" for his birthday tea! He would probably get Macaroni Cheese, which remains a staple favourite.
*****
I am sitting here, soooo hot! It was a fairly warm weekend, but not unbearable. Now, it seems, today has turned ovenlike! A humidity factor has been added, & I have suffered all day. I LOATHE this weather.
I have been trying to grow my hair into a semblance of a satisfactory 'style' I feel I can live with. I can tell I am going to have to return to the 'pig bristle look' which is coolest, for the Summer. I must be worrying about it all, as I dreamt last night that my hair was long once more, & I was proud of it, & very happy with the colour. On waking, I felt a dire sort of dread! An indication that all this healthy hair I have grown, is about to be razored from my head, & I will once again be wailing, re the state of the awful savaging some 'hair dresser' -hah! I use the term frivolously, & vaguely- has inflicted upon the sorry sight that will be my skull for the next 6 months or so.
Last week I recieved a phone call from the Southern City from a close friend, who named her daughter after me. I never liked my given name, but my friend did, & though she knew me by my nickname, she chose to use my given name for her daughter. I did regard it as an honour, though I felt somewhat sorry for the girl, being given a name, 'out of time' so to say. She grew up, not having anyone named with her given name.
My namesake has recently given birth to her 2nd daughter. She has not been given a nickname herself, (though her father suggested calling her my nickname, initially) & she has chosen unusual names for both her daughters, & won't, I would think, find any/many children named the same. Her daughters are both very wanted children, as she was. I wish I could be present to cuddle them both. (I am happy to report, the names are not hideously grotesquely spelt names, they are genuinely unusual names which are 'nice'.)
I really have to get over my 'clucky patch'. I need to accept the fact there will probably not be any more grandchildren. (I might insert here, I am quite prepared to accept & love, step-grandchildren. What child doesn't need to be loved? There is no such thing, as too much love!!)
*Nutella, is a chocolate & Hazelnut spread available here in Australia.
Joni Mitchell, Carey.
Posted by meggie at 10/15/2007 06:49:00 pm

Ha ha Meggie. Thanks for pointing out the penile lava lamp.
You're so funny.

Your SG is quite a character isn't he?

How funny that Cool Dude thought you'd prepared green snot for him! Love the grin in the photo. He's a very cute young chap, isn't he?

Happy Birthday to the Cool Dude. hadn't noticed the lamp till you pointed it out (thanks!). We have had a bit of a chocolate fuelled weekend here, so much so that they forgot to mention the jar of Nutella that's in the cupboard! Hope it cools down for you.
Kim x

Cool Dude looks like a handful.
I think green jelly looks like green snot too, astute child.
I like old and unusual names, and especially if they are spelled in the traditional rather than 'cute' ways.
xo

Your little dude is cool indeed. Names are such a responsibility to choose. It's always nice when kids like the ones you have chosen for them. Did your namesake like her name?

Y'know, if you hadn't said anything about the lava lamp...

As if you would serve your beloved grandchild green snot! How funny.

I have never even thought of the backgrounds of my pictures...now I will have to go look and be horrified!!
Your GS is VERY cool. Poor Zach is 6 and stressing about not having any wiggly teeth. He is certain they will NEVER come out!
I love hair dreams. My hair is ALWAYS long and beautiful in hair dreams.

I think all of your photos are great. Of course I am not sure how much of a compliment that is since it is coming from the world's worst photographer.

Your grandson is indeed one cool looking dude.

Loved the picture of the "cool dude".. I must confess, I'm a background looker of other's photos, but not so much of mine...LOL I had thought, that looks like a lava lamp. But I never thought penile until you said it..LOL

Cute five year old! Same age as my grand daughter.....Naming a child is difficult. I had a name I thought would be perfect for Liz, should she be a girl. Obviously she was/is a girl, but my perfect name just didn't seem to fit. Back to the drawing board. Now I couldn't imagine her having any other name.....We didn't over-exert our imaginations as Elizabeth is my middle name and my maternal grandmother's name. But she went by Lily....

Happy day to your little man!

My dad would only eat the red and my son loves Nutella very, very much.

I'm with the others, I would never had noticed the lamp if you hadn't pointed it out!

I tend not to look behind, but when I do, I see some great things! :)

Yes, Meggie , You have a good Irish name as a 'real'name -- nothing the matter with it . I always loved the name Mary gave me .
The Dude does indeed look cool , the lava lamp is OK too , Do you remember the photo you took of me all those years ago in the Southern City holding Chester , your evil looking black cat ? You managed to get a huge pine tree to appear to grow right out of the top of my head HaHa

Well it seems as if Monday was the day for birthday's. I'd forgotten the Deb's granddaughter's birthday was the same day as Chris' until she reminded me. I hope your grandson had a wonderful day.

I love taking photos and I try to be conscious of the background but I also have things coming out peoples heads at times. I too close the 300 photos on my trip this past weekend and ended up keeping 70 of them. They weren't all bad but I've gotten in the habit of shooting more than one shoot so I have my choice when it comes to printing them out.

You can be honorary nana to my feral pair if you like!