The Little Man with the Hammer..

This is a pic of our 'Fuzzy Reality'. Last evening. The sun was setting, & cast a glare upon the photo. I usually crop them, so that no neighbours are visible.
To the right of the photo is our spare room window- which is where I sit to sew, & also compose my posts.
The window beyond that is our bedroom window, which looks out over the valley, & down to the village. 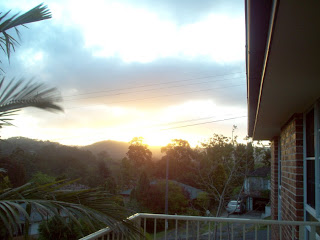 On the left is the palm tree, which grows at the front or our balcony. It is a Bangalow Palm, which are native to Australia, & I am very fond of it.


Across the road is our neighbour's drive way. He shares this with people who live on a block hehind his. He is a friend, & he lives alone. He is a tradesman, who is generous with his time & his skills, to his neighbours.

It is nice to feel we know our neighbours, & have acquaintanceship with them. They are all nice people, & I am sure, would be supportive should we need them. We are on call, should they need us, & it is nice to be called upon occasionally, & nice to know they can feel comfortable enough with us, to call when necessary.

I feel this is how neighbourhoods should be. We should all be here, to support one another, if the need arises.

We had very aged sisters, who were accross the road from us. We ran errands, & visited often. They both had to go into homes. Have both passed away. I have cried at their passing. Another couple, lovely neighbourly people died within 2 months of each other. Shockingly, unexpectedly. Nice, new folk bought the houses. We are here, should they need us.

I feel we were brought up with those ideals. Our Grandmother was a friend to the neighbourhood. She was called 'Danny', my childish nickname for her, by all our neighbours. They all came to consult with her at various times, & she was loved & respected by many who knew her. She kept her wise counsel, & never gossiped. She was a true lady, I feel.

To return to the little man with the hammer.
We had SG today, for some hours. He has a very heavy cold, with accompanying cough, a rather brochitic sounding one. Each day we have had him, I have tried to steer clear of the involuntary coughs errupting. I have got him to blow his poor litte nose, to rid of the green mucous. Placing the tissues into the toilet or the waste bin, hoping not to spread the bacteria. Washing his & my hands, hoping to prevent cross infection.

He was reminiscing about his babyhood this afternoon. Asking why he was absent from photos of his parents with is sister. I tried to explain, he was not even an egg whe the photos were taken. He couldn't seem to grasp it all.

He reminded me, that I used to cradle him in my arms when he was a baby. I used to hold him till he slept, & he said, "I used to sleep in your arms Nanna" I agreed, that was true. He snuggled into me, & went to sleep this afternoon.

We had a friend come to visit. He watched SG fall asleep, lying in the crook of my arm. He noticed I looked very tired. I was. The little man with the hammer was in the back of my head. At the base of my skull. Reminding me, I need some rest. I am tired.

But, who could resist the trust of a little boy, resting, so blissfully safe, uaware of life's harsh realities? So safe, in his Nanna's arms. Safe from the outside world, of expectations. Of life's unpleasantries. Just. Peacefully. Safe.

The little man with the hammer can call again another day. Perhaps I will give him time, attention. But today he can get in the queue, behind SG. Who needs my attention more.

I love those lyrics.
"Catch a falling star,
And put it in your pocket.
Save it for a rain day.

And when that rainy day comes a calling,Some starless night
You'll have a pocket full of starlight...

Who knows..how many people pass by and look at the light of the room where you usually sew....
It must be great to be friend with the neighbours...it sounds like you are a big family.
Your new blog is wonderful and I really like the picture you have in your profile.
ciao, ciao

I'm sure you made a precious memory for SG by letting him fall asleep in your arms. Far more important than a headache for sure.

I know my neighbors well enough. We wave across the yard and send each other Christmas cards. That's about the extent of it.

Really nice post Meggie. When I was a kid, I lived with my grandparents for a few years and those are some of the best memories of my life.

That's a lovely story about the little man. My little man is due to be born at any minute. Just waiting for the phone call!

i love your header. Everyone seems to be redecorating at present!

i love your header. Everyone seems to be redecorating at present!

I haven't been here for a few days so had some catching up to do. You are hilarious as usual! Sometimes I think about how lucky we are as kids not worrying about taxes and bills and such. Wouldn't it be nice if we all had arms to hold us tightly and securely as we slept.

There's nothing I love more than a grandchild asleep on my lap.
I like the new banner, you said you were redecorating and I wanted to pop by and look. Your roses are beautiful.
I hope the little man is on the mend..xx

Meggie you sound like the loveliest Nanna. SG must adore you.

Hope the man with the hammer has scarpered.

Hi Meggie. Seems you live in a wonderful place. How nice to be in touch with your neighbours. I had that in Holland too. We talked over the fence, they came to borrow some sugar and visited us on birthdays. Here in Christchruch are the fences so high. We see our neighbours only once a year.
Oh and what a lovely nanna you are.
That was quite touching. I love the
falling star especially to have a pocket full of starlight.

Isn't it funny what the little ones remember? And he will always remember how good his grandmother was to him, the same way you remember your grandmother! Finally, a song I recognized and your lyrics are close enough...LOL

Dear little SG - I hope he's doing better now and that the cold hasn't moved on to you!

There's nothing quite so wonderful as holding a sleeping child. That is, assuming one's bladder isn't full, one's leg hasn't fallen asleep, and one's back isn't hurting ...

Your SG will always need you more than anything else. My son is currently asking me for stories about when he was very new in the world. "And what did the little baby do then, mummy?" which is just adorable. SG will have lovely memories with you.

Ahh, Meggie, I'm forever behind in reading your posts. You always have such interesting thoughts. I love what you say about neighbors -- isn't it funny how neighborhoods can be so different? We live in a neighborhood where we hardly know each other, yet we've lived in ones where everyone were friends and socialized together. And best wishes for you and your SIL to get your health woes straightened out. The AU health system is something I haven't thought about -- guess I should though as my youngest will be coming your way in February for a semester of study abroad. I'm very excited for him and wish I could be bundled in his suitcase!