I suppose every small town has it's share of 'odd people' or eccentrics.
It seemed the small rural town where I grew up, had many such people, who tended to live alone or with their cats or dogs & their eccentricities. They were generally accepted about the town, & we were taught not to be rude to them, or ridicule them, or laugh at them in public.

Of course it didn't stop us, when we were kids, from laughing behind their backs, & having a snigger at their tatty old clothes or 'funny' smell. And though I lacked the courage to do it, I have seen my bold girlfriend strutting along behind some of them, mocking their walk, or their pompous strut.

One such old man always wore a bowler hat. Why I am not sure, but he invariably dressed in a three piece suit, with stained waistcoat, straining over his enormous pot belly, & pants which seemed somewhat filthy. They were possibly even urine stained! I dont think I ever got close enough to sniff him. It was a dark navy striped suit, & I cant remember if the shirts were white grey or blue. I think there was always a somewhat stained tie under the waistcoat, which was always buttoned, on even the hottest of days. He really gave me the creeps, & he had a very unusual name, which was always used in full, as in Farley Ballin. Which was not his actual name, but he may have relatives still living, so I won't use his real name.

There was a family whose house was very close to the centre of town. It had been the mayor's residence, but the Mayor of the Day, must have built it himself, because the whole grounds, including tennis courts, still belonged to the family. I dont even remember the Mayor's name from my days, but I do remember the Mayoral Mansion. Rumour had it, that in days gone, there had been huge garden parties held in the grounds, & the tennis court had been well kept, & well used. The gardens had been formal, & they had been lovingly tended, during the Mayoral years. The most prominent memory of it, in my mind was an enormous Magnolia tree, which had those huge cream blossoms the size of Dinner plates, & the smell was just about heaven! I would deliberately dawdle as I walked past the tree, & deeply smell the wonderful perfume.

Among the 'Dags' which is a name New Zealanders used for 'hard-case types' who were unusual, there was a painter/paperhanger/decorator, whose nickname was Cot. I am not even sure what his real name was, but everyone referred to him as Cot. He was the best man at his skill in town. His work was perfection. He had a wonderful eye for colour & style.

Cot, however had a problem. Cot was given to going on Benders! During which time he would be unavailable for any sort of work or even sensible speech. He would emerge from these benders a changed man. He would be thin, from weeks of not eating properly. He would look grey & wizened. His skin & hair would be in a terrible state. Gradually he would begin to recover & once he drove off his shakes, & regained his health, he would begin working again. He would work like a veritable demon, a man driven.

Mostly this worked very well, but as he aged the 'fever' seemed to come upon him more frequently, & he began to fall off his personal wagon slightly before completion of the job. He lived in an old caravan alone, apart from his faithful mutt. The dear old dog saved Cot's life numerous times, as it would go insane, with barking & biting at the unconscious man's clothing, until he roused to burning bedclothes, & tumbled out the door of his caravan leaving ruined bedding in his wake. He was a smoker, & would fall asleep on his benders, & of course his bedclothes woult ignite. The neighbours kept watch when they knew he was on one of his benders. They would watch to see if the dog was fed, & allowed out for breaks. They also watched for signs of smoke.

It was said Cot had a great sense of humour. He would joke about his 'affliction'. He would promise he would be available for complete jobs. As he aged, he got less & less work, as his reliability got worse. No one wanted to hire him, for fear their house would never be finished. There would be women howling at his caravan door begging & threatening him, to get up, & get their house finished. The police would be called, suings would be threatened. But Cot would be in a world of his own, & nothing could rouse him, until the demons were quenched, & released him, & he slowly surfaced into the world again.

I believe he had once had a wife, once lived in a house, but he had lost it all over the years. What a tragic mix he was.


I thought to try to change my boring ID picture, & was thinking of using this pretty flower. However it seems I cant now, unless I change back to old blogger.

Damn bugger & blast it.
So here is this morning's flower pic. 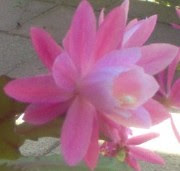 And here is a blurry one of a rose. 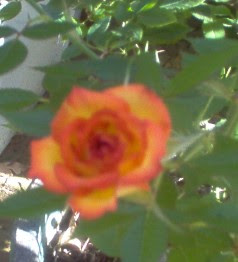 I am asking the camera god for a new camera that can take closeup shots of things, with clarity!!
We had SG again for a time this morning. He was good, & declared he was hungry, so luckily Nanna had some macaroni cheese for him, & was very surprised at the amount he ate. He had had his cereal for breakfast too! Today he was a cowboy in his hat. The guns stayed at home though.
Chris Izaak, Waiting for My Lucky Day.

There were certainly some odd people in your town. Since we lived on a farm I mainly saw odd relatives. That was odd enough! Lol.

We had a guy like that in the town I grew up in. He was a house painter named Bill. He was a smart man and could talk at length about almost any subject in the world. He spoke flawless Italian (even though he was of Irish descent)and when sober, cut quite an impressive figure.

Unfortunately, Bill had serious demons and about once every few months he would succumb to those demons and be completely incoherent for weeks.

I remember walking to school one morning and seeing him sleeping in an alleyway. Sad really. I have no idea what ever happened to him.

Would love to see pics of that mayor's place, in its 'hey-day.'

What do you mean you can't change your ID pic, without switching back to old blogger?!? I didn't think they even had much going on, with old blogger anymore. But.. I don't know.

I do know that sounds 'not-so,' and maybe you should look into it more. Good luck.

Me, I never change my ID pic of my original pink-ish candle. But many do change theirs and it must be easy to do.

Hi All, My brother reminded me that Cot used to brew beer in an old washing machine bowl on the back of his truck, & sometimes his demons forced him to begin to drink it before it was ready!

I don't know why you can't change your picture, I have only used new Blogger and I have changed mine twice. Play around with it, I like the pink flower.

What a sad but fascinating story about poor Cot. Your storytelling never fails to hold me spellbound!

Ahhh, now I have had my Meggie-fix from the last week! From penile objects in the background to your friend who spends nights in a care facility, you've made me laugh and made me cry. You're such a treasure MeggieDear!

Oh, and P.S. What are these artichoke things that GOM makes? They sound wonderful!

Great memories. There doesn't seem to to be as many 'characters' like that around these days does there.
I remember a few from my childhood. One man was a drinker, and had loads of children. The only job he could keep was that of scarecrow, the farmer would pay him to walk (stagger) around the fields, making a noise to keep the birds away. The whole family was quite sad, and it was rumoured that he was from a wealthy family that had disowned him, but I don't know how true it was.

FRUSTRATED!! No luck on the profile pic- now there is none!

newblogger is fraught with bugs.

Someitmes it works for some people, but not all of the time - it's unreliable.

That's why crafty had to change back. Newblogger actually prevented people from COMMENTING on her blog. She'd had enough.

Yay for me! I Think this time I have got it!
I have just spent my weeks worth of swear words- mentally!!

Yes, what H&B said. New Blogger didn't do it for me.

Meggie, yay you did it, lovely!