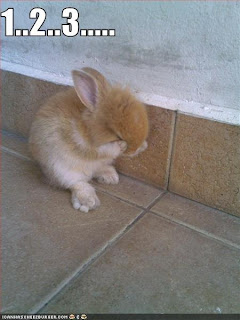 I just adore the "i can has cheezburger.com" site. I visit it quite often, being a bit of an animal sucker.

Somehow this dear little pic reminded me of the changing seasons, which are coming, whether we are 'ready or not.'

Our Summer seems to have sneaked in early, pretending to be Spring. Either that, or global warming is much worse than we realised. It has been gaspingly hot here for the past few days, & the thunderstorm we had on Friday just made it all seem worse.

Jogging about the blogging world, I see so many pictures of the most gloriously coloured leaves, in the Norhtern Hemisphere, where, of course, it is Autumn. The wonderful strong, rich, reds, the hot, beautiful, oranges, & brilliant almost electric rusts, & golden browns. Sunstruck yellows, limes, faded greens. I am sure our autumn coloured leaves dont attain such strong, brilliant colours. I wonder why?

Is it the light, or the lack of, or the strength of the sun? Does the sun bleach the colours out? Or might it be the different types of trees that grow? The promise those glorious greens seem to hold don't last very long in this dry, hot climate. Not on the deciduous trees at least.

I know that we never seemed to see such brilliant colours in Christchurch, either, & many of the same trees grow in Hagley Park, & the Botanic Gardens, as grow in England. Many of the Northern hemisphere trees, of other countries, also.

I have watched the wonderful rich greens coming on the trees, the wonderful young lime coloured leaves. Golden new leaves, that will gradually turn a darker green, as the Summer comes on. Even the Eucalypts have a myriad of new colours, as they sprout new growth.

It always amazes me, to see the wonderful brightly coloured Rainbow Lorrikeets, & Rosellas, & to see how they blend, almost into invisibility among the shrubs & trees. Even the pink & grey Gallahs blend into the grass as they peck around searching for, I know not what.

Our birds in New Zealand were much 'quieter', in a colour sense. Introduced birds were prevalent, Blackbirds, Thrush with beautiful dusk songs, Sparrows, who have seemed to diminish recently. Native birds tended to be dull & quite difficult to spot in among the native trees. Many of which were dark evergreens.

In rural areas in New Zealand Pine trees of many varieties became popular for use as windbreaks, hedges, & delineating areas, such as hiding the woolsheds, stock yards, or sheltering the dog kennels, or just as windbreaks for the houses, affording some privacy as well as boundary markers.

Most old houses would have had some conifers, macrocarpa, lawsoniana, & pinus radiata. When the occupants had long gone, or the house had crumbled away, the remnants of the gardens would be left, overgrown, dark, & lonely. Often foreboding, as only those gnarly old trees could be.

As a child I have vivid memories of those old pine trees. Their dark, threatening, shapes, the carpet of needles so quiet & stealthy somehow. I always thought of Hansel & Gretel, & always had a shiver on entering large stands of such trees.

I loved the pinecones however, & loved to go & gather them for the fire. My father made me a very nice owl, out of a handsome pincone, & I wonder if that is where my lifelong fascination with owls came from. though some say I was a witch in a former life, & that is why I love owls- & wolves, though we had none of those in NZ!

I remember the pine cones could be rather treacherous to burn on an open fire- they were given to spit in protest at being burned, & a good fire guard was needed to protect the hearth & carpet! Sometimes even the furniture! I was 'gifted' a spot burnt armchair, which had been a rescue from Gom's first marriage.

You have no idea how much I loathed that hideous holed, ugly yellow, vynyl covered chair. To this day, it remains in my mind, a symbol of my MIL.

A memory of an old man, who lived in a very tumble down old cottage. It was surrounded by many old plants, where a former, perhaps lovely, garden had once thrived, & been lovingly tended. There were several banks of pine type trees, & many thick vines, surrounding his dwelling.

As children we used to venture across the paddocks, to hide, & peep at poor Old Billy's house. He had a beard, & longish hair, & he could occasionally be heard muttering away to himself.

A particular shrub of pink small flowers, with a spicy fragrance sticks in my memory. A very old fashioned shrub, which no longer appears in modern gardens. I loved it's fragance, & recall it vividly, to this day. The slightly sticky leaves on the tips of new growth.

Most scary, or surprising, was Old Billy's 'Midden'. We lived some miles inland from the ocean. A short distance by car, but not exactly a 'short' distance on foot. To my knowledge, Old Billy didnt have a vehicle.

Old Billy, must have been a shellfish lover. There was a huge pile of Pipi, & perhaps Cockle shells. It had obviously been created over a long period of time. I was always curious about how, or where, he got his supplies of shellfish. I suppose there were many fish skeletons among the midden piles, but I don't remember any stench or vile smell. I do remember it being very high, & wondering what would be made of it all, once he was gone.

I don't ever remember "Old Billy" stories really, in the township. We kids probably made his lonely life a bit harder, sneaking about spying on him. All he wanted, was to be left alone, to live his solitary life, in his little old, crumbling ruin of his "home".

My Beloved Brother probably remembers more than I do, about Old Billy. He spent more time, with his mates, roaming about the paddocks of the neighbouring farms.

Meggie I think Ruru ( NZ owl or morepork )is my favourite bird.

The shrub you mentioned wasn't a Kalmia was it? The little flowers look like they are made as a decoration from cake icing.

Ali, I loved the cry of the Ruru, & it lives on strongly in my memory!
I have looked up that Kalmia on the net, & would almost guarantee that is not the one. It is true the flowers looked like cake decorations, but when I looked at the samples, I dont think that is the one?

I really found this so fascinating, Meggie! It is great to learn more about different parts of the world. And I have this image of you jogging around the blogging world, and my word, I am smiling!

I suspect that the temperatures have something to do with the leaf colours. I have also read that it's the hours of sunlight that cause the leaves to change, not the weather. In consolation, you have a lot more flowering trees over there than we do, like Jacaranda, which I love.

Down the lane behind my grandmother's house was an old house that no one lived in. It was called the "old Marg house". In spring the yard was full of yellow daffodills, a thorny bush with small red flowers and old wild running roses. We'd go down and pick the flowers. I know in days gone by, someone spent a lot of time in the garden tending those flowers. Eventually the house was torn down and the yard became part of the corn field. Unless, you knew where it was, there is no way you could know now!!

Nice story. It reminds me of a house we used to find scary as children. One of the neighborhood kids had us convinced an old man with a gun was behind the curtains watching us. So of course, we hid in the bushes for hours and watched back! LOL

I thought you Antipodeans hated rabbits. Anyway, lucky you. You're coming into your summer. Wish we were. I think I'll move Down Under for this half of the year and then come back for our summer.

Meggie you really are totally fabulous! Your description of the different fall colors is so vivid, and your dark description of the old, crumbled houses with their foreboding hedge rows and abandoned gardens is appropriately chilling as we approach Halloweeen..
We have few old, crumbling buildings here as developers snatch up any old property. Everything is becoming new or rebuilt...pretty much characterless

We are in full blown fall in this part of the world, although for the most part, the temperatures wouldn't indicate it.

I love the "Old Billys" of the world.

Meggie your post is fantastic....... how many memories, how many colours in your descriptions
and it is true that sometimes we start writing something and then we are taken somewhere else by our stream of consciousness.
ciao ciao

You should not be giving these stories out, on the Net, for free! You should compile them and sell a book!!!!

What Ms. solb didn't mention is that she (and I) live amongst a pine forest, so that our fall colors come a plant at a time, rather than in great glorious swatches as they do in those deciduous forests on our East Coast.

I meggie I also love the all year around colours. It's true that there are not many autumn colours here. I am a bit wary of the pine trees here now. I read an article that when there is wind they can cause and aggrivate asthma.