As you can see from the pic taken yesterday, I got to walk on the sand at the beach, at last.
It was one of those beautiful days, just perfect. The warm temperature, the lack of humidity, & a gentle breeze, almost no clouds. I can believe in magic on such a day. 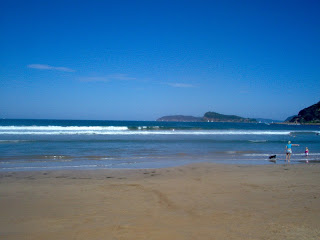 There were plenty of swimmers, and the Life Guards were out, on patrol. I walked down the beach alone. GOM preferring to sit on the sand & watch the passing parade.
I breathed the wonderful salty air, & was just in heaven.

I had suggested we go to a Market which is always open at the weekends at one of the beaches. It was a long time since we had visited the market, & it had changed a little since our last visit. A few new traders, some secondhand & "interesting Olde" shops. Nothing really appealing to us, but we wandered about enjoying the sights. We were a bit disappointed at the lack of handcrafted items. There seemed to only be the LOLs crocheting & knitting baby clothes.
Since I am now a LOL & can do that myself, there was nothing I felt compelled to buy.

I did buy some homemade fudge though, for GOM & I to savour. Delicious, & very fattening I would imagine. Still, the portions were not large.
The stall holder had samples of her fudge flavours on display for sampling. One young lad obviously regarded it as his personal smorgasbord, & proceeded to eat his way from one end to the other. As he was about to finish the stall holder snapped at him, & finally his parents chipped him for being greedy.
It was all I could do, not to clip his ear!


Here are some of the cast-offs from the ocean, along the walk on the sand. The sand looks more golden in real life, I dont know why it looks so grey in my pics.
There are no exotic shells to be found on these beaches, but small children -& me- find them fascinating. I think of the creatures who once inhabited them, & wonder what became of them, to have left their homes abandoned.
I paddled my feet in the lovely warm seawater, & dug my toes into the sand. It was a free treat for me. 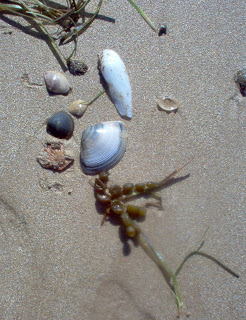 I love to see seaweed, & fancy a necklace for a mermaid made out of the 'beads' of this seaweed. 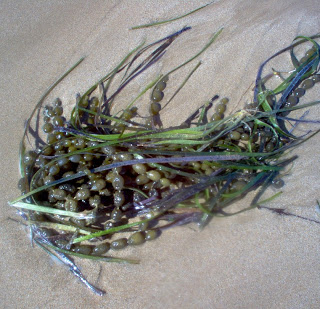 When we were children, we used to spend a lot of weekends at a beach we called the Mount. It's full name is Mt Maunganui, & Ali Honey has posted of it before, & so have I.
It really was a wonderful beach for children & adults of all ages. There is an Ocean side & a Harbour side, so it is wonderful for surfing or just paddling.
We often used to visit an old Great Aunt & Uncle, who lived close to the ocean. The old man used to go fishing in the wild ocean, standing on the shore, & he would take us with him, over the sand dunes to the ocean side where he fished with a contraption he called a Kon Tiki. He made them himself, & they were a tin box like structure, which the waves would carry out to sea, on his long line, & the fish would get trapped in the box assembly, which would be baited, & when he hauled them into the shore, we would see the fish inside. They were very successful devices for catching fish, & there was always fish on the menu at their place. He would gut & clean the fish on the beach, & the screaming gulls would be in heaven. Sometimes he would take them home to clean, & he used the guts for fertilising the garden.
I can remember going with him on kelp gathering forays, after there had been bad weather. The beach would be covered with huge mounds of kelp, ripped from the ocean floor, & cast up on the sands of the high tide line. He would cart it home, in a homemade cart, & would use it for fertilising the gardens. He grew vegetables & some flowers, & considering the land they lived on was just sandhills, he did have quite a wonderful garden.
Our old Great Aunt suffered from rheumatoid Arthritis, & she was 'chair-ridden' poor old soul, so she couldnt go down to the beach, & spent her life in the chair in the corner of her lounge. She could still knit, & I remember her poor hands with the fingers bent double into the palms, & I dont know how she still managed to knit.
She was my Grandmother's youngest sister, & she had snapping brown eyes. Some of our cousins were scared of her, but really she was a lovely old lady, with a great sense of humour. After her husband died she had to be put in a home, & spent the remainder of her days trapped in a bed, surrounded by old women with dementia, & so she had no one to talk to.
Perhaps the saddest thing about her condition was, it had not affected her mind, & she spent lonely bored days lying in her bed. My mother used to visit her regularly, & would always try to take her some of her favourite food. She could be very acid, & quite savage at times, but now, I wonder she was nice at all, as the pain of her arthritis must have been dreadful. At least I have modern drugs for my pain.
I must go down to the sea again....(one of my mother's favourite poems)

I really envy you your walk on teh beach. We are so far from any water and sand. I did walk a lot when we visited our daughter in Australia. The first time I went I collected lots and lots of those shells as gifts for my landlocked students. THey loved them. We also rode bikes at low tide on the hard sand. So much fun. Maybe next winter (summer for you). I hope.

Such marvelous stories; thanks for sharing them. I've never seen seaweed like that in your photo.

Bless your great-aunt's heart; what a hideous thing, to be bedridden with her mind sound and no one to talk to. I imagine she knitted as long as she could simply because she didn't want to quit living!

I've heard about people using seaweed for fertilizer, but always wondered - is it salty? Is the salt an issue at all for gardening?

Walking along the beach has long been a favourite past time for me. We have beaches around parts of the Great Lakes here, we are on L.Ontario, so no real sea weed, or shells for us. There is something so bracing about the breeze coming off the ocean.
Poor old auntie...
My dad has dementia, and it's so hard to communicate with him. But to be able to communicate and having few people to do it with must have been very frustrating for her, I'd be crabby too..!

The beach looks idyllic, great pictures, thanks for sharing.

J, hope you do make it over next summer.
T, I think our Uncle soaked the seaweed somehow, but I am hazy on that.
S, Poor old Aunt, she suffered a worse fate, by still having all her senses, I felt. And yes, no wonder she was often crabby.
F, the beach is lovely, & I have had many nice swims over there when it is hot. The water is still warm from the summer.

Very envious - our beaches are too cold and windy yet - and it will be MONTHS before we get to them...

Your Mum was a lovely lady. The apple doesn't fall far from the tree!

You evoke such wonderful images. I can practically feel the sand crackling beneath my feet and the seagulls screaming above my head!

i also enjoy walking along the beach. On Easter Monday i spent the afternoon at the beach with my sister and three nieces and other family members. My nieces and i collected shells and the girls took them home in a bucket.