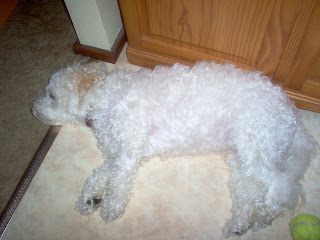 We took the dogs for vaccinaions. Heatworm vaccintations. It is Leo's first vaccitination for the heartworm, but he has had other vaccinations before. Perhaps before his dominant male hormones kicked in! He is a fearsome dog now.

This is Honey who was very well behaved, tolerated everthing at the vet visit, & was a model patient. 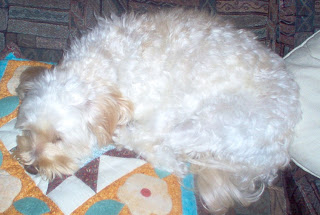 Leo could best be described as a 'problem dog.'
On entering the surgery waiting room, Leo proceeded to voice his protest at my standing at the counter, & not attending to him. A Senior Vet, woolly headed, at the pracitise is very opposed to "little yapping dogs, who dont obey"!! "Bad dogs" he mutters loudly. So we cringe in the corner, trying to shush the loudly barking hostile little dogs. Going ARRRh ARRH ARRRH!! as they strain at the leashes!!
And, of course, they ignore us!!
And we are met by further glares from the woolly-headed scowling Vet.
And out comes our smiling, lovely Vet, with blonde hair, & lovely welcoming smile. She has met these dogs of ours before. She loves gentle Honey. Who has a joint problem on one of her legs. But it is deemed to be a 'watch & see' situation.
She gets a clear bill of health & has her vaccs with a gentle little growl of protest at the second needle.
GOM takes her out into the waiting room where she is so social & gorgeous, people cant believe she can be tetchy at times!
And in the meantime, the vet gives Leo his vac...not very well recieved, but nevertheless, no harm done. Then the toenail clip. Off she takes him growling all the while.
A muzzle was required for the proceedure. He is a very dominant male. He decided to pee, as well as poo, so the vet had quite a task on her hands! He stunk like I would imgine a skunk might when he returned, & I was gagging on the way home with him, harnessed into the back seat.
And as an added bonus, on the way out of the Vet's. there was a large LARGE pair of what I would imagine must have been Huskies, in the waiting room. These dogs were so huge the male of the pair was the size of a Shetland Pony, & the female was mean looking, & not much smaller!
So, you guessed it, Leo decided to whoop & holler at the exetremely large male dog, who could scarcely believe his ears or eyes, & so there unsued a mad struggle while GOM exited with the dogs.
I just waited to pay the bill while being treated to the "Woolly headed, grumpy"
nontolerant vet, who glared in our direction.
Our loveley Vet is really tolerant, & I think she just loves dogs!
It was not one of life's treats''!! haha. But both dogs seem ok tonight, & of course we will continue to love them to death- so to speak!

Oh, yes-- a trip to the vet's office can be so traumatic for so many... humans, canines and felines alike! Always dramatic, for sure. How I loved reading the series by James Herriott years ago, "All Creatures Great and Small" by the English vet. with all his real-life tales of veterinary practice in and out of the surgery. Glad your two survived their visit... and you and GOM too!

At least one of your dogs behaved...

Sounds to me like the grumpy, woolly-headed vet is in the wrong business....

Actually the grumpy woolly headed vet is apparently a whizz with native animals, in particular reptiles! How suitable!
There is another really nice male vet, who does Chiropractic for animals, & he is just lovely. Has treated Leo for us, when he put his neck out. And Leo didnt growl at him either!