Here are the 'babies'. Leo has been giving Honey a hard time, wanting her to play with him, & challenging her to try to get the lion. She just snaps at him to leave her alone. 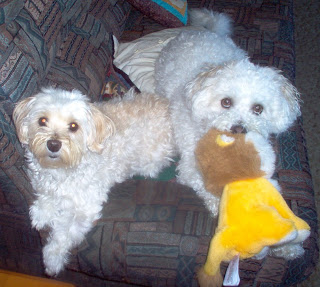 My Beloved Brother rang me from Auckland to have a chat, & Leo could be heard growling & carrying on like a spoilt child, demanding my attention. My brother is not really a dog person, & each time has very colourful, & inventive suggestions as to what I should or could be doing with Leo. He hasnt met Leo in real life, but hears tales of his various misdeeds.

One of his milder thoughts is to have Leo stuffed, & mounted upon wheels to be pulled about where ever I want. Of course he doesnt mean it, but I play the outraged dog lover.

He has met Honey, & she is a good little quiet dog, so he doesnt have suggestions for her.
I thought I would post my favourite camellia. I love the colour of this one. 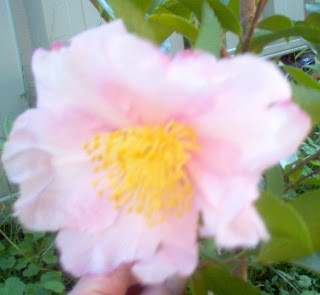 These are the weeds which come in abundance, & flourish, & seem to feel they were invited! I dont know what it is, but it covers the ground so thickly, & lushly, it almost seems a shame to pull it out. I once told GOM that I would rather look at the green of weeds, than see bare bald earth, & it is still true, to an extent. 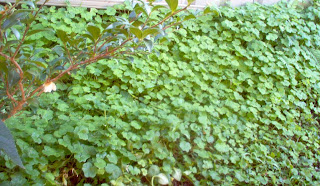 Here is another shot of the favoured pink camellia, it is clearer than the first one, but the colour seemed too light. 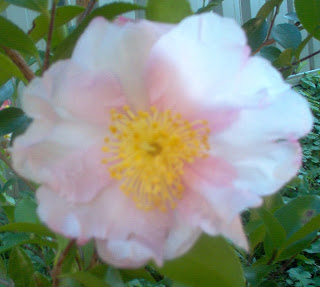 We are trying to get some quotes for new railing on our balcony. It seems to be almost impossible to get people to :
A, Turn up to quote.
B, Suggest a price less than the cost of a small Third world country!
C, Send out the quote after having measured & discussed.
Initially, GOM did the phoning & begging for people to come to quote. Of his 3, one turned up, & declared a ransome would be appropriate payment.
One has never been heard from again, & we presume he must have fallen from a balcony somewhere.
One came & measured & made fatuous suggestions about stainless steel, & wire, & glass panels. On being told that would be ridiculous on this older style of house, he whisked off, saying he would post the quote. We are still waiting, 3 postal days later.
So I tried to T up some quoters, by telephone.
One is supposedly to turn up this morning.
One laughingly took my name, address, & phone number, & promised someone would 'get back to you, to arrange a time'. I am still waiting, 3 days later.
We are also wishing to get the house painted. As it is brick & tile, the painting does not amount to a great deal. But it is two storied, & so GOM cant possibly do it. Besides I would have nightmares & live in terror of him plummeting off the roof, so for my peace of mind, contractors are preferrable.
We have had quotes from all 3 who turned up to quote, & they are all much less than the hideous ransome for the small railing. Two quotes are very close, & one is suspiciously low, so we wont go with him. We dont want the paint washing off in the first shower of rain, which has been known to happen. Besides the dearer quotes named the paint brand they use, so would seem wiser choices.
We really need to get the railing done, as it is rusting badly, & I have heart palpitations every time someone goes out onto the balcony. To say nothing of the eyesore it has become.
Fairly recently, we had a new, large, patio awning erected in the back yard. I just realised the cost of that was far less than the suggested price for the small balcony rail....how can that be?
GOM has just brought me a cup of coffee. I rise much earlier than he does, & I have one cup with my breakfast. Then he makes me another when he has his breakfast. I have tried to tell him the industrial strength he makes, bring tears to my eyes, & a terrible bitter taste to the mouth. Stupidly, I am always shocked to discover he has forgotten I dont like it strong.
Still, I suppose it is the thought that counts.
Posted by meggie at 4/18/2007 08:31:00 am

Meggie , Love your Camellia.
Good luck with your various quotes . You may need the strong coffee to cope with the shock of some of them .
As to my teasing about your dogs , I hope your readers realise , as you do , that it is only teasing ( mostly , haha ) & that given the right circumstances I may even be persuaded to have a dog --- but don't tell my beloved !

Contractors must be alike the world over, because we have the same problem here. We usually end up grabbing the first quote that seems even possibly reasonable and hoping that they will show up when they say they will.

And they don't like to be pinned down, preferring to tell you they'll be by between nine and six, so you have to hang around all day.
We're always threatening terrible things to our cat, especially when he yowls so persistently to go out on lizard patrol....It's all just in fun, though a casual passerby might be shocked!

House repairs always cost an arm and a leg, all over the world I think. We have the same coffee problem here except I like it strong and Husband likes it weak. I usually make so it's usually strong.

Hi,
I found my way to your blog through Hidden Haven.

Just wanted to tell you I love your babies. I have two cocker spaniels who keep us very entertained.

Oh. I'm sitting here reading your blog and all of a sudden some guitar music starts playing and I don't know where it's coming from or how to turn it off. I've only just recently re-watched Close Encounters of the Third Kind and I had all sorts of weird thoughts about alien invasions of my computer! But I see I must have inadvertantly hit the play button on your side bar! Too funny!

About the quotes - pure nightmare. It's taken me nearly eight years but I have finally found a reliable electrician and plumber. And fencer! I wonder if they do balconies? I have used our fencer twice and he was good. Did everything he said he would and on time and budget. If you would like his details drop me an email Meggie.

And I'm with you, on ground cover. In fact, if I had my druthers, I'd even have all the front lawn pulled up and put ground cover in, and never have to have it mowed again! :-)))

Your babies are very lovely. GB is not really a dog lover either and he is frequently threatening to do vile things to our best friend's Corgi / Jack Russell terrier mix puppy. I finally had to tell him that it is not appropriate to threaten our friend's pets with harm -- imagine how he would feel if someone did that to our girl cats!