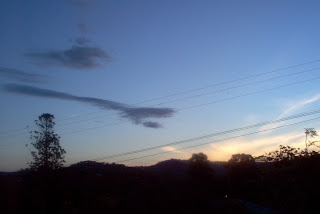 Who would have thought that today's sky would have been leaden & overcast for the whole day. And yet, when I first looked at 5.30am, it was a soft pink cloud that greeted me.... Soon to be replaced by full, dull, grey clouds.


I have spent the whole day without internet access.

It shocked me, how much I missed it! I so look forward to each early morning to read my mail, catch up on blogs, & read any comments I may have had overnight. As Joyce said in her post, I had no idea how much impact the friendship of the blog community would make to my life!

I was so disconcerted, I did all sorts of cleaning !! and some food preparation! Gasp!!

I was 'lording it' over the kitchen! GOM told me to get out! He was terrified I might have made permanent return~ I might see him doing his random checks of the shelf order, in the pantry, ...or catch him checking 'useby' dates! He told me to see if I could get the internet access restored.

I have been very fortunate to have been given "The God Delusion" to read. Plus, I am still reading 3 other books! Plus we have been given copies of a TV show called "Deadwood" which, leaving aside the language question, is very addictive...we cant stop watching episode after episode. Which all makes for a poor sewing record, ....& poor blogging record. But, hell, we need to see what happens next. And I hated History lessons at school!! Who knew it could be so captivating.

I have recieved such sad news from a cousin, who, like me, was besotted with her little boy dog, Phyn. He had a birth defect, & had to be put to sleep. She is devastated! As I would be. But he was a purebred dog. My cousin was assured it was the only way to go...devastation, ~ he was their 'little boy'. Our dogs are cross bred, & seem to be so robust & healthy.. I am crying for little Phyn, he was a gorgeous little dog. Life can be so cruel. 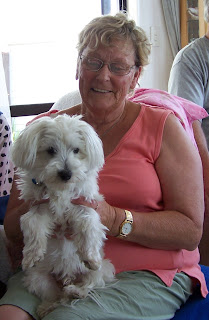 He was so loved! And so treasured. It just doesn't seem fair at all.

Fifi commented on the fact that so many bloggers are quilters, & she wondered why....

I dont have the answer, but for my part it might be called 'procastinating'. Hah!! I blog when I should be sewing or ... heaven forbid, doing housework!

I would rather walk over Canetoad bodies, or sunken cakes, than do housework!!

An Astrologer, who once did my chart, declared, I would "rather not do housework, you think someone else should do that". I roared with laughter! How true!

Did those dark grey clouds deliver, Meggie? Are you still in need of lots of rain? On our drive up the NSW coast, it was amazing how green most places were, especially the Northern Rivers area. Still pitifully dry in Canberra, though.

As you will be aware, I'm still woefully 'dragging the chain' when it comes to blogging, so thank you for your comments.

Sorry to hear about your cousin's dog, they are family members and I know how keenly their loss is felt.
Having no internet can be disconcerting. It's one thing to not blog, or not want to blog, but to have the means denied to you is very frustrating. Glad all is restored..
Chuckled about the housework..
;o)

Oh Meggie, I'm sooo sad about your cousin's little Phyn...I just don't know how one bears the things that we have to bear sometimes. It seems the heart will surely stop beating from the grief. I'm so very sorry for her.

And, girlfriend, I am your twin when it comes to the housework--hate, hate, HATE it!! LOL And I'm sure not getting any sewing done lately. *sigh* oh well, I've been loving being outside digging up the yard. :D My house is a mess cause I've spent the last several weeks out there, but hey, it's still waiting for me when I come inside (unfortunately LOL). Thanks for keeping a check on me, girlfriend!

In my whole life I've only met a handful of people who like housework. I want a maid!
I was amazed to find out how many bloggers are quilters but there are also a lot of cooking blogs that continually amaze. I think if you start looking, there are blog communities about almost everything under the sun.

I do like housework, but I must admit it's only because I like a messy house even less. Does that make sense? I devote one day a week to it and get it all over with in one fell swoop! That's today... and here I'm blogging... oops! ;) Much heartfelt sympathy extended to all affected by Phyn's passing. That grief is so deeply painful, I know. I understand, I am very sorry. He's precious.

Sympathy for Phyn's passing, its always so sad.
Hand sewing is good for TV watching, or being sociable with the GOM.
"Not much housework is part of my blog title"
Too chicken to get my astrology chart done...:) AUBIRDWOMAN

What a lovely picture of the morning sky. I'm really sorry about your cousin's dog, they are so much a part of the family that losing them is very hard especially when they are only young.
Hope everyone who reads this is sitting down but - are you ready for this?- I do actually like housework and have always got a lot of pleasure from making my home look good.

As usual, your post runs the full gamut of emotions - from mourning (your cousin's poor little dog) to hilarious (you husband's terror that you may have 'returned' to the kitchen!!)

I hope you did get some rain in the end. Have a lovely weekend Meggie!

We had rain here today too meggie. Then it turned hot and humid. thanks for stopping by my blog. Killer loves sitting on eggs but will have nothing to do with the chicks. She will peck them and push them out of the nest so I have to give the chicks to another hen that will raise any baby given her. She even mothered the goslings till they got bigger than her and I took them away.

Blogger frustrastion abounds today, it would seem. I had to repair to the library myself so's not to tear my hair out in frustration....and now, mysteriously, things seem to have righted themselves. Shhhh. Don't let those vindictive computer gods hear that.....

Snap! for me too, both on hating housework (and thinking it should be someone else's job) and getting anxious if I can't be online.

....as for Deadwood. can't watch it as the language makes me wince! but the OC is addicted....