A dull overcast day, with small falls of rain, which are not enough to do good to the garden, but just enough to stop outdoors being the choice.

I was reading an article in a Sunday Magazine, "What makes Women Happy?"
Someone had interviewed several women & they had given their stories on what made them happy.

I didnt read all the answers.
But when I saw the headline, my first thought was, it was like asking "how long is a piece of string?" Surely, no two women -or men, for that matter- would give the same answers.

I have always been the girl who asked the inappropriate questions.
On being told the story of how a distant cousin had been found at the bottom of a cliff, alive, with his horse, which had apparently fallen with him, my first question was "What happened to the Horse?"

I hasten to add the family had already told us the cousin couldn't remember what had happened, & couldn't remember falling, & he had lost his sense of smell, but was otherwise ok.
My Brother understood my question- it was on his lips too. And we were both disappointed to find no one knew what had happened to the horse, whether it had lived or died.

I find I get infuriated at news items on TV, that make a big fuss & todo about something, then dont deliver any answers. You are left with more questions than before you heard the 'story'.

And here is a pic of a new bear for the Hug. He has obviously lost his belt & trousers somewhere along the line, & so I suppose I should make him some more. He looked forlorn, & perhaps a bit guilty, in the reject bin at a garage sale, so home he came with me.
The Hotel we used to live in was called the Grenadier, & one of the bars was known as the Bearskin Bar, & had a real Grenadier Guardsman's Bearskin hat on display. The Bearskin got stolen one night, & there was great consternation over it. It mysteriously reappeared, & we never did find out who took it, but it was suspected some wag had done it on a dare, & it had quite a sentimental quality with the patrons, who all seemed very glad to see it's reappearance. 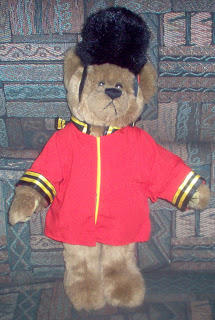 I am thinking I will call this bear Gren.


And here is Leo, taking his ease outside on the sunlounge. He will sit still more for photo ops than Honey tends to, so it is not that he is the favourite, but Honey wont always oblige. They have both just been flea treated. We seem to have had a problem with fleas on them, & it is odd, as we dont usually. 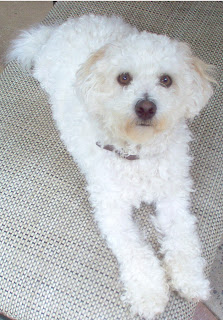 And here is another bear found yesterday at another garage box of unwanteds.
She has a label which says she is called Jennifer, & she came from an Airport Shop in Thailand. So she is a well travelled little girl. I thought she called my name. 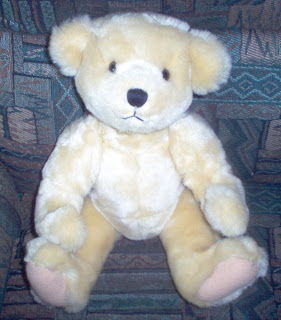 And here she is in the clothes she was wearing, which have had a wash. They dont seem particularly feminine to me, so she just might get a new skirt in pink, perhaps. 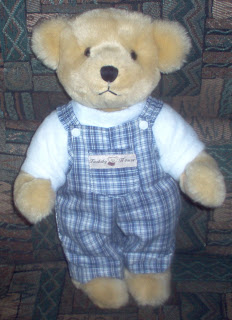 And now, I am going to do some more reading, or perhaps watch some DVD entertainment.
Gom made threatening noises about getting out his Whipper Snipper to 'trim up the weeds'. I always tell him not to disturb the peace on Sundays. It seems just as I am enjoying the peace & quiet, some neighbour will start up some infernal machine! GRRRR.
There was some talk of somone trying to introduce a law to prevent the use of such noisy appliances between certain hours. Of course it was pooh poohed. But I could see the merit!

I love those bears. My daughters have a very large bear collection, rescued, bought and handed down...

Your new bears are very cute.
I too wonder what happend to the horse. I can't see that it would have survived. Another of life's mysteries.
I also agree that every woman would need something different to make her happy. It's so annoying to see a story like that. They'd never write about what makes men happy.

Jennifer is such a pretty bear!

I would have asked about the horse too. As for what makes women happy... obviously there are many different answers, but for this woman right now, good health would be top of the list.

Meggie---the bears are lovely, Leo is, as usual, adorable, but I'm feeling the frustration you mentioned! Because---you never got around to telling us what made the women in the article happy, or , for that matter , what makes you happy....! And Joyce? They don't need to write about the men as everone already knows.

Hi All, I just had to laugh about the men- they had apparently asked the men first! It had been published the week before! But I missed it.
The happiness of the women varied greatly, as they were all talented in differing areas. Some were mothers & declared their children made them happy. Some were career women, & some were both.
I think different things have made me happy at different times of my life.
Right now, one of the things that makes me happy is having great blog friends!