You are a Camel

Today we have been babysitting SG again. His father was sleeping after night shift, & his mother was at work.
We took him grocery shopping with us, & he did his best to bribe us into buying cakes, & various sweet things. When I told him we werent buying things like that today, he said, "I am cross!"
So I told him that was ok, he was allowed to be cross. He seemed a bit nonplussed about that answer, so he quickly spied out another item to ask to have. But he seems to have grown out of tantrum territory.

When we got home it was lunch time, & he seemed hungry, so I made him some sandwiches, which he had, then he asked if he could have an icecream. So of course, soft Nana gives him one.

He has a little slide photo clicker that shows animal shots each time you click it.

He zoomed around the garden, taking 'photos' of Honey & Leo. He showed me, then he informed me he had taken my photo too.
I said that was nice, & he triumphantly said, "Yes, you are a Camel!"

And he asked me what Camels eat. I said I was not sure- what the hell do camels eat??- so he told me they really like Icecream!

He knows I dont eat icecream, & dont like it, but that was so he could have mine!

One more day has passed with no sewing & very little else of interest being achieved. We are having plumbing problems again! GRRRRR. We have been using the downstairs shower, & toilet, & I have kept reminding myself we are lucky to have an extra. But lame old ducks dont need 13 stairs to pound up & down!

And I dashed into the fabric shop before collecting SG. And almost wept. They have all these new fabrics, & I neeeeeed them!! Well, really,.... I want them! I am going to go back alone with more time, & see what I can choose for some small project. (She says,.... with UFO's all over the wall, & stashed in cupboards!) Even if I just go back to pat them, & dream, it will be worth it! haha.


And here are two of the UFO's- a wallhanging supposedly going to say, 'Feather your nest with love.' 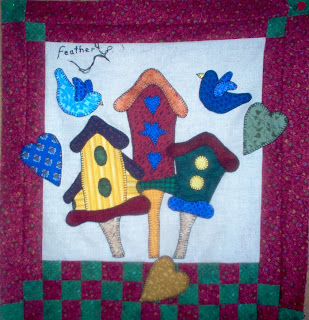 And this dear little rabbit, that I had hoped to get finished for Easter. Never mind, he can go into something yet to be decided. 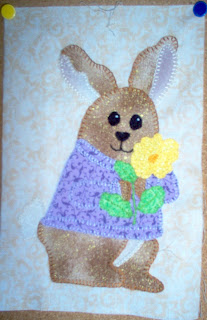 Such a shame, now that the long weekend is over, the sun has returned, & the day has been really warm & fine.
Depending on where you come from, I guess it is Murphy's Law, or Sods Law!

You know I've never thought about what camels actually eat. I figured it would plants/grasses etc so looked it up and they're herbivores but one zoo site I found said they will eat fish meat bones and skin if hungry.

I look on fabric buying as therapy so am allowed to buy whenever I feel the need, which is when I am near a fabric store. No guilt that way.

I had no idea what camels eat... I'd believe ice cream, but then I'm quite gullible. That precious bunny is just too sweet! Hope your plumbing is fixed soon!

C, how sensible, looking it up on Google! My brother is looking at business for sale, so he Googled it.
Joyce, I had a little spree recently, but these new fabrics begged me to buy them. Therapy is a good idea.
Joke, I never thought of that. I kept thinking of them in the desert, & where would they find herbage to eat? And do the different types eat differing herbs? As to fish...a desert wouldnt be the best place to find them??
Mrs G Think the plumbing is a big problem to fix. It is due to neighbour privet.grrrrr.