This is a modern doll's cradle. I bought the cradle in kit form at a Market. I wanted to try my hand at folk art painting it, & after I had painted it, I assembled it, & it sat in our bedroom, with a doll in it. 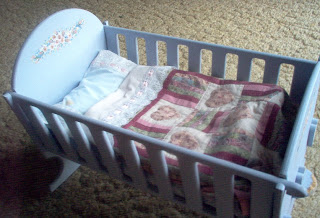 You cant see in this pic, but Leo remodelled the end of it, with his teeth, when he was a little puppy, & so it now lives downstairs with most of the other dolly 'stuff'. I must repaint it some day!
And this is a pic of the little quilt I made before I got the cradle. It was the first dolly quilt I ever made. It is wrinkled because it has been in the cradle, covering a doll. 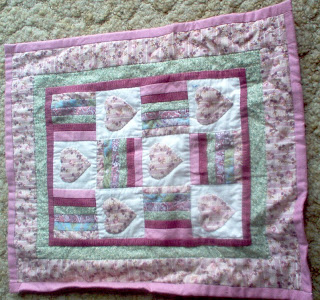 This is a really special cradle. This was made by some distant relative, whose name has been lost with time, but it has been a treasure in our family. 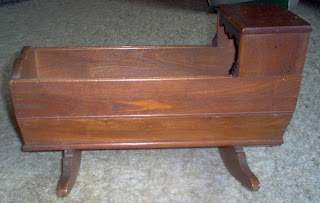 It has hand made nails and is constructed so the joins on the sides dont show the nails. I tried to take a photo of the carved initials in the bottom of the cradle, which are N. B. 1824. Whether that was the date it was made, or the date it was given, we dont know. But the carving of the initials seems a bit crude, & not quite in keeping with the workmanship involved in the constructing of the actual cradle. 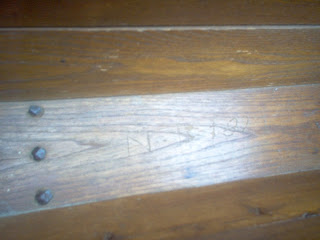 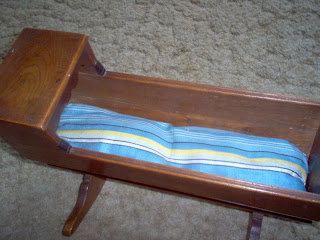 I can remember playing with it often, & loved it as a child. I didnt really have a doll that fit, but I used to put a Kewpie doll I had won at a Show in it, as the arms didnt move, so she appeared to fit.
I would love to know more about the cradle & who made it so many years ago. It seems incredible to think it has survived all these years, & it is interesting to ponder on how many little girls loved it.
My Grandmother told me she could remember playing with it when small, & she had 3 sisters, who no doubt played with it too. My Grandmother was the eldest girl, so I suppose that is how she came to have. My Mother was the first born granddaughter in the family, too.
When I was little my mother bought me my own little cot for my dolls. A neighbour child came & sat in the cot, & broke the slats in the bottom. I dont think it ever got repaired, & I remember I tied string across to make a base for it. I dont know what became of it later.
I gave our daughter plenty of dolls, cradles, cots, etc when she was a little girl, & she loved playing with her dolls, but completely grew out of them. I still have her childhood dolls stored away. She might sell them one day, I suppose. She also had a beautiful cane pram her grandmother gave her, but it was stolen, so we dont still have that.
When my Granddaughter was born, I made her doll beds, complete with sheet sets, crocheted quilts, blankets etc. I think they were all given away when they moved up here to live. She still has a little cane cradle I gave her with a little porcelain doll who sleeps in it.
I still have my mother's little old blue enamel teaset. She used to let me play with it, but I never let my daughter play with it, or my granddaughter. It has some chips & there are pieces missing, but I still love it, & love to think of the little girl who was my mother, playing with it, long ago.
I dont know what became of my teaset, but by then, they were plastic, & consequently didnt stand up to hard use!
I bought myself an old antique teaset while in New Zealand some years ago, & the man in the antique shop told me it was sold to him by an old lady who had no daughters, or granddaughters, & her daughter in law was not interested in it. She told him she had played it as a child, & loved it dearly but had no one to give it to. So now I have it to treasure.
Well it has been a strange, busy weekend.
Hope you have all had nice weekends.

Your old doll cradle is very interesting. I love the shape of the legs on it. I suppose you could find out where it was made from an antique dealer but sometimes the mystery is the best part.

What an absolute treasure to own, Meggie! I love a mystery.

Great doll cradles, I love how the vintage one is so long and thin - you just wouldn't find one with those dimensions nowadays. We must think along the same lines because I was toying (ha!) with the idea of folk art painting on the IKEA bed.

what lovely doll cradles. Thanks for sharing the story behind them.

Those are beautiful doll cradles. And such fond memories of your toys. You could study your genealogy to see who in your family was named NB.
I saved my daughter's dolls, but she gave them all away to her cousin. Now we have a bunch of miscellaneous toys which don't mean much to anybody, which will probably also be given away.

aren't old treasures wonderful! love the quilt you made too. I am still laughing at your husband and his leaf blower!! LOL

What a terrific story. The cradles are gorgeous.