This is the Tibouchina, loving this rain we are having.
It is nice & cool, so no complaints there, & it is also raining so hopefully some of the rain is going where it is most needed. There is almost an early wintery feeling to the air, yet normally, we get some hot weather right up until May.
Having said that, I suppose it will blister us next week. 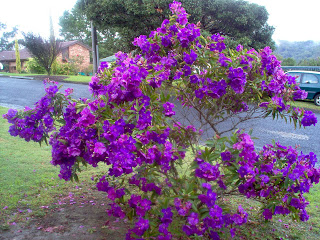 As a family, we decided not to go the whole Chocolate thing this year, & we are having a family dinner out, this evening.
SIL has been working all day, so he may not feel in party mode, but it wont really matter because I am sure Small Grandson wont want to linger too long after dinner.

When our children were small we took them out to dine regularly, & they soon learnt the rules about dining in public, and were usually really well behaved.

One of our favourite Restaraunts was a large Chinese establishment, & we became known to the staff there. They would always make a fuss of the children. As Son B became older, he decided he would rather dine on a Super Hamburger, from a place we passed on our way into the City. So we would stop & get him his Burger, & he would eat it in the car on the way into town.

The first time he did this, our waitress was shocked when we didnt order a meal for him, & she watched to see if he shared in ours. As he didnt, she rushed out with some Prawn Chips for him. Next time the same thing... I think she decided we must be torturing him or punishing him, as she brought out the chips straight away.

On the third visit he still hadnt finished his burger, so he remained in the car to finish it off, while we went ahead to the Restaraunt to order.
That time the waitress came up & looked at us in horror, & blurted out,
"Where's the kid?"
I am sure she thought we must have killed him off or something. We just smiled & said he was still coming, but I dont think she believed us. She kept peeping out at us, & was visibly relieved when he finally came in the door. And she rushed out with a plate of the chips again.

Of course, knowing what kids are like, we went ahead & got eggs for the grandchildren anyway. Even grownup kids still like their Easter eggs.
Posted by meggie at 4/07/2007 04:12:00 pm

lol! You'd have to wonder what they said out the back, the first time you didn't order for him.

I have had the Master taken from me for photographs with strange women ( hosties and shopkeepers )in Singapore. They drop everything for an anglo-looking baby :)

And they're so lovely.

This one started my day with a laugh!! I could just picture the scene in that restaurant. The waitress must have thought you'd starved your son to death when he didn't arrive with you!

I think it's good to take kids to restaurants once in awhile, even if they do have to eat a hamburger on the way there! Great story.

I loved your story. Those family memories are priceless.
Glad to hear you've had some rain. We could do with some down here too!