Today we went off to visit one of the busier Malls. I was not a keen starter for this excursion, but we must eat, therefore, we must shop.

I sat for a while waiting while GOM ferried one load of groceries to the car. As I sat watching the passing parade, I was very tempted to whip out my camera & take some of the more glaring 'obscenities' I saw in the way of "Fashion".

Of course, I realise I may well be someone's idea of a fasion disaster myself! But I try to stick to clothes that fit, & also provide a measure of disguise for the er... bumpy bits, so to say.

I do like to see people looking comfortable, & am glad the casual look is in fashion, as opposed to those distant days of whalebone, & tight laces.

I was pondering on the passage of fashions. I was young & fashion conscious in the era of long hair, paisley shirts for men, side burns for men, longer hair for men. Platform soled shoes- remember those! And mini skirts. How we used to freeze our legs down in the Southern City!!

And fake fur coats became the rage, short indeed, so really rather useless as warmers!

And one of worst abominations of men's fashion, the all time hideous, Crimpelene Safari Suit!

I shudder to recall those, & am happy to say, GOM never was seen in one, & wouldnt have wanted to.

One night my brother & I were at a very crowded party, & as we were both smokers in those days, of course we were puffing away for all we were worth.
Suddenly our nostrils were assailed by a terrible stench, & we looked down in horror to see a melting widening hole in a particularly hideous pale blue Crimpelene Safari suit. It looked something like the opening scene from Bonanza!! We were aghast. We debated telling the man. Then we made a bolt for it. We figured we had done the man a favour. He wouldnt have to appear in public in such a hideous garment ever again.

My Beloved Brother had a habit of holding his cigarette at a low level, & was guilty of doing another mischief to another suit in a very crowded hotel bar, on the day GOM & I were married. Again he slunk off so no one would suspect it was him. And as the smell arose, we all looked about in alarm, wondering what was on fire! Including the man in the burnt suit.
I am sure BB will dispute this, but he was a famous 'burner'. Of his bedclothes, & furniture, & once even his beard. My mother used to despair of him.

I couldnt find any pics with glaring fashion crimes, so instead I have posted a pic of my Doll's Teaset. Made in Japan, & the cups are such thin china you can almost see through them. Two of the cups have been mended, but it is still a joy to me. I love the little tureen, & the sauce or gravy boat. Fine china for discerning dolls. 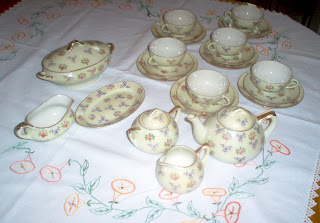 And this is another treasure from my Grandmother Christiana. It is a Royal Bayreuth vase, & is said to be quite valuable. I have loved it forever, & I love the hand painted cows, which unfortunately didnt photograph very well. I need some lessons in how to photograph china. 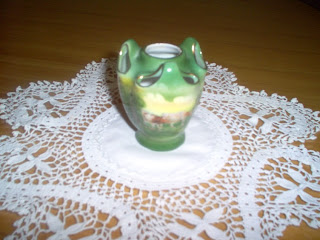 It is standing on a piece of Grandmother Florence's crochet.
After yesterday's enraged outburst I have calmed down, & though it is humid today, it is not too hot.

What a pretty tea set, I love the sprigged flower design.

The little tea set is so cute! As for fashion, I never got past long, straight, Hippie hair, so I can't really say much. Lol. Since retro is all the rage now, maybe people will think I'm going retro too. I can only hope.

Meggie
Guilty , as charged with some of those ' burning ' crimes -- That Crimplene suit coat was just amazing as it disappeared before my horrified eyes .However I seem to remember a certain sister of mine who had the habit of smoking two cigarettes at once quite often and who once or twice put long burn marks on window ledges , where the ciggie was left whilst the certain sister was doing other things HaHa
Very nice to see some of the 'treasures ' again also

Oh dear Megs, I can only sit and laugh out loud at your shenanigans!! You are absolutely priceless -- and such a talented writer -- you should write a memoir book.
Honey and Leo are just precious -- poo and all! :) I sit here, reading your last several posts, and I'm literally just howling with laughter. Sooo good for the soul! Your china pieces are absolutely lovely -- can you see that I'm green with envy??? :) And you and your brother were definitely "fire hazards on legs" !! ROFL Just priceless!!

Do you remember the rage for polyester and all things synthetic? I've swung completely in the other direction now---cotton and/or linen all the way...how about hairstyles? the beehive?! shudder! I'm also much more comfortable in comfortable, casual clothes. Lovely china....

Hi All, A benefit of age, is that you dont care so much about your appearance of fashionability!
I too go for cotton & comfort. Natural fibres are more comfortable.
Hmmm the beehive.. how we tortured our hair, withe backcombing! Which my Grandmother told me had been the fashion when she was a girl!

I am soooo glad I gave up smoking years ago. It was a filthy habit @ a slave master.

I don't know what Crimpelene is but I can imagine! I like to disguise my bumpy bits with comfortable clothes too, and all the while look at least 'enough in this decade' so that my children will tolerate being seen in my company out and about. It's a tough balancing act!

Crimpelene was a kind of polysester fabric, that was supposed to be a wonder fabric. It was awful, & didnt breathe at all, & really was just horrible. Safari suits were awful too, with horrible pleated jackets, & short sleeves on the jackets.
They are fun to mock now, & laugh about.

What a marvelous china collection you have. Is the Royal Bayreuth vase from the 1930s?

I roared when I read your anecdote about the safari suits. Oh, my; I'm glad those things are long out of style. Over here in the U.S. they were called "Leisure Suits", I believe, and they weren't complete without revealing half of a man's chest and a garish gold necklace of some ilk.