This a view from our balcony, from a different angle to most of the pictures I post, taken from the balcony. This is looking South, towards Sydney. It is often a good indicator of coming weather, such as storms, as we can see them rolling up between the hills. 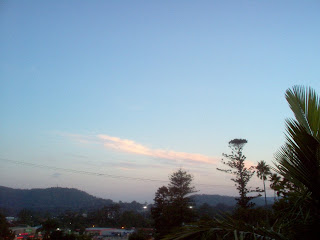 And down in the lower part of the pic, are the ugly signs of civilisation. The Hungry Jacks angry red neon lights. The Petrol station, the Bottle Shop, the Car wash. I guess they are modern necessities of living. Hungry Jacks I would not regard as a necessity for anything, living or dead. However that is just my opinion, & perhaps I may be in trouble for stating that.

Thinking on about the Real Women Meme that has been doing the blogrounds, has made me think a lot about the men in our lives.

I have been thinking about the differing perspectives men seem to have, compared to the ways women view things.

Having been married for almost 41 years to the same man, you might think I know him. I know a lot about him, but there are places he never shows to anyone. Facts about his life he will never discuss. The reefs & coves of his soul, he shows to noone.

I suppose we all have those secret bays, where we just hide away. I do think women tend to discuss things a lot more than men do. Our SIL seems, in a lot of ways to be quite similar to GOM. He has his 'nerve' patches, my daughter says she is not allowed to reach. She is more like me, & inclined to talk things over to rationalise them, & work through them.

I read Joke's posts about how he cares for TFBHM, & how he respects her, when she is stressed. I see a lot of similarities in the way GOM treats me these days. And perhaps, has for some time.

He used to have Wednesdays off when he was fist working as Manager in a Hotel over here & I was working full time. He used to come & collect me for lunch. He would bring lunch & we would drive off somewhere to quielty share it together. My friends always thought how romantic, how lovely, he was.And he was, & he would do the ironing for me, & prepare a lovely meal for the evening. Perfection in a husband.

But, I hope some of you will understand, I sometimes resented that. I felt my job was a haven somehow, & I wanted it seperate from my home life. Sad but true. It wasnt that I didnt appreciate his thoughtfulness, but I just felt a little stifled, perhaps. I wanted some space & time out, from my domestic life. It didnt mean I didnt love him, or was tired of him. It just meant I felt I had an identity for myself. We had spent so much time working together, it was nice to have some space.

And now that he is retired, he has taken over the rearrangement of the pantry, & the decisions on what to buy for groceries. He vaccuums for me, hangs the washing, collects & folds it, when it is dry. He is a gem. Of course there are the Garden Vandal moments, when he is anything but a gem, when he rips out my herbs. But on the whole he is a gem, & a kind considerate man.

But there are times when I feel a little stifled. Feel a little space wouldnt hurt. Perverse woman that I am.

He is perverse too. He refused to buy a near new wheelbarrow, for $6 at a garage sale. I couldnt believe him. And while I realise a wheelbarrow wouldnt have fixed this dilemma, I cant understand his economic thinking at times!

As you may recall we have been having further troubles with our drainage due to neighbour privet.
The drains have been cleared but it seems the neighbour privet, which had supposedly been poisoned, has regrown from the stump.

So, off goes GOM, he hires a chainsaw, at no small cost, buys various poison potions to pour onto neighbour privet. He dons the face mask, & zooms off into neighbour garden, & the rip roaring of the chain saw can be heard! He carves great swathes into the privet stump. And then flies off to return the hired chainsaw. He has applies the poison potions to the stump. Hopefully it will die this time!

I cant help but feel neighbour should have been paying for all this chainsawing & poisoning. But GOM 'doesnt like to bother him'. Strange, perverse man.
Posted by meggie at 4/13/2007 08:22:00 am

All men are strange, no matter how nice and kind they are. Every woman, or at least every married woman knows it. To be fair, I think they find us strange too. It's a wonder any marriages last. We will be married 43 years this July. I can hardly believe it's been that long.

Men and women are just wired differently. Mine is analytical and logical and taciturn---unless the subject is golf, or rockets, or politics---but taciturn on the things I want to talk about! But he is kind and considerate and very clever....and patient with his illogical wife.

I can empathise, Meggie. My husband thinks very differently to me, too. So for big long chats, I talk to my friends. We understand each other!

I can empathise with the stifled feeling. I start work early so get home early. My son loves playing with his friends at childcare so I usually have an hour or so to myself before I pick him up. That hour or so has become precious alone time.

Now my partner has been on holidays for the past two weeks and it is great to have him home but I do feel like I'm never alone and it is stifling!

I'm smiling at this post Meggie. When I worked full time, and mine had a day off he would visit me at lunch and do something similar, and much as I love him and appreciated the gesture, I resented it deep down. That was my territory, and how dare he move in on it. My insecurities perhaps..?
I am unable to do the same for him now I don't work, because of the job he does, yet I know if I did I would be welcomed with open arms and shown around and introduced..
Mine doesn't think twice about buying a new car, and yet has a garage full of crap that he NEEDS, and yet isn't worth the storage space IMHO !
Won't go out if it's cold or wet, unless it's to golf...
I guess that's why we love 'em. Next year will be our 40th..!
hugs
xx

I could so empathise with the sentiments in this post Meggie ... Over the years .. all 27 nearly 28 .. I have often felt that if I'd committed murder I'd be out on parole now ... But something keeps me here ... Can't for the life of me think what ... probably because the real women meme is occupying most of the functioning grey matter ....

I'm smiling too. 32 years next month with the same good-looking boy from high school. I understand your feelings well, my husband is a "fixer"... sometimes things don't need fixing but maybe we could talk it out... he's an engineer. Enough said. I love him dearly. Life is Good!

So we're weird and taciturn.

Seriously, while I am bewildered by the way women think -- not that I don't find it fascinating -- I think eventually the best marriages hone the similarities and differences into a sort of symbiotic something that completes and complements and becomes greater than the sum of its parts.