This morning's fluffy clouds.... will they later thicken up, & produce rain... I wonder. 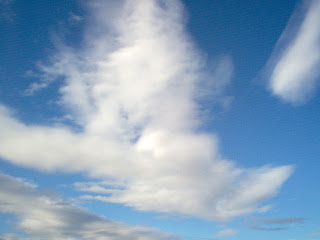 And last evening's little red anger flares- though perhaps they denoted fine weather for today. And perhaps my anger is colouring the meaning of the picture, for me. 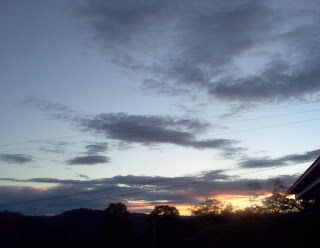 I just want to have a little rant! I changed plans for the computer. I got one that included, Broadband, (a version of which my friend calls 'Fraudband' which would seem a very adequate title for what I have.) and it has a mobile phone plan included.
Yes, they assured me. You can bring your current phone number with you. No problem. In someone elses name? No problem. We can change that. Yes it will work, No problem.
Now my Granddaughter, gave me her old mobile, or as some call it 'cell' phone. She got me a new number, & gave me credits, which have lasted me months, as I rarely used the phone, but have found it very handy to have, nonetheless. It was a prepaid phone, so I never suspected it could be a problem. Hah!! How ignorant am I!!
When I put the new sim card into the phone- yes, I have learnt a whole new language!- no joy with service. How puzzling! So I begin the hopeless round of phone calls, to try to find out who what or how. After screaming at the automated phone answering service, trying to make a computer understand my accent.. or something, I am finally put on further lengthy 'holds', until finally a real live person comes onto the phone.
She is really short, sharp & rather rude- to my ear anyway. She finally tells me I will have to phone the previous company & get the phone checked out for a lock on it. OK. I spend another hour or so, waiting on line with ghastly music grating upon my soul, who craves calm, & peace. Another person comes on eventually, living I think, ....but wouldn't guarantee. A heavily accented voice, with some improbable name like Haireee Turrrrnerrrrr.
Haireeee proceeds to tell me he needs to speak to my granddaughter, who of course is not here. Foiled again.
So, I decide I will use GOM's old steam version of a mobile, which is in pristine condition, due to his hardly ever having used it, & when he did, almost always cutting himself off. I got it for him to use to alert me to traffic jams, & delays when he worked a long way from home.
So, I charge up the battery, insert the sim card, & try to get mobile again. No such luck. So, once more I begin the long wearying task of phoning phone companies. OMG it is enough to turn you grey! I makes me want to beat my head against the bricks outside! What rotten thing in my past is making me now pay in Karma? Must learn to be patient, must learn not to raise blood pressure.
I finally get someone , very pleasant, who tells me there is no lock on this phone, but she cannot help me.... she will put me through to the 'prepaid' department. Where I get another extremely heavily accented person... who is so accented I can barely understand a word they utter...could this be India I am speaking with??? Bearing in mind, it never does to piss off people on the other end of the 'help line' - oh hahahahahaha, what a misnomer!!! I try to patiently explain the problem. He snarls impatiently at me, & guess what... after lengthy questions, & me reeeling off hundreds of numbers, the phone is now rendered utterly dead & useless... How did he do that!??
And I swear, I never let on that he cheesed me off to the max, I was polite, I only begged his pardon about 8 times... I am left minus a phone, but still paying for one, of course.
And the Fraudband crawls along, because I have used my quota, in the first week or something ludicrous. One cheery soul told me in every other country in the world, what we call Broadband, is their normal speed! How come we lag so seriously behind...
Could it be that Telstra has a strangle hold on things.
And yet... I am 'lucky'. Friends have much worse tales to tell, & have had to resort to the Ombudsman to get some sort of satisfaction... which is still not forthcoming.
No wonder I am grumpy!!GGGGGRRRRR!!

We had a similar problem with our computer setup which is via satelite. They always seemed to think my computer-illiterate husband knew more than I did. We suggested that it might be a physical wire on our roof and after hours and hours and people and people on the phone, they sent somebody out (actually a former Grade 3 sutdent of mine) who replaced the faulty wire on our roof. Its' the same story the world over. And by the way, you probably were talking to somebody in India.

I had problems getting my wireless network set up (I wrote ad nauseum on my blog about it) and yes, I did talk to India several times. I'm betting that you did also. It's a nightmare at times but once it's up and running, it seems that we are able to forget the hassles. Good luck! :)

You have every right to be grumpy! Bless your heart! I hate, hate, hate those automated voices that you have to go through to finally talk to a human! I got to where I would just shriek and scream at the one for our phone service and it would put me through to a person (at last!)...hours upon hours on the phone...so I do know and my heart goes out to you! We went through months with the phone service people (who do our internet/modem stuff) saying it was the router people...the router people (in India, I'm sure) saying it was the modem/phone company...arghhhhhhhh! Finally, we bought a new router...wasn't the problem, apparently....and then FINALLY (thought I would have to promise the first grandchild or something) got a new modem out of the phone company....now everything works! And they put us through #*+# for months!!! Such great service...ha...but since I cut...ahem...the cable wire while gardening and don't want them to destroy my garden to fix it...I can only...partially...blame myself for having to stick with the phone company...

Whew...I just had my own rant! Sorry!

oh Meggie.. my heart is with you.... I had a similar story but minus the mobile. (thank goodness). I inisisted on speaking to someone of a higher level. Couldn't do but he did go and question. They told me they did not support Windows ME... yet on their website it states it does. I had also printed that page out, when we were deciding where t go. So told them they had better update things. We were even without a phone for 7 days... hand in there Believe me ...ITS ALL WORTH IT truly..... aubirdwoman

And this, they tell us, is progress?!

Wow, this is the first time I've come across your blog and just let me say that I hate them too! They're the bane of society and you spend an hour just pressing buttons into their automated voice boxes and sometimes they don't even have the option you're looking for.

A tip I have is to find out what's the normal operator number in your country. In my home country it's 0 so when you press 0 it normally goes straight to a real person and you can scream at them for whatever reason. Another tip is to pretend you're whoever it is you need to be, just remember address details and birthday, all that sort of thing. Hope that helps.

Do keep blogging, your blog is really a pleasure to find.

Very frustrating story which makes me think that we are not alone in feeling this way because there's an ad on UK tv at the moment for 'Churchill Insurance' where there are crowds of people asking questions like...Will you put us on hold for ages with piped music? Will we get to talk to a real person? Will our call be directed abroad? etc, etc. So at least one company is trying to serve its customers without all that frustration. Let's hope others follow suit.

Sorry to hear you had such a bad experience. I'm a 2nd level internet helpdesk tech and I hope it wasn't our company that gave you such a hard time!

I do admit, I hate hate hate our voice phone system. I'd rather have the old push the number to choose the department system.

Understand your frustration Meggie. I too have been known to scream profanities and roar like a banshee at an inanimate object(phone) ...

I have taken to looking on it as character building moments! My character is so BIG now I'm in danger of falling off my pedestal!

What pedestal? THEY mutter darkly ....

I hear you and feel your pain. Without going into boring details we've had our share of tech-helpline horror stories. Rant away... it helps!

Ah, Meggie; I'm sorry. I feel for you. Frustration after frustration, it sounds like.

We have broadband and wireless this and that here, but as I've often told my husband, if he dropped dead all of the routers and this and that would gradually drop dead along with him. Pretty soon I'd be back to having wires strung all over the house, and it would look just like the ductwork scene in the movie Brazil.

Tin cans with a string between them. That's the way to go.