This pic was taken in about 1963, & shows my Best Friend J, then Meggie on the left of the photo, as you look at it. 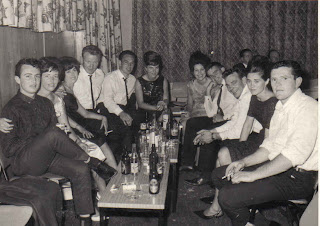 As you may guess, from looking at the pic, a good time was had by all. I think most of the lads were Aussies, & most of the girls were Kiwis. One couple even got married. The young men were doing their OSE (over seas experience) in New Zealand & were a nice bunch of young people. This pic was taken in an 'illegal' nightclub. There were plenty of those 'nightclubs' about in those days, & you had to know someone who knew someone to gain admittance.

As you may note, I was a smoker in those days, as most of this group were. I was a bad smoker, & smoked far too many cigarettes.

Once I got married, I started my long journey to quitting. GOM has never smoked, & though his parents & sister all did, he said he just couldnt understand the attraction. He never minded my smoking, in fact he was most tolerant of the awful habit.

Many is the night in the Inner City Hotel, a slightly chubby naked man could have been seen streaking down the stairs & into the deserted Hotel corridor, to get cigarettes for Meggie, from the cigarette machine. The bars were well closed of course.

Son B developed asthma, but still I didnt really connect the smoking to damage to him. (Or didn't want to) Asthma was in my family, on both my mother's family and my father's.


But I was conscious of how unattractive smoking really was, & so began my attempt to quit the habit.
My first attack was Acupuncture. It was the latest fad to hit town, & of course the Chinese were the experts, so off I went to see a Chinese Acupuncturist.

His "Rooms" were in his suburban house. His wife, who seemed to speak some form of English with which I was unfamiliar- & that cut both ways it seemed- was the receptionist. His small & numerous children were entertainment provided for the lengthy wait one had in the lounge room of his house.

The non understandable wife removed wads of dollars from your person, & you were seated in the 'waiting room'. As I sat & watched the children perform death defying acts of climbing the curtains up to the rods, & plummeting down onto their heads, I could feel the ever increasing need for the soothing solace of a cigarette.

Finally after one particularly piercing screaming session from one small wounded child I was ushered onto a chair in the passage. Here Mr Acupuncturist proceeded to stab me with various needles about my person. And returned from time to time to twiddle them. And finally burnt something on the needles, as far as I could tell. And then I was declared cured! And reeled out to the car to speed home, somewhat shattered by the nerve wracking experience of the Chinese Children's apparent death wishes.


In the comfort & relative sanity of my own home, I managed to wait at least an hour, before scrabbling frantically for a cigarette to soothe & hopefully erase the memory of wounded children.

My next attack was Acupuncture from my GP. He had just returned from a stint in Australia, learning the technique & was adamant that it was a new & painless cure for the smoking habit. Of 8 people he treated, I was one of the ones who didnt quit. He told me he felt perhaps I didnt want to quit. And I admitted he may be right. At that point I felt being a slim smoker was preferrable to being a fat non-smoker.

But still it niggled in my mind, I didnt really want to smoke, & I remained determined to try to stop.
So off I went to try Hypnosis.

This session was performed in a somewhat musty old room, with a horrible 'gutless' chair, & really, relaxing was quite hard, as the chair seemed to be showing it's 'ribs' or something, & lumps of stuffing had settled into extremely unlikely places making comfort unattainable. However I was assured I had indeed been hypnosed, & would not want to smoke again. Much money changed hands one more time.

And off I went to meet GOM in the bar of the Hotel. One of our friends was there, & he knew I was on the road to giving up cigarettes.
"So how do you feel that things are going?" he asked me, casually holding out a packet of cigarettes.
"Oh very well" replies Meggie, absentmindedly taking a cigarette & the proffered light. And wondered why they all burst out laughing.

Over the next few years I periodically retried Acupuncture, Hypnosis, Hynosis tapes, & finally I managed to give up for a week.

And along comes a crisis, & bingo! I am smoking again. Damn!

And you know you are a manic addict, when you find yourself siezing your child by the throat to force them to tell you where they hid your cigarettes, which you had begged them not to tell you, no matter what.

I eventually got a really really bad dose of flu, just as I was starting a new job, as a receptionist. I wanted the job so much, & I felt like death. I rushed off at lunchtime to see my Doctor. Who had been begging me to just 'cut down'. But I seem to be an all or nothing person, & couldnt cut down.

When he saw how ill I was he prescribed the nicotine Gum for stopping smoking, as well as some antibiotics. I rushed off the Chemist to fill the script, & into the Newsagents to buy cigarettes. A small voice made me buy Lifesavers Mints instead, & so began the beginning of the end.

I used the Nicotine gum for far longer than I wanted, but at least it stopped the smoking, & all the associated habits & rituals, & the unbearable cravings. But of course I became hooked on the gum. I just couldnt kick that habit.

By this time the Nicotine patches had come onto the market, but only on prescription. So I begged my GP to prescribe those for me. I think he was really happy I had stopped smoking, even if I was on the gum, & he was doubtful the patches would work.

They did, & I only had the one complete course & I have never smoked since. For 19 years I have never wanted to smoke, & am so glad I finally got cured.

I spoke to a man who had been a heroin addict. He had given up the heroin, but just could not stop smoking, & he swore the addiction to nicotine was worse than heroin.

The words of a song come to me when I think about addiction.
"Sometimes the drug chooses you"

Good for you for kicking the habit! I can't imagine how difficult it must have been, particularly with small daredevil children wandering around the acupuncturist's.

In the photo you look like you're having fun. I wonder what kind of lives the rest of the people in it have been having?

One of my earliest memories is being in a car with someone who was smoking and having an asthma attack. It certainly scarred me because smoking has never had any appeal at all!
Lucky you finally found the means to stop.

Your post with this music is so nice. I'm sure you will finally STOP smoking.
I stopped when my first son was born -31 years ago- and now I'm sure that you will be in the club of the ex too.
ciao ciao

I'm glad you were able to quit. My husband quit in 1970 and I was sooo glad. One of my kids still smokes and the rest if the family is always on her case to quit. She did once for a year but as in your case, a crisis and she started again.

You all look so glamourous in the illegal nightclub...I love B&W photos.

I could never understand why people couldn't quit smoking, after all I did it dozens of times..!
Then on New Years Eve 20 years ago, we were all offereing up our resolutions. I said I won't smoke after tonight..! When the laughter died down, several other said they would join me. I did it, I quit. Cold Turkey too. I don't know why that time was different. I went from a svelte smoker to a fat non~smoker, and now if they would just come up with a candy 'patch' I'd be all set..

Good for you, Meggie!! No matter how many times you tried, the bottom line is that you finally succeeded. Smoking really is one of the most addictive things anyone can do. You've added years back onto your life.

Congratulations on your 19 year smoke-free anniversary~ Good for you!! Love the musical accompaniment, BTW...

Meggie !
What an *interesting* photo - just look at the people .. and I believe DB Beer is STILL popular in NZ ;)

The couple closest you on the left though, she with her arm around he ... are they siblings ?

Look at the mouth, the nose, the eyebrows, eyes, jawline etc. Doppelgangers. Even the slight upturn of the lip, the mimic each other in every way....

First of all, I love the music here on your blog! I enjoyed reading all your stories posted, about the camel (I often babysit grands so I can relate) and stopping smoking! I'm not a smoker but I do understand how powerful the addiction is. Congrats on making the break and remaining smoke-free all this time. The photo reminds me of my old days, the fashions, etc.

H & B, No they were no relation! I never noticed the similarity until you pointed it out!
The couple on the right were married, but we lost touch with all of them, so I dont know where any of them are now.
And yes, DB is still a very popular beer in NZ.

Meggie ,
DB Export is still my beer of choice HaHa . There is not the same ' Brand Loyalty' there used to be though , especially amongst the younger people - anything goes .

I hear you, Meggie. I'm an ex-smoker too! Quitting was never as bad for me though, but I still want one when an emotional crisis comes around!