This post is a mish mash of various thoughts flitting about on this Easter Sunday.
This is my one remaining bloom of a camelia. Yesterday there were 4 but they have gone with the rain. Of course there are many more buds to open. 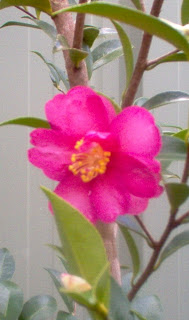 And this is a lone rose, growing in a pot, & is one of only 2 which have survived since we moved up here to live. And how I wish I had a better camera, the better to get clearer photos, instead of my fuzzies. 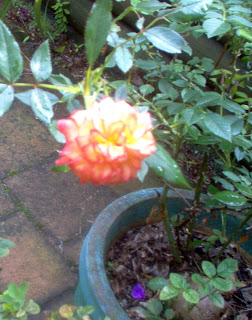 And this is a dead giveaway about my messy mind at present.
I cannot seem to settle to anything, have pieces of patchwork lying about on the sewing machine cabinet. A project I started with such enthusiasm, & then made an error, & just lost interest even though I frog stitched the mistakes. 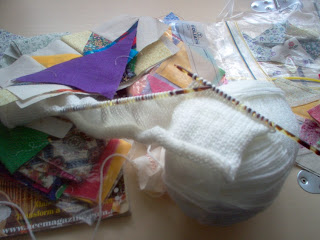 And yesterday I thought to design a cardigan for a Teddy, so that is the latest project.... it may, or may not, get finished.
I love knitting with these tortoise shell kniting needles. I found them in a garage sale, a bundle of patterns & needles. The knitter had died & her daughter laughingly told me she couldnt knit & was unlikely to ever want to. I felt sad to think her mother had been such a keen knitter- there were lots needles, & the patterns attested to her love of knitting, & she must have done a lot for the grandchildren, as there were lots of childrens patterns. I paid $1 for all the needles, & crochet hooks, & she pressed the patterns on me also, free of charge.
I used to love knitting when my children were small, & spent many happy hours in the evenings with my knitting for the winter. (which was lucky, because GOM was most often away at work- had I been a different person, perhaps I would have found a lover to spend my evenings with) Hand knitted clothes went out of vogue, though I did knit for both grandchildren. And lots of dolls.
I have been playing about on the blog this morning, getting some music onto the page. I had been listening to music on various sites, so decided to try to get some for myself.
I love Janis Ian, & I found a song of hers I really like, so duly posted it onto the blog. It was a live track, & I found I didnt like it. I am a bit fussy like that, I find I dont like live, raw music, of my favourite songs. I like the nice studio sanitised version with all the imperfections cleaned off. If I wanted noises of people clapping & whistling I could go to the concert. But I dont. I just want the pure technical perfection that a studio recorded work affords. I am sure there will be lots of critics about this idea.
And it is not to say I dont enjoy live performances. Our outing last evening was filled with lovely music from a lone man, whose voice held the audience quite transfixed. When he sang the idle chatter lulled to silence & even the children seemed to appreciate his performance.
And I have been reminiscing in my mind, about 'old times. Perhaps brought about by remembrance of my Grandmother Christiana, who died on a Good Friday.
When we were children, the only time we had chocolate was at Easter, Christmas & perhaps a birthday. A whole box of chocolates was such a treat.
And chickens, as Helen reminded me, were only on the menu when one stopped laying! And as a child I detested chicken. I knew where it had come from & that really bothered me. But also, the texture of the poor old worn out layer was similar to our gumboots. And the flavour was not much more to my taste either.
And I never really understood the whole 'wishbone' magic.... it smacked of lies to me. I can still see the poor bone lying on the kitchen windowsill to dry out. And the wishes never came true!
It seems a great pity in a lot of respects, that there really are no 'treats' left out there as far as food goes. We can afford ham any time of the year- it used to be so exciting to look forward to it for Xmas time. And as for Roast Turkey... well, it can be had any time too. Or prawns, or even Lobster, although that might involve a bank loan &/or possible debt for months.
Children today dont have those seasonal treats to look forward to, & the value & joy in them, is diminished by their casual availability, I feel.
If I stop to think about it, what do children have to look forward to, in the way of special treats?
Disgusting hamburgers, or fat soaked potato chips?
I used to make our children hamburgers at home when they were young, & they loved them, because they could assemble them themselves, & put whatever they liked into them- beetroot, pineapple, sprouts, lettuce, orange slices, -all with a homemade pattie & plenty of sauce.
I have never been a hamburger eater, either homemade or the bought variety. Just dont like them. I consider myself lucky! But at least with homemade ones I knew what was in them. But our son did love his Super Burgers from the Burger Bunker, on the way into the city. The Bunker was made in the form of a huge hamburger, & half the fun of it was the wonderfully realistic looking bun it was built as, complete with fillings.
It has gone now, & our son was disappointed to see it gone, the last time we were in Christchurch, which was for his Grandmother's funeral.

I identify with a few things here.
When Mum died I gave her knitting bag, complete with needles, patterns and oddments of wool to a lady I worked with. She was very involved with her church and they had knitting circles to make items for charity and the needy etc. I rec'd a lovley letter from them thanking me which made it seem worth while.
I too like the santised perfect versions of most music rather than the unplugged variety. Not always, but most times.
I also agree about the treats, it's Christmas every day now. None of the excitement as special occasions draw near, as you wait for a special treat. It's too bad we are so overindulged, especially when people in other parts of the world don't have enough to eat.
Happy Easter to you and your family.
xx

Love the music you finally chose. The picture of the camillia i beautiful too.
I sometimes wonder what will become of all my arts & crafty stuff when I die - will my needles and my FQs end up in a garage sale to inspire others who buy them?

Oh that was a lovely surprise, your music added another dimension as I read.
I used to knit such a lot like my late Mum before me, but these days have no need except for the occasonal baby knitting for a young friend. It's areally relaxing theraputic thing to do.

My MIL was an expert knitter and was known to rip out the entire back of an adult sized sweater because one stitch was on backwards near the beginning. I like to knit but my standards are much lower! Lol.

Happy Easter, Meggie, GOM, Honey and Leo!!! LOVE your music! Even have my sister lurking about your site, and she fell in love with the music (she's not a blogger). :D Your flowers are gorgeous!

Hope you had a happy easter meggie :)

I never learned to knit but I do have a huge (larger than queen size) multi-coloured blanket that I crocheted. I think I've forgotten how to do it now though. I made that years ago.

lol - my word verification is dullw

Something tells me that if the garage sale lady's mother knew that you have her knitting supplies, she'd be quite pleased. One thing most of us don't want is for the things we enjoyed and cherished to go to waste.

Sheila, I do think that your gifts were appreciated, & it was nice to be notified.
Soozii, hope your Easter weekend was not too stressful for you. I hope you get more time to enjoy your FQ's.
Ali, My Mum used to knit beautifully, & learned to crochet with me, & did lovely work for my daughter.
Joyce, My MIL never used to knit much, & I was happy that I had some talent she could admire!Goodness knows she had enough she didnt approve of!!
Angie, I am glad you like the music, I am a sucker for classical, & anything guitar.
Caramaena, I think it is a bit like riding a bike, it comes back really quickly! It is very relaxing.
Tanya, I agonised over my mother's things, & there are still some that are aches. I have told my kids they are NOT to worry over my things, -if they have no use, dont worry!