I'm Only Playing With It!

This is Leo, with a prized possession. One of GOM's socks. He doesnt actually chew them the shreds now, he just plays with them, & loves to be chased for retrieval. 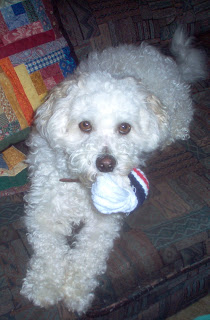 The weather has been nice, love the cooler mornings, & at nights, can even bear to have the covers on, in bed

This is a pic of a small all porcelain doll I made a good long time ago. I made the her clothes, back in the days when I could be bothered fiddling about doing heirloom sewing. Blue flames could sometimes be seen clouding my head while I worked in Heirloom sewing. Patience is a virtue I rather lack, at times. I purchased the little Battenburg work brolly, & have yet to fill her basket with flowers. Dolls took a back seat once I discovered the joys of quilting. 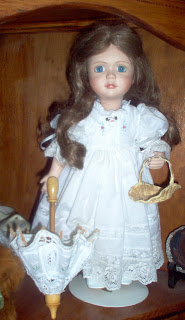 And this very nearsighted little Ted is a reject from yesterday's garage sales. He was sitting forlornly on a table all neglected, so he came home with me. I also scored several really good books for peanuts, so am looking forward to spending some good reading time. My first Bill Bryson, & I am told he is a good laugh. Some nice grizzly murders to intrigue! 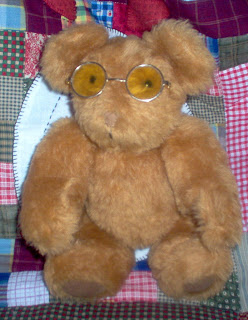 *************
Do you remember your first attempts to ride a bike? I certainly do, & they were not pleasant at all. I dont know why, but I was older than usual I think, & my brother was learning about the same time.
The neighbours who owned the farm next door, had 3 daughters, who had various suitors come to visit at times.
My brother & I were friendly with the son, who was between our ages, the girls all being older. One day one of the 'boyfriends' decided it was time we learned to ride a bicycle. I was chosen to make the first run.
It was a boys bike, & in fact, full size, as I recall. Mounting the wretched thing was quite difficult, & the bar made it almost impossible to dismount with any dignity at all.
I was given several tries at mounting & dismounting, & then shoved off & away down the paddock. Being a paddock used for grazing cows, & at times horses, It was lumpy bumpy & rugged.
Off I went at terrifying speed downhill, legs flying uncontrollably out the sides as the peddles whizzed round! I had no idea how to stop the thing, & knew I was in for hurt! And I was a coward, & did not take well to pain.
The roaring of laughter behind me was awful, & added to my humiliation. I was gathering speed, & was terrified I would end up at the bottom of the paddock & might fly into the water trough. Or over the rails of the cattle yard.
Which end was going to be worse??. Horror, I noticed a huge Scotch Thistle growing in the path of the speeding bike, so I did my best to steer into it.
And succeeded. Close encounters with Scotch Thistles are never pleasant! They are extremely prickly & hurt like hell. And the near rape of my pubic bone from the bar on the bicycle added to the pain factor X 10!
Howls & shouts of laughter came from all watchers, & I just lay very still in the midst of the thistle, smarting all over. And smarting inwardly from humiliation.
I extracted myself gingerly from the huge thistle, & limped off home across the paddock. I didnt even bother to try to pick the bike up, but I pretended the hysterical noises I was making were laughter, as I slunk off home, in pain & humiliation.
It was a few weeks before I could face any of the merciless teasers again. And they were all male, & thought it a hell of joke. Needless to say, it was another good while before I attempted to learn to ride a bike again.
I think my brother fared almost as badly as I did. He has vivid memories of our mother, puce of face, threatening him with a hiding if he didnt learn to ride her bike. He tells me I went to his defence, & did my best to teach him. I have really forgotten most of that incident, but of course will never forget my first 'lesson'. I suppose we never do.
My brother did learn to ride a bike, & made good pocket money with a paper round, which was full of rich stories to be told. He should start a blog. He could have you all in stitches!

Just reading that made me hurt...!
I don't remember learning to ride a bike, but I remember roller skating and going down a hill and losing control and flying across the road at the bottom. How I wasn't killed I'll never know.

Sheila, I never did learn to roller skate! Ouch!

if that had been my first ride on a bike i would never have ridden again. I have never ridden a boys bike because of the bar. I don't know why they made them like that.

Cynthia, I have theories why they put the bar there, but wont mention it on here!! haha.

Ah, what charming young men those were. I'm sure they grew up to be warm, supportive husbands.

My first attempt at riding a bike came when I was in my twenties, and ended abruptly in a ditch filled with wild blackberries. To make matters worse, a five-year-old went right past me riding quite competently.

my cousins put me on their bike and pushed me down a hill. I didn't know how to stop so just held on till I got the bottom and then fell off. I was scared but at least I stayed on down the steep hill and I did try again but on flat ground. My mother wouldn't allow me to have a bike as she was afraid I would get hurt. LOL

Ouch! Ouch! Ouch! That hurts me! It took me a really long time to get up the courage to start riding a bike. I remember that my younger sister learing befor I did!

That's so funny to see Leo with the sock! Ours loves to steal stray Mr. B socks too! He runs through the house with them like he has some fabulous prize. The dirty ones are his favorites! (EW!)

I remember being 'taught' to ride.
If you can call it that.

Probably no surprise i'm still no fan of bikes....

I can't actually remember learning to ride a bike, I guess there were no painful memories. I do remember thinking that it was the greatest freedom to be able to take my bike and ride for miles and miles everyday during the summers.

Your porcelain doll is beautiful and the clothing is absolutely gorgeous. What a talent you have for heirloom sewing.

Give Leo a pat on the head for me - he is just so cute and photogenic.

Meggie ,
In fact Mary got very angry with me because I had told her I could ride her bike & actually could not when the time came -- She warned me beforehand that she would give me a ' come along ' if I could not ride the thing HaHa You did indeed save me , more or less . That bike was a full size & heavy one too . It had been modified by our uncle J from a mans bike to a womans -- He had cut and repositioned the bar . Can you remember Mary riding it to work until she got the old Morris 8 ?
Some years later I rode it to town , locked it , but had it stolen while I was at the movies -- Mary was very good about it though.

Hi Meggie, I just love your Doll and teddy.My Mum was old fashioned only the boys were allowed to ride bikes.but did have roller skates and had a few falls from them.,

I apologise on behalf of Scotland. Ouch!

I love the way you described "the reefs and coves of his soul". Very telling.

The teddy is a lucky boy to have gone home with you... when I was a girl there were large scabs on both my knees all summer each year from spills off the bike! Great post, as always.

Meggie , Me again . I meant to say what a wonderful looking teddy he is , the doll I know already , also lovely .
Do you remember the story of our uncles attempting to teach our grandfather to ride a bike ?? The steep and winding roads where they lived were metalled and mud , more or less, with a clif face on one side and a terrifying drop into the river on the other . The rotten beggars launched the poor old fellow off down the hill at great speed and watched with much amusement and hilarity as the bike picked up speed , and yet more speed and with our grandfather yelling and probably in terror ,sailed off over the edge of the road and down into the bushes and finally the river below . After listening to the curses and bellowing from below the uncles ran off into the bush & hid for the day , but our grandfather had the last laugh as they eventually had to come creeping home and I think got fairly warm rear ends from our battered, bruised and less than amused grandfather. He never tried bike riding again , and they of course had to climb down into the river and retrieve the remains of the bike

Henri, I had forgotten that story, but do now recall it. They were daredevil boys, our Uncles!