In Search of Our Roots.

In 1996, my Beloved Brother & I set out to visit the area our Maternal Grandfather came from, & the location where he was born, in New South Wales, Australia.

He had often spoken of Eden, & told us many stories of Australia when we were children, including tales of Bunyips & also he used to tell us not to linger in the toilet for too long, or a snake would come to bite our bottoms! I lived in terror for years.


I say he was born in Eden, but my brother is sure he was born in Wonboyn, which is very close to Eden. He had certainly lived & worked around Eden, which was largely a fishing town. If you were not a fisherman, you were a timber worker. And he was a timber worker, but of course knew about the fishing, & had often told our mother & her brothers about the stories of the fishing, & the Killers of Eden.

I was lucky to have previously visited Eden with our mother & one of her Aussie cousins. My BB was keen to visit it, & see it for himself. Our mother had a very old postcard of the wharf at Eden, & we were surprised at how little it had changed in all those years, since her grandmother had posted it to her son.

My BB & I got a Rental car, which we picked up & I drove initially. We decided to take the coast road down the State, & it was quite pleasant weather. We were a little later getting on the road than we had planned, but set sail in great style, full of anticipation. Fortunately we get along very well, & we did have many laughs along the way.


We stayed at a somewhat disastrous Motel the first night of our trip. It was in Bateman's Bay, which is counted as a 'desirable holiday destination'. I wont go into all the details, but the unit we were assigned had no airconditioning, & a large squeaky ceiling fan stirred the hot air, should we need cooling. It was a very basic unit, but had tea/coffee making facilities, & a bathroom.

The bathroom must have had some sort of drainage problem. It seemed ok on first inspection. But the first time we used the toilet, the stench that rose out of the room was unbelievable. It smelt as if a thousand other people's excrescences were just waiting below, to release their foul odours upon our night air. It became suffocating. We flung the window open, we turned the fan onto high, hoping to blow the reeking rotten stench out of the unit. All to no avail. As we tossed & turned in the fetid air, & fitfully dozed, I heard my brother declare "It wasnt me! I am a Clean Man!"


We had to trudge over the highway to a Club to find food, & dodge flying traffic to get back to the stinking motel. We couldnt wait to leave the following morning, & chose not to remain for any sort of breakfast. It has left us with a permant dislike of Bateman's Bay, which is probably unfair, but there you go.


On we travelled down to Eden, where we found a nice Motel, close to a Club. We were greatly amused to see signs in our unit asking that fishermen please not clean their catch in the units, but go to the area provided. We liked Eden, we thought it a pretty little place, & we went down to the Wharf area to see for ourselves the postcard picture we had always known. We collected some stones, & shells from a small beach there, & sat & enjoyed the lovely mild stillness.

We dined handsomely on the most delicious fresh fish at the Club in the evening, & walked back to our Motel. We had a good night's sleep, with no unpleasant odours disturbing our slumbers.

Australians may be aware of the story of the Killers of Eden. They were Killer Whales, (Orca) who used to help the fishermen to round up whales. Our Grandfather had told his children stories of the 'killers'. There is a Museum in Eden, which has the skeleton of the leader, "Tom" as he was known, & he has worn teeth, where legend has it he towed the boats with rope, which wore his teeth down. 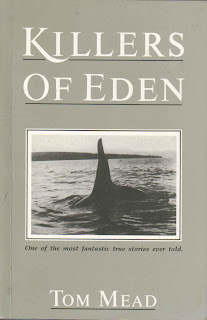 Our mother had tried for years to obtain the book to read, & we were able to purchase it from the Museum. We were greatly intrigued with the museum, & all it had to show.


We visited local potters, & purchased some beautiful pottery. We really enjoyed our stay there. We went to the Cemetary at Aslings Beach, hoping to see relatives graves, but an old man told us the sea had been very high & a lot of the graves had lost their marker stones, & a lot of information had been lost. We never found any relatives to our knowledge but some of the names were familiar to our family. We purchased 'friends of the cemetary' membership, & were promised newsletters. We still await some!


We drove on, to Wonboyn, & there, my BB was siezed by some sort of brain snap. He became determined to reach the Lagoon, which seemed to be only accessible via a rutted, rough track up through large Gum trees. Up a steep incline. Some grinning fishermen assured us it 'wasnt far'. We became acquainted with our first 'Composting Toilet" which was supposed to be environmentally friendly & non odourous. I dont know what went wrong, but the odour would not let one linger!

And, we never did reach the mythical lagoon. I became extremely alarmed, as we rose in perpendicular position, & hung precariously off the side of the hill, & reminded my BB that our Rental car was not insured for any damage on non metal roads.. haha, let alone deeply rutted bush tracks. So eventually he abandoned his dream, & we managed to get out into relative civilisation again. I say relative, as we needed some petrol, so stopped at a 'friendly, local, little petrol pump'. Never make assumptions about the 'locals' being friendly! Or helpful. It appeared to be a 'steam operated ' pump, & we were cursed for being ignorant, & dumb, for not knowing about such antiquated pieces of equipment.
As I recall I think it required hand pumping to prime it....


And so we left that somewhat desolate area, & proceeded down to the State of Victoria, where we stopped at Cann River, & were most impressed by a wood carver's, lifesize, wooden motor bike, & various other works of his art.

We travelled back into New South Wales, & on up through Bombala, (more rellies lived there, but we didnt stop) Nimmitabel, which is another blog for another day! And on to Canberra, where we spent time at the National Art Gallery, & were greatly amused to discover the huge ball sculpture of the world, which hung outside the Gallery, was made my a New Zealander! And we visited The High Court. And laughed at many things & events. All for other tales.


****
EDIT. My brother has reminded me, we stopped at Fairymeadow which is a suburb of Wollongong, on the way down, & it was in fact on our return trip that we stopped at the Evil Motel at Batemans Bay.
And it was Cann River, not Cass.
Posted by meggie at 4/21/2007 03:42:00 pm

My name is on a couple of the bricks used to make the 'new improved' museum. It looks fantastic now.

Have you ever been to Warrnambool, VIC ? I love their museum.

Meggie ,
That was a wonderful trip indeed . The smell of Batemans Bay will live with me forever though too. The stench of a thousand steaming whatsits !
Wonboyn to you. I am certain I can find evidence that it was Wonboyn where our Grandfather was born HaHa .
It was the beach I wanted to reach , not the lake -- The State Forest wasn't too friendly to travel through though , & you were right about the rental car .
Hard to believe it was so ago since the trip .
I think the whalers used to harpoon the whales mark the place and leave them to sink-- the Orca themselves used to get the tongues and the whales would refloat in a few days to be towed in and cut up . A terrible thing to think of in these days .
Yes indeed -- Picket Fences -- we bought the pickets for the Cemetary fence - Where are the certificates we were promised ? HaHa. I think I read somewhere that there had been further storms and erosion by the sea since we were there.

H & B, I was going to mention you in my post, as I know you didnt have happy memories of your childhood there, but really, it is a lovely little place, & we felt very happy there.One day I will get back there to visit again.
H, We sure did have fun on that trip! Sometmes I laughed so hard, I thought I would die!

It sounds like you had a fun trip. It's always interesting to go back to your origins. The stinky toilets have probably long since disappeared and although they were a pain at the time I'm sure, they add alot of humor to your story.

Isn't it great to be so close to our siblings that we can take a trip like that in adulthood and have such a good time. I have a sister that I go on trips with and it feels like we never stop laughing. I'm glad you and your brother can still laugh about the smelly motel unit..these things can and do take on a legend of their own. LOL
To go back to where your
Grandfather was born must have been something..! and the story of the Orca's is fascinating.
A visit here is always worth the time, thanks again for a great post Meggie..
Hugs
xx

I don't have bad memories of the TOWN so much , Meggie ... i've since been back and I think it's a lovely spot and speak of it highly.

It was my homelife that was the problem. When the 3.30pm schoolbell rang, I was filled with dread. I could have been anywhere, it wouldn't have mattered where I lived.

Have you ever heard of a play called And Tonight We Anchor in Twofold Bay by Katherine Thomson? It was produced by Theatre South in Wollongong and it was based on oral history of the whole fishing/whaling life.

Stomper, how interesting. No I hadnt heard of the play, should try to get a copy.