The story of the lone tree continues on. Standing out against last evening's lovely soft sky tones. 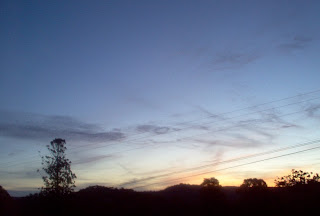 I dont know what type of tree it is, but much as I love trees, I dont like these. I find them ugly in their pattern of growth, & I cant understand why anyone would plant one. There are two on this property, & I wonder, each storm we have, how long they will survive.
Long after I am gone I would suspect.

Which brings me to my thoughts of mortality, & the idea that nothing will matter in 100 years. Well, nothing that made personl misery at the time, anyway.

This is a love story, with no happy ending. It was/is a modern tragedy, & leads me to wonder why some people seem to have blessed lives, while others have only sadness.

The story began before the storm clouds of World War 2 gathered in force.
Young men were urged to join the Forces, & though conscription was not in force, there were plenty of volunteers, who felt it their duty to enlist, in one or other of the Armed Forces.

Though the young man could have been exempt, for perfectly legitimate reasons, he decided to join the Army. His mother pleaded with him not to go, but he ignored her cries, & joined anyway. He argued he had an older brother who could take care of the farm, & sisters of good health, to help.

He had long loved a girl a year younger than he, & he begged her to marry him. She loved him too, but she tried to tell him it would be better to wait. His mother pleaded with the girl not to marry him. He became determined to marry her, & begged & pleaded, against all family opposition, until finally she gave in, & they were married quietly in a little local Church.

There was no time for a Honeymoon. He had to return to Army camp. He had brief leave, & they spent time together. Then it came time for his departure.

The young wife discovered she was pregnant soon after he had gone, & in due course, their daughter was born.

The letters & mail were very sporadic, & the young husband was posted in Italy. The tales of terror he endured were not spoken of, in carefully censored letter home. He had learnt of his daughter's birth, & wrote about returning.

The young wife managed alone with the fractious child, and she stayed with her parents for some time, but could see it was hard for them. She was offered a home with friends who had a large farmhouse, & sisters whose husbands were also off at War. There were other children about the same age as her daughter. It worked very well.

There were parties occasionally, & war time 'fun' was hard to find, so the parties were eagerly attended.

The young, lonely, sad, wife had a little too much cheer, at one such party. A stay-at-home man, took advantage of her inebriated state, & slept with the wife. Once. She once later described it as a drunken moment of madness.

To her horror she discovered she was pregnant. Her eldest daughter was only 2, her husband was still away overseas. What could she do. She contacted the baby's father, who was married. He offered her money for an abortion. It was war time, there was no such thing as legal abortion. She declined his money. She told her parents, who were bitterly upset. Her friends sheltered her, & the pregnancy continued.

She gave birth to a healthy small girl. She didnt know what to do, so she kept the child. Who was a very good, quiet little baby, & not fractious like the older child at all. It was 1945, the war ended. The soldiers were returning home.

And she was haunted, & lived in terror for her husband's return. Her mother-in-law found out about the baby. She burned with hatred. She determined to be the first to meet her son, who returned to the country when the illegitimate child was 6 weeks old. She rushed to meet him at the train station, before the wife could meet & talk with him. His mother told him the terrible news.

Who knows how the poor young husband felt. His only comfort in his terror filled days, had been thoughts of his young beloved wife, & their child he had yet to meet.

He had been altered psychologically, & scarred mentally, by his war time experience, then he came home to discover the hideous truth waiting for him at home. He consulted with friends. He turned against his mother for ever, & became very bitter toward her. He never forgave her, for delivering the news, or for trying to end the marriage.

Finally an ultimatum was issued to the young wife. A Sophie's Choice. Choose a child. She could either keep her eldest child & adopt the younger out, & continue with the marriage, or she could keep the younger child, & he would take his daughter, and leave.

She chose to keep her older daughter, & continue in the marriage. The younger little child was adopted. It broke her heart forever. There was another child born, a son. But the marriage foundered, & they parted when the son was under a year old.

She remained single & lonely & always broken hearted all the remainder of her life. She had a lot of love for her husband, but she said they were both so altered, they could never go back.

The young husband remarried, & had more children, but the marriage was not the happiest, & he too, kept the love for his first wife, all of his life.

When the 'young wife' was 64, the little baby she had given away, contacted her. She was overjoyed, but very trepidatious, as she had never told her two other children what had happened. They had no idea they had a sister. And they had no idea of the terrible tragedy, & suffering their parents had gone through.

They just felt such compassion for their poor suffering mother. No wonder, when she died, half her heart was damaged beyond repair- broken in fact.


At least she came to a sort of peace once she met her little abandoned 'baby'. Her 'baby' bore no resentment, & says she is just happy to be alive, & she had a wonderful childhood with parents who loved her dearly. And her newly discovered siblings were delighted to meet her, & have her in the family.

Too bad life is not like the movies, where all the problems are solved in the allotted few hours, and everyone lives happily ever after... Some peoples' lives are ruined forever by foolish youthful mistakes.
What is the name of the tune you've had on your last few blogs? it is lovely....

Oh, goodness. What an incredibly hard situation and a sad story. Like having a tooth yanked out without anaesthetic, and having the space hurt the rest of your life every time you run your tongue over it. There isn't ever really joy in such a situation, just some times that hurt a little less than others.

My heart goes out to everyone involved.

What a sad story. I can't imagine having to chose one child over the other. No wonder the marriage didn't last.

Hi
M, the Music is Memories on Alhambra & the music info is on the right under the world map. Just click onto the logo, & the site will come up. I love classical guitar, & most guitar music.

I am forever reminded of how real life seldom imitates art.
The pirce paid by everyone seemed dispropotionately high, compared to real wickedness, which seemingly goes unpunished.

Isobelle, that would be disproportionately, obviously!! haha.

That is a sad story. I hate the idea of having to choose one child over the other. Now that i've had children, I don't think I would be unable to watch Sophie's Choice.

What a terrible tragedy. How hard it would be to pick one life over another!
Life sometimes seems like a lottery sometimes you win and sometimes you loose. Some people seem luckier than others but I guess it is just how you look at things.

What an awful choice to have to make. I'm not sure I could handle that sort of ultimatum without breaking.

Meggie ,
Being familiar with your sad story ,I also know that along with the life long heartache and grief endured by both the young wife and her husband there was also , & still is , much love ,devotion, compassion , understanding & even joy too.

This story gave me goosebumps, so beautifully and compassionately told. I'm assuming you know the players? What a very difficult choice the young wife had to make,and what a gorgon of a mother in law she had. We all make mistakes, but some of us are fortunate enough to be able to hide them.

I am glad the siblings are all together again.

I wonder if that mother, given the chance would have chosen differently. We never know what life has in store for us. I imagine those days were so different and peoples opinions mattered. So sad, but because of the mothers selflessness the child had a chance at a normal life, with two parents who loved her.

That is such a sad story Meggie. The world has come far in those intervening years.

In some ways, I think it is a shame that morals are looser now, but then, I also think that we are better off now, more educated about our bodies, and certainly have more choices when it comes to deciding what happens to it.

But there was a happy ending as such, the mother and her baby finally met up again.

God what a heartrending story.

Warmest blessings and thoughts to all those in the story, whomever they are(?)

Meggie, your stories are amazing. This one is so very sad.

You're right about life - it's deeply mysterious on so many levels.

what a sad story. I would hate to have been in the position the mother found herself having to chose between the two children.

Meggie ... a beautifully written and moving story. The lives of "quiet desperation" that surround us all never fail to reinforce, in my mind anyway, the strength of the human spirit to survive.

Heart breaking. Thank you for sharing this story!