Two more Teds of the Hug, just 'test driving' the quilt top.... which is still not backed or quilted... slinks guiltily off into the chair by the computer. 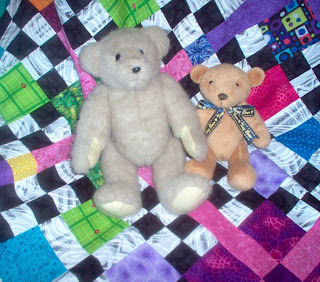 I did actually make a start on a table runner, but Murphy or Sod or someone who is charge of stuff-ups, came for a visit. So it is on the back burner.

We had some friends to visit yesterday, which was very enjoyable, so who cares about sewing mistakes!

I have always been very interested in 'crafty' activities. I once won a Highly Commended for a Peg Doll competition with a Radio Station, when I was about 10. When I heard my name read out, over the radio, I was so embarrassed, I blushed & felt 'naked', & I decided never to enter competitions again. And I have largely kept to that decision.

But I lead a fairly 'sheltered' childhood compared to some others. I can remember seeing into other lives, & being stunned & amazed.

No one ever got really 'drunk' in our family life. At Christmas our Grandmother would have her one sherry & get giggly. Our Uncles would drink beer & get very merry. Our mother went occasionally to the races for a day out, & she would come home smelling odd, & seemingly happy, but we didnt have to witness drunken behaviour, in a real sense.

A new family came to our little town, & moved into a house near where we lived. A new Primary School had opened just down the road from where we lived, & the parents in this family were the Headmaster, & a Mistress in the new school.

I became firm friends with the eldest girl, who was R. An odd thing about the family was the fact that the father's name was L, his son's name was L, & the younger sister of R, was also L. So it made for confusing times, & so they decided to call the children Big L & Little L, with the father being the shortened version of the name.

The mother was C, & she was a very artistic woman, who was skilled at many crafts, & loved to paint.... & drink alcoholic beverages. L the senior also loved to drink alcohol. The children lived in chaos, & tried to absent themselves when they could to avoid the drunken brawls which were apparently part of their daily life.

C offered to teach R & I how to paint on silk, & so I took myself along with fabric, for the lessons. It was lovely, & I felt a great sense of achievement when I finished. But I was a bit stunned at the state of the house, on my first visit. There seemed to be washing lying all over the house, empty beer bottles, & dirty dishes. And the two faces of C were very disconcerting! She was so charming, & delightful when she taught R & I how to use the paints. She had a pretty face, & a tinkly laugh.

Then she left the room, & we heard this 'devilish' voice from hell, screeching from the next room! Shrieking at Big L, to get the dishes done, get the washing on, do this, do that! Along with rounds of cursing, & swearing, the like of which I had never heard before! I was so shocked at first I started to laugh, nervously thinking it was a joke.

But then I saw the faces of my friend & her sister, & realised it was no joke. It was almost impossible to believe it was the same woman, when C returned to the room, all charm & smiles again. And each time I went to the house, I would witness the same sort of thing.

And that was my introduction to the home life of R. She told me at school, that life was like that all the time at home, & of course the alcohol accelerated it all every evening, when both parents got blind drunk! Who would have ever thought. They presented such a happy public face. I never told my mother, for fear of not being allowed to go back.

R had suffered Osteomyelitis, in her hip, & so she caught a bus to & from school, but the brother, Big L, used to ride his bike, as I did. And he used to infuriate me by insisting on riding beside me on the way home from school. I dont really remember why I hated him riding along side me, but I dont remember talking to him much, so it cant have been the conversation. I was never keen on physical exertion, as my face always went beet red, in Summer, & it would stay that way for hours afterwards. Perhaps I was embarrassed at my beet red face.

I had another very good friend from early childhood, & I often stayed at her house, but nothing like that ever went on there. The worst things that happened there were usually caused by us, playing music too loudly. Or when we got older, sneaking her father's car, to go to the beach or down to the local Coffee Bar, to sit in the gloom, & perhaps sneak cigarettes, feeling 'sophisticated'.

I remember my first 'real' boyfriend's house, where I used to stay at the weekends. He had 3 brothers, & they lived in a very small house, so I got to sleep with his mother, because they didnt have a room without a male in it. Luckily I really liked his mother, & she liked me, so we didnt have a problem. I went out with that boy for almost a year, until he went to work in another town. I remained friends with his mother for years.

Looking back, I suppose we did have quite a sheltered childhood, & a 'safe' one, even though we always felt the lack of our father so hard.

It's amazing the way some kids have to live. I was so lucky to grow up in a peaceful household. I never saw any drinking or fighting. Recently my Dad told me that he and my Mum never had a fight. We were poor but that didn't seem to bother us at all. We always had lots to eat and since my Dad loves horses, we always had a nice horse to ride. It doesn't get much better than that.

I didn't see drinking in our family either, but I well remember a neighbour who did..!
He was Dad to about 7 kids, and they were always dirty and arguing. I remember the dad coming home when the pubs emptied, rolling up the street, and waking everyone with his shouting. He would stop in front of every house and yell at the occupant's and tell them what he thought of them.
Every Sunday the family would get cleaned up and walk off into the town to go to mass. they would come back without dad, and he'd come home at night and repeat his performance.
His eldest daughter was my age, and I was always embarrassed for her, as she was a very clever girl. I often wonder what happened to her.

Your feeling 'naked' when you won a competition made me smile. Got to be better to be like that than agressively competitive though.

Maybe the offspring in those families develop a great deal of resilience. How awful, though, to live like that. You must have been a very instinctive child to see all that going on, and instinctively keep it to yourself.
Well I'm off for another glass of cab sav and yell at the kids....
(joking;-P)
I have noticed, in my explorings, that there seems to be a huge number of quilters who blog. More so than any other craft, it seems.
Why is that, would you think?

Becfause Fifi, us quilters are friendly, chatty types who like to share! Meggie, I've often heard that you should never wish to be someone else as there's no knowing what kind of tradgedy or sadness lies behind their front door, no matter what a brave public face they put on....

Another precious memory. Thank you.

And I'm sure you truly appreciate that sheltered childhood you had. Yes, lucky you.

Love the quilt under the Teds, could they move for a photo please.
I too had a sheltered childhood. But can remember my father telling of Sunday dinners on the floor...will write about that on my blog, if you don't mind my following on your theme. Other Lives or maybe Behind Closed Doors.. AUBIRDWOMAN

Maybe you represented the sort of calm stability that that little boy longed for and that was why he wanted to walk with you!

Such a pretty quilt! I love the vivid colors.

There are people who are mean drunks, or just mean period, and are out to put on a show for the world. Nice as can be when they're out in public, and others simply can't believe what the person has done to you in private and think you're lying.

As my husband somewhat acidly said, "Why of course spending ten minutes with someone when they're on their best behavior should trump thirty years of your bad experiences with them!"

Poor R. I hope the rest of her life went well and that she didn't end up in an abusive marital relationship.