This rather threatening pic was taken last evening, after the feathery clouds. This was about 6pm. I am not sure why I like it, but I do. 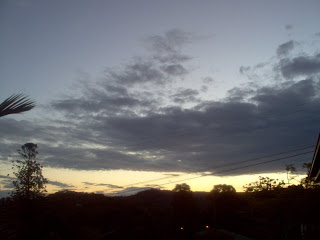 This morning has dawned clear & totally cloudless. Lovely & crisp without being too cold.

I have been thinking about the events, that, in our family, we call 'toothaches'. They are things we have witnessed or done, that come back to haunt us, & can often be the cause of anguished regret.

I am sure everyone has some of them, in their life. Sometimes quite small occasions, that just niggle at the edge of the memory, just like an ongoing tooth ache.

I have a small one from High School. I had a friend, M, with the same Christian name as mine, & we were always together, always sat together in classes, & spent all our luch breaks etc, together. We thought we were pretty smart, ~ she was good at maths, I was hopeless, so any questions directed our way, by the teacher were answered by M. And any questions directed our way, concerning English & poetry, were answered by me.

We had nicknames for all the teachers- I guess that is usual. We had lockers where we kept our books & during the dash between classes, we would go to the lockers, & get out the next required class books.

The 'toothache' occurred at the lockers. We were both crouched down, laughing about one of the teachers, & I made the comment that she was 'insipid'. A voice behind me, said loudly, "She might think you are insipid too!" I was shocked. It was the English Mistress, -not the one we had been criticising, but it made me stop & think carefully about criticism, & how much it might hurt someone. I am not sure why it has remained a toothache, but I have never forgotten it. I guess it was a valuable lesson.

There are other toothaches, which my daughter & I talk about. Some are my personal ones, & there are some that are family aches. I have one from when my brother came to stay with me, BC -before children. I was, in fact vastly pregnant & GOM was still the Happy Young Husband. One evening I made some dessert or other- have forgotten what it was. But there was whipped cream to go with it, & my brother was enjoying it hugely, & dived in for more. I snapped at him to "leave some for HYH". His face fell & he finished his dessert quietly. The toothache comes from the fact that later, when HYH came home, he didnt even bother with dessert. A stupid little thing, but it has stayed with me forever. My brother probably doesnt even remember it. I asked him once, but he said he had forgotten.

Once, while on holiday, we witnessed a result of an accident. When I say a result, we had heard a screech of brakes, & heard a thud, & when we looked there was a man lying in the road. He had apparently been hit by the car, & he was sprawled out with his arms flung ahead of him. And there, by one hand, was a hamburger, with one bite taken from it. I can still see it. Somehow it made it seem worse. And no, I dont know if he was alright, as he was still on the ground, appearing to be unconscious, when we hastened away, not wanting to join the crowd of ghouls.

And when I told our children that story, they wished I hadnt, & my daughter tells me it is still a 'toothache' in her memory.

Most of my toothaches involve my family or friends. I dont let them engulf me, but from time to time, they stab me in the memory, just like the root of a tooth dying.

When my children were young, one of their favourite books was "Frog & Toad are Friends". We all loved that book, & I would read it repeatedly to them, until they learnt to read it themselves. My 'toothaches' remind me a little of that book.


In my last post, there is a comment from Henri, who is my Beloved Brother, & he mentions the " Cyrils". That is what BFJ & I used to call the 'duds' who came courting, or the ones who didnt turn out to be what they seemed.

BFJ & I used to go dancing. We would rather go dancing that go to the movies with a boy, some times. And quite often we would be asked by a partner if they could 'take us home.' Looking back, it was quite a risk I suppose, but times were different, & most men were basically just looking for a girlfriend. We met a lot of very nice men, dancing. One of our girlfriends met her future husband at a dance. We were lucky really, because young ones these days only seem to have Pubs or Clubs to meet other young ones.

Inevitably, we would strike the 'Cyrils'. The ones who smelt funny, or the ones who tried to 'take liberties'. Or the ones who had seemed sober & nice, but must have sneaked outside to drink, to get 'courage', & they would be positively drunk, by the time it was time to leave. Then we would make hasty changes to plans.

One night BFJ agreed to go home with a 'Cyril.' She said he seemed nice, they duly went to supper together, then returned to dance some more. She said, then she suddenly noticed he had all this thick hair sprouting from the top of his shirt collar! Above his neat tie. She couldnt take her eyes off it, it mesmerized her! She decided he must be some sort of werewolf, & so she suddenly 'discovered' that she had forgotten she had agreed to go home with me.

We both had our share of Cyrils. And BFJ used to often stay at our place, & we would have my mother in fits of laughter describing our 'adventures'.

meggie...I think I call toothaches ~ hindsight, and as I told my kids, you don't make mistakes you just learn what not to do again. Love you posts... aubirdwoman

Ah, Meggie , I can well remember saving J. more than once from the unwelcome clutches or earnest attentions of some ' Cyril 'or other when she returned late at night , knocking on the door and needing to get into the flat quickly .haha.
I don't remember the dessert 'toothache ' incident at all -- Banish it forever from your thoughts .It may have taught me some manners ! I do know that I am always careful to ask everyone around the table if they would like more of whatever I may fancy a little extra of ,before I take any .

Meggie, "toothaches" is such a good name for them! I have some of them myself. Maybe they are hindsight as smc says, but they do come back pretty regularly to haunt me.

What a great term - toothache. Your story about your friend and the resulting thoughts about criticism brought on my own toothache. I will never forget my English teacher asking me to stay back from class at which time he told me I was "the rudest of students" - and this stunned me. I used to talk continually in his class and think nothing of it - so therefore I was VERY rude. From that day I never spoke out of turn in his or my other classes. I just didn't think how my actions were affecting others - this was one of my first "lessons" in doing so and it comes back to me often.

great post! I have lots of toothaches but you also got me thinking about lots of good memories too.

Hi All, I dont think 'toothaches' are hindsight, so much as little things we regret for a long time...some of you agree with me.
But of course many of them are 'life lessons', but there will always remain the 'what the hell was I thinking' factor....Or why did that happen??
I love to get your comments & try to answer the thoughts therein.

Oh Meggie and I forgot to add to my previous comment a big thankyou for "thinking" of me for the blogger award a couple of days ago. It is truly heartening to be thought of in that way and very humbling. And all of those thoughts straight back at you :-)

Know these "toothache" moments so well! They're the ones that make me cringe and even my teeth feel a little funny!

BFJ and me both on the thatch business! Grooossssss!

Almost all of us have toothaches - the only ones who don't are those who are so oblivious that they don't realize that they, too, make mistakes.

I loved your term "Cyril", too.

I've always thought of the toothache thing as "sheet-kickers". You know, when you're lying in bed trying to fall asleep and you suddenly remember what an idiot you've made of yourself and you have to kick the sheet to make it get out of your head? Or is that just me ;-)